The Failure of "The New" Tag Teams


The first ever tag team wrestling match was believed to have occurred in San Francisco, California in 1901 but didn't catch on until the 1930's outside the Bay area. Tag Team wrestling has a long and storied history and there have been many phenomenal tag teams.

In my time you had The Rock n' Roll Express, The Road Warriors, Demolition, The Fantastics, The Midnight Express, The Andersons, The Brain Busters, The British Bulldogs, and now American Alpha, The Revival, and DIY tearing it up inside the squared circle.

Overtime tag teams break up, get back together, and sometimes they become "New".  Putting the word "New" in a tag team name generally doesn't work out well for that team.  I give you examples of "New" tag teams that didn't cut the mustard compared to their predecessors. 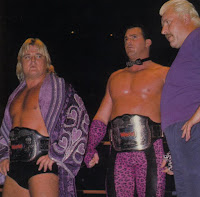 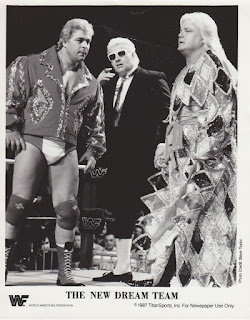 Greg "The Hammer" Valentine and Brutus Beefcake with manager "Luscious" Johnny V first teamed up March 25, 1985 in Brantford, Ontario Canada at an All Star Wrestling television taping.  They defeated Rick McGraw & Jim Powers in short order.  Valentine was still the Intercontinental Champion at the time.

On July 6, 1985 in Baltimore, Maryland Tito Santana defeated Valentine inside a Steel Cage to win the championship.  Three days later on July 9th The Dream Team would get their first shot at the WWF Tag Team Champions: US Express: Mike Rotundo & Barry Windham losing in  a dark match at the Mid-Hudson Civic Center in Poughkeepsie, New York.  They would win the titles Augusta 24, 1985 at a house show in Philadelphia, PA and hold onto them for 226 days until dropping them to the British Bulldogs at WrestleMania 2 on April 7, 1986.  They would chase the titles the next few months but never regain them.

The New Dream Team was born out of WrestleMania III after the Dream Team defeated the Rougeau Brothers with help from Dino Bravo.  Bravo had been teaming with them in six-man tag team matches leading up to the event and apparently Beefcake must not have been pulling his weight because even though they won the match he was kicked out of the group.

The New Dream Team tagged together for the next few months with a few title shots against the Hart Foundation before having their final match as a team in the 1987 Survivor Series. 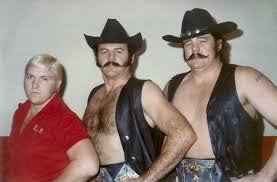 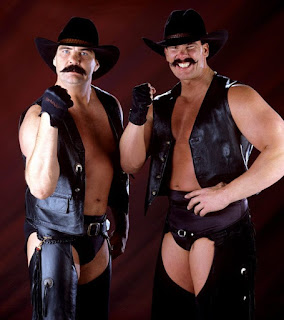 The team of Blackjack Mulligan and Blackjack Lanza toured the country for 13 years collecting major championships along the way.  They also main event many cards in singles matches including competing against Bruno Sammartino for the WWF World Heavyweight Championship.

The New Blackjacks did have a couple title matches with Owen Hart & British Bulldog but accomplished little else.  The team broke up when Windham turned on Bradshaw joining the Jim Cornette lead NWA Stable.  You can read all about the NWA Invasion of the WWF here.


The Rockers / The New Rockers 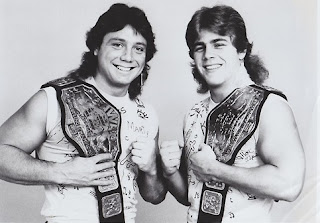 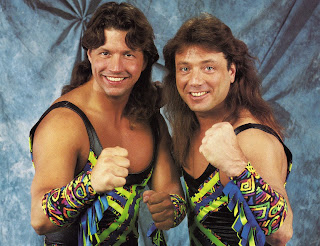 Shawn Michaels and Marty Jannetty first teamed in NWA Central States Wrestling winning their tag team championships on May 15, 1985 only holding them for one week.  They wouldn't adopt the name Midnight Rockers until early 1986 when they joined the AWA.  The would change their name to the Rockers until they entered the WWF in 1988.  On December 3, 1991 the famous Barber Shop segment was recorded when Michaels threw Jannetty through the window thus ending the team.  However this segment did not air on television until January 12, 1992.  Their final match as a team was December 30, 1991 in a loss to the Beverly Brothers in Green Bay, Wisconsin.

They would team up once again March 14, 2005 on WWE Raw defeated La Resistnace in Atlanta, Georgia.

Marty Jannetty returned to the WWE in early 1996 initially as a singles competitor before he began teaming with Al Snow who was renamed Leif Cassidy.  They duo portrayed a pair of comedic heels akin to the 1960's The Monkees.  The duo broke up when Jannetty left the WWE. 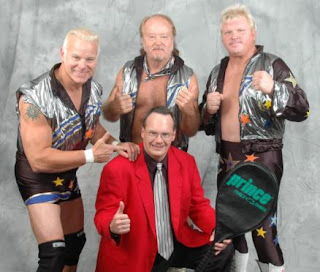 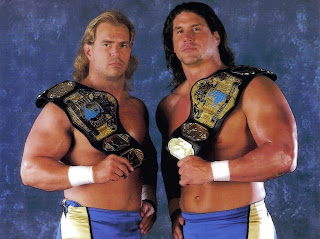 The original Midnight Express has a long and storied history in wrestling with the two most prominent incarnations being Condrey & Eaton and Eaton and Lane.  There are plenty of sources on the internet where you can read about them.  I had the please of meeting to duo of Eaton & Condrey on two occasions.  The first briefly at a signing at Carson's Pro Wrestling World in Allentown, PA.  The second a bit longer at the 2009 NWA Legends Fanfest in Charlotte, North Carolina.  One night during the weekend I found myself, beer in hand, somehow standing in a small group of a couple other fans with Dennis and Bobby as they told stories and we all had a fantastic time! Both genuinely nice guys.