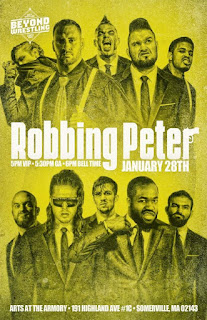 Here is my review of Beyond Wrestling's Robbing Peter on January 28 in Somerville, Mass:

Match 1: The Secret City Soldiers: Anthony Stone, Davey Cash and Kris Pyro defeated Biff's Kids: Ace Romero, Xavier Bell and Sully Banger
This was kind of a squash to put over the Secret City Soldiers. Biff's Kids fought hard but they didn't really last long. For reasons I don't understand Sully Banger was kind of over with the crowd. I've seen him wrestle 3 or 4 times now and I just don't see it.
5.75/10

Match 3: LuFisto and Jordynne Grace defeated Davienne and Belmont w/Sammi Lane
This was nothing more than a squash. Belmont took a vicious powerbomb on the ring apron leaving Davienne to get annihilated.
3/10

In Ring: Veda Scott comes out with Ryan Galeone for her scheduled match with Sonya Strong but Strong wasn't there. Veda then challenges anyone man or women to a match but nobody comes out.

Match 4: Ryan Galeone w/Veda Scott defeated Warbeard Hanson
Good big man match. Galeone is a very talented as a wrestler but has the personality of a rock. Hanson on the other hand is really growing on me. Veda Scott got involved many times in this match. Galeone got the surprise with with a dead-lift powerbomb that looked kind of weak.
7/10

Match 5: JT Dunn defeated Brian Milonas
Good match with JT playing the underdog and taking a ton of damage early on but came back to get the win with a roaring elbow to a downed Milonas. I can't say it enough, Milonas is an awesome 400 lbs wrestler. Why he never made outside of the New England area before this year is beyond me.
7.5/10

In Ring: JT Dunn says that he is the best in Beyond Wrestling and everyone is gonna find that out. He says that he isn't going to leave until he beats the hell out of Dave Cole. JT goes over to Cole's paintings and trashes them. Cole gets pissed and tries to attack JT with the pointed end of a bunch of paint brushes but it gets broken up. Rich Palladino then announces that Cole vs. Dunn the next night in Worcester is now No DQ.

Match 6: EYFBO: Angel Ortiz and Mike Draztik defeated The Pretty Boy Killers: Keith Lee and Shane Taylor
Good match with EYFBO playing the underdogs. They have become one of my favorite tag teams. They are great wrestlers and are very entertaining. The crowd really loves Keith Lee but I am over him. He just doesn't really do it for me.
7.25/10

Match 7: Massage NV: Dorian Graves and VSK defeated Alpha Sigma Sigma: Big Daddy Beluga and Anthony Greene w/Patty Boom Boom the Blow up Doll
This was a comedy match and not a very good one at that. I don't like comedy matches which made me not like this one even more. Greene was wrestling in street clothes which was weird and I can more than do without the Big Daddy Beluga gimmick. Massage NV popped the Blow up Doll with popped the crowd.
2/10

Match 8: Joey Janela w/Penelope Ford defeated David Starr, Jonathan Gresham and Jon Silver in a Fatal 4 Way
Good match but seemed kind of rushed. Some fast paced action but was way to short. I would have enjoyed at least another 10 minutes. Janela got the win with a tombstone on Starr then stole Starr's WXW Shotgun Title.
7/10

Match 9: The American Wolves: Eddie Edwards and Davey Richards defeated Da Hit Squad: Dan Maff and Monsta Mack
I really enjoy Da Hit Squad and they put on a good performance here and did the Wolves. Good back and forth action with both teams beating the hell out of each other. There was a very scary spot where Monsta Mack went for a suplex on the second rope on Richards but seemed to lose his balance and they fell to floor hitting the ring steps on the way down. Fortunately both men were fine and continued the match. The Wolves got the win with a brainbuster/spin kick combo.
8/10

Match 10: Brian Cage defeated Donovan Dijak
Good main event with a great mix of power moves and high flying. The story going in was that Dijak had lost his last few matches and wanted to avenge his loses but Matt Riddle is the only one left in Beyond that he lost to. He wanted to fight Riddle but Riddle wasn't there and was fighting Cage the next night, so Dijak challenged Cage and was going to destroy him so he couldn't fight Riddle and Dijak would take his place. It didn't end that way because Cage got the very hard fought win with a suplex screwdriver. After the match Mikey Webb came out to check on Dijak. Dijak then took the mic but wouldn't talk because he lost yet again.
8.75/10

Overall this show scored a 64 out of 100 for a 64%. This show is worth checking out. There are some dumpy matches but the good more than out weighted the bad. The main event lived up to what I expected and Dunn vs. Milonas surprised me.