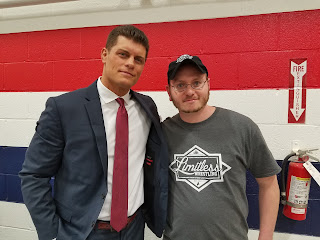 Here is my review of Limitless Wrestling's Unreal.

Match 2: The Maine State Posse: Danger Kid and Aidan Aggro defeated Tyler Nitro and Cam Zagami w/Mike Gamble
Good tag match. MSP is ever improving and is super over. I like Tyler Nitro but I'm still not quite sure about Zagami
7/10

Match 3: Troy Nelson defeated Mike Gamble w/Cam Zagami
This didn't really do it for me. I would have much rather seen Nelson battle someone better than Gamble
3/10

Match 4: Connor Murphy defeated Anthony Gangone
This was a solid match. I was very surprised that Murphy won. I like Murphy and would like to see him become a regular. Gangone on the other hand, I still don't like him. He plays a great asshole heel but other than that he just doesn't do it for me
7/10

Match 6: Ace Romero and Anthony Greene defeated The American Destroyers: Donovan Dijak and Mikey Webb
Absolutely excellent! So many unbelievable spots. I don't understand how Webb didn't injure himself lifting Ace and the Canadian Destroyer from Dijak on Ace was sick.
10/10

Match 7: Brian Milonas defeated Warbeard Hanson, Max Smashmaster and Big Daddy Beluga in a Fatal 4 Way
Solid big guy match. I really enjoy Milonas. Warbeard is growing on me and I could really go either way on Smashmaster. Beluga on the other hand needs to stop using that gimmick. It was funny the first time but now I'm sick of it and kinda groan when he comes out now
7/10

Match 8: David Starr defeated Xavier Bell
Good match. One of the best Xavier Bell matches yet. How Starr didn't get injured when he crashed into the chairs next to me is beyond me - note: he damaged the chair my cousin was sitting in - ML
7.75/10

Match 9: Skylar defeated Jeremy Leary
I don't like Leary. I don't know why I just don't. I was really disappointed when the Minute Men couldn't make it cause that would have been a bad ass tag match. What we got was okay. A much better story to the match than Ricochet vs. Tessa Blanchard at Beyond Wrestling's Midas Touch. The tombstone spot was really scary
6.75/10

Match 10: Mike Graca defeated Adam Booker
Really cool entrance for Graca. Other than that really kinda average. Just like all of Adam Booker's other matches in Limitless
6/10

Match 11: JT Dunn defeated Cody Rhodes
Great main event. I had never seen Cody go like this before. JT proved why he is one of the best in New England. Just a great match
9/10

Overall this show scored a 79.75 out of 110 for a 72.5% score. Top to bottom this was just an awesome show. I enjoyed everything except for the Nelson vs. Gamble match. That didn't really need to happen. Ace and Greene vs. Dijak and Webb was unreal and Dunn vs. Rhodes was a great wrestling match. I would recommend this show to anyone who likes wrestling.

Later Readers!
Posted by Michael J. Labbe at 2:51 AM