On January 27th I attended Limitless Wrestling's Unreal event in Westbrook, you can read about it here.  The event was headlined by "American Nightmare" Cody Rhodes vs. JT Dunn, at the pre-show meet and greet I was able to get a few cards signed by Mr. Rhodes. 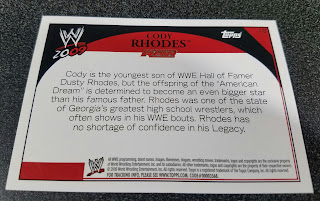 WWE Topps 2009 I like this card because it reminds me of some classic WWE cards from the mid 80's, especially the black background. 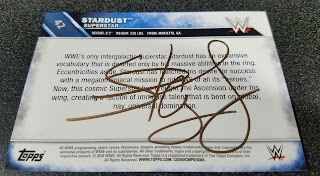 WWE Topps 2016 Stardust card.  Stardust was Cody's persona similar to his brother Goldust, that he used starting in June 2014 until the end of his run in the WWE. 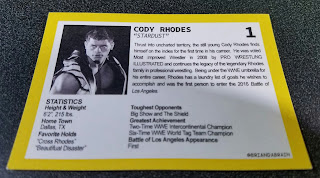 This card is from a fan made set celebrating the 2016 PWG Battle of Las Angeles.  Made by @briandbrain this set is in the style of the 1991 WCW Impel card set.

These three cards are a fantastic addition to my collection.  One thing I didn't notice until I took the photo of the three cards together is in all of them he is yelling.

Later Readers!
Posted by Michael J. Labbe at 4:53 AM