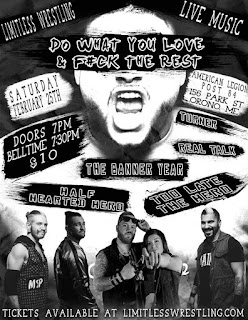 Here is my review of Limitless Wrestling's Do what you love and fuck the rest.
February 25, 2017 American Legion, Orono, Maine

Match 1: Danny Miles defeated Mike Graca
This match was really kinda average and at points kinda boring. Miles is a good wrestler but I find him painfully boring. This wasn't one of Graca's best matches.
5/10

Match 2: Mr. Grim defeated Manny Martinez
Decent match but Martinez is really generic. Grim on the other hand is really good and I would like to see him come back. Grim got the win with a jumping tombstone. After the match he put Martinez in a body bag and carried him to the back.
6/10

Match 3: Jeremy Leary & Skylar defeated Scott Wild & Jimmy Limits
Good tag match here. Wild works really well with Leary and Skylar. Limits did well himself and I would like to see him come back. Wild hit a vicious flying knee on Skylar that almost sent her flying out of the ring. After the match both Leary and Skylar attacked referee Chris Berry.
8/10

Match 4: Xavier Bell defeated Alexander Lee
There was some good ringside brawling but besides that this match was really kinda average. Bell got the win with a brutal piledriver. Nice to see Bell get the win! - Mike
5.5/10

Match 5: Foxx Vinyer defeated Sebastian Cage and Franco Vargo in a Triple Threat Match
I didn't care for this match and it barely kept my attention. Foxx is good as is Cage but this match would have been way better if Vargo wasn't there and it was a singles match.
4/10

Match 6: Tyler Nitro w/Mike Gamble defeated Anthony Bennett
This match was really average. Both guys are good but this match just didn't do it for me and it seemed kinda short. I'm not sure if they were under time constraints or not but if this one had been another 8-10 minutes it may have been better. I was kinda surprised to see Nitro get the win.
6/10

Match 7: JT Dunn defeated Sami Callahan
This was excellent! They beat the hell out of each other all over the place, including a piledriver through a table. Seemed a little short but it was great despite that. Check this match out.
9/10

Match 8: Ace Romero & Anthony Greene defeated The Maine State Posse: Danger Kid & Aidan Aggro
All four guys worked really hard to put on a good match and they did just that. Lots of brutal chops to to both Aggro and Kid. There were even a few moves I had never seen before, like the backdrop into a sit out powerbomb by Ace and Greene on Aggro. Ace got the win after a sick piledriver from Greene on Kid. After the match they teased dissension between Greene and Ace. The crowd was a little dead for the one and I don't think this got the crowd reaction it deserved.
8.75/10

This show scored a 52.25 out of 80 for an overall score of 65.31%. This was a good show where the two main events really stood out. Dunn and Callahan killed it as did the tag main event.

Later Readers!
Posted by Michael J. Labbe at 4:41 AM