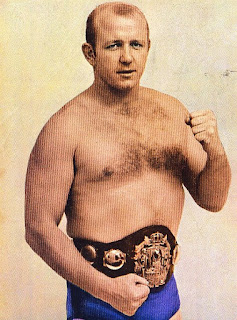 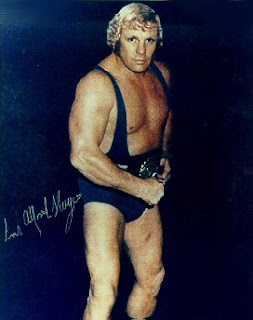 Lord Al Hayes came to the Amarillo Territory in late 1971 and quickly won the hearts of the fans when he upset hated villain Cyclone Negro and captured the Western States Title the area's top prize at the time. He had two disputed draws with favorite son and World Champion Dory Funk, Jr in early 1972. With the exception of Ricky Romero previously and Dick Murdock after Funk's reign never had someone come into the area with such popularity.

The match was billed for a month out and Hayes had promised he would break the famed spinning toe hold and counter it with his own devastating submission. Both men received astounding cheers upon their introductions, this was before entrance music practically ruined wrestlers introductions. Long time ring announcer Steve Stack always did it right.

Ken Farber was the referee, Junior removed his belt as he always did, with supreme confidence. They shook hands before the bell. I should preface as you read this, that my account has a different interpretation than Bill Apter's as he told it in THE WRESTLER magazine. I honestly never saw him there, I can't say for sure that he wasn't, I can tell you that I was only a few feet from ringside and this is what I saw and recalled.

Both were respectful and cautious of each other after trading holds and counter maneuvers. After around 15 minutes Funk locked Hayes up in a full nelson. Twice Hayes slip out only to have the champ locking him back up, however on the third try Junior cradled his legs for the pin and claimed the first fall. Hayes quickly jumped up to shake his opponents hand. It would be as warm and fuzzy as the two would get the rest of the match.

The second fall was evenly contested, to add a interesting twist Dory Funk, Sr. appeared and started filming Hayes with his home movie camera from various angles inside the arena. Funk starts to take control as he set up his famous finishing maneuver the spinning toe hold!  The crowd is at a roar and as promised the challenger swiftly breaks the hold, stunning the champ!  Hayes looks to the crowd for approval and somewhat to his surprise he gets it.  Could this be the end of Juniors run?  Quickly back on his feet Junior moves in again and reapplies the hold this time Hayes answers with a counter, a variation of the Indian Death Lock and Funk submits!

Tied 1-1 doubt suddenly crept in to a stunned crowd. The fans loved the Funk family to have competition, however unseating their beloved champion was a different story.  As the bell sounds for the final fall a look of focus crosses the champs face, or could it be desperation?

In an uncharacteristic fashion Funk becomes more physical looking more like his father or brother's style when suddenly Hayes catches the Champion in a counter hurling half way across the ring slapping on backside cradle locking it in tight near the ropes.  Referee Ken Farber goes in to count 1..2..3, however Juniors legs are drape in the ropes...the crowd goes silent.

Senior jumps to the ring apron in an attempt to let the ref know he missed Dory's foot in the ropes, he seems angered as he grabs a hold of his collar, as he does so Hayes reaches for the movie camera and rips the film from it. Senior responds with a hay maker across his jaw. Immediately Junior clamps on the double arm suplex, he covers for the pin and Farber counts to 3 awarding Junior the title.
Apter said that the Funks needed an escort out of the arena, all I know is that there was a line to pat Junior on the back as he made his way back to the dressing room as I was one of them.


For years I've tried to get answers on what the work was on the finish.  I even made several inquiries to Junior himself with no reply.  No surprise really as he always stayed pretty close to the cuff with Kayfabe. It's doubtful that that kind of finish was planned, the territory was never known for screwball endings and it had to hurt Funks credibility.

The most plausible explanation was Hayes had been known to go into business for himself and later on he feuded with Senior in which Funk out foxed him for the Western States Title, which could have been payback for trying to swindle Juniors belt. Who knows?

Dan Black
Posted by Michael J. Labbe at 3:38 AM