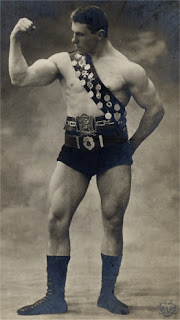 Born in August 1, 1877 in what is now Estonia, Hackenschmidt beginning his wrestling career in 1898 he won his first championship May 19, 1899 defeating Von Schmelling for the Russian Championship.  Over the next few years Hackenschmidt toured around world winning several tournaments along the way.  On May 4, 1905 in New York City at Madison Square Garden he defeated American Heavyweight Champion Tom Jenkins and in doing so became the first recognized World Heavyweight Champion holding the title for 1,065 days.

Hackenschmidt lost the World Title to Frank Gotch April 3, 1908 and their rematch in 1911 both in controversial fashion.  After wrestling Hackenschmidt lived in England writing and teaching physical eduction to members of the House of Lords.  He died February 19, 1968 at the age of 90. 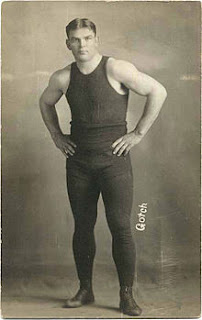 Born April 27, 1877 Gotch debuted in 1899 winning his first match against Marshall Green.  After losing a match to Farmer Burns in quick fashion he began training Gotch.  He would trade the American Heavyweight Championship with Tom Jenkins before going on to defeat George Hackenschmidt  for the World Heavyweight Championship.  Gotch would hold the championship until he retired in 1913 as champion holding the title for 1,824 days.

After wrestling Gotch joined the Sells-Floto Circus challenging all comers to last 15 minutes with him in the ring, if they did he paid them $250.  Gotch died from uraemic poisoning December 16, 1917 at the age of 40. 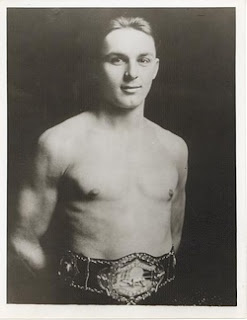 This is the last recorded match I could find even though info shows he retired in 1934.

Born April 4, 1893 Stecher began wrestling in 1912.  On July 5, 1915 at just 22 years old Stecher defeated Charlie Cutler to win the World Championship that had been vacant since Frank Gotch's retirement in 1913.  He would hold the championship for almost 2 years before losing it to Earl Caddock.  He would regain the championship twice more, last winning it in 1925 for a near three year run.  In total Stecher was a 3 time champion reigning for a combined 1,959 days.

Sadly, after retirement in 1934 Stecher was institutionalized at the St. Cloud Veteran's Hospital in Minnesota until his deat at the age of 80 on March 29, 1974. 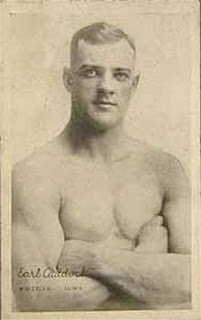 Born February 27, 1888 in South Dakota Caddock was trained by Frank Gotch and Farmer Burns debuting on June 8, 1915.  Just under two years later he would defeated Joe Stecher on April 19, 1917 for the World Heavyweight Championship in Omaha, Nebraska.

Caddock entered the Army during World War I serving from August 1918 to June 1919 while still being recognized widely as the World Champion other did lay claim to the title.  Upon his discharge Caddock would challenge these pretenders to the throne and on January 30, 1920 he would face Joe Stecher at Madison Square Garden to declare the real World Champion, a match Stecher would win.  Highlights of this match are available on You Tube here. Caddock would challenge for the World Championship a few more times before his retirement but was never able to recapture it.

After wrestling Caddock sold cars, tractors, and farm machinery in Walnut, Iowa until his death on August 25, 1950 at the age of 62. 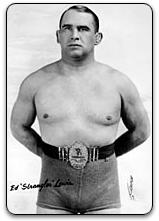 Lewis was born June 30, 1891 in Wisconsin, debuting at the age of 14 Lewis would go on the win the World Heavyweight Championship four times totaling 3,073 days as champion.  His nickname "Strangler" came from his sleeper hold finisher.

A member of the Gold Dust Trio, Lewis, with Toots Mondt & Big Billy Sandow are credited with the creation of "modern day" pro wrestling.  They established a travelling road show with cards featuring more than one match and were the first to use storylines and created worked feuds between wrestlers.  Lewis was a hooker who was capable of defeating anyone at will in the ring.  He is famed for having trained the great Lou Thesz.

After wrestling Lewis became and ambassador of sorts for the NWA.  Lewis went blind from Trachoma and dies in New York on August 8, 1966 at the age of 75. 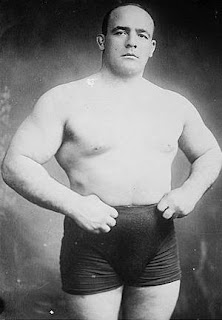 Born April 1, 1879 in Poland, Zbyszko performed as a strongman before entering wrestling in 1903 in Russia and Europe.  In 1909 he wrestled Frank Gotch to a one hour draw in New York City.  Zbyszko would win his first World Championship defeated Ed Lewis May 6, 1921 in New York City.  He would lose the title back to Lewis.  His second reign would come in controversial fashion when he defeated Wayne Munn on January 8, 1925 in Wichita, Kansas.  He had originally agreed to lose to Munn, however he accepted a pay off from Joe Stecher and beat Munn then lost the title to Stecher 45 days later.  Zbyszko would be a two time champion only holding the title for 346 days.

After wrestling Zbyszko and his brother Waldek would recruit and train wrestlers on their farm in Missouri including Antonio Rocca, Johnny Valentine, and Harley Race.  He died from a heart attack on September 23, 1967 at the age of 88.