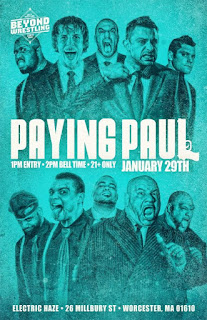 Here is my review of Beyond Wrestling's Paying Paul on January 29th in Worcester, Mass.

Match 1: Brian Milonas defeated Ace Romero
Good hard hitting, big man match. Ace was super over and he deserves to have a regular spot on the Beyond Wrestling roster.
7/10

In Ring: Dijak, Mikey Webb, Big Daddy Beluga and Anthony Greene come out and chase off O'Neil and Riddle. Dijak grabs the mic and tells O'Neil to fuck off because he was born and raised in Worcester and New England wrestling is the best. He then says to bring out their opponents so he can beat the shit out of the entire state of Ohio.

Match 3: The American Destroyers: Donovan Dijak and Mikey Webb and Alpha Sigma Sigma: Big Daddy Beluga and Anthony Greene defeated OI4K: Jake and Dave Crist and Scarlet & Graves: Dezmond Xavier and Zachary Wentz w/JT Davidson
This was a sick match. Tons of insane spots. This match is a must see. By the end of the match, Dijak did just what he said he would. He wrecked all 4 members of the opposing team.
9.25/10

Match 4: JT Dunn defeated Dave Cole in a No DQ match by referee stoppage
JT wrecked Cole for most of the match, busting him open the the paint brushes Cole tried using the night before. JT won when Cole couldn't continue anymore and the ref stopped it.
6/10

Match 5: Jonathan Gresham defeated Jay Freddie
Great technical match. Jay Freddie needs to wrestle more in New England because he is really good. These two beat the hell out of each other. Gresham worked Freddie's leg for a good portion of the match and got the win with a leg submission.
8/10

Match 6: Veda Scott w/Ryan Galeone defeated Karen Q
This match was kinda average. Karen Q is talent and I hope I see her on more shows. This match seemed to be a short for some reason. After the match Veda attacked Karen until Warbeard Hanson came out and chased her and Galeone off.
4/10

Match 7: Warbeard Hanson defeated Rex Lawless
Solid big man match. I find Rex Lawless to be very boring but he did well in this match. Hanson got the win with the spin kick of doom.
7/10

Match 8: LuFisto and Jordynne Grace defeated The Secret City Soldiers: Taeler Hendrix and Alexxis w/Davey Cash, Kris Pyro and Anthony Stone
This was basically another squash for Grace and LuFisto. They annihilated Alexxis. During the match LuFisto got into it with Da Hoodz.
4/10

Match 9: David Starr defeated Joey Janela w/Penelope Ford in an Anything Goes Match
This was the most violent match I have ever seen live. Starr's head was busted open on a chair and Janela poured salt on the wound. Then throughout the match he kept slapping the open wound. Janela took a sick powerbomb through a really small table, he was thrown like a spear into the brick wall of the venue and he even took a german suplex on cinder blocks. This needs to be seen by anyone who enjoys extremely violent wrestling. - I do enjoy extremely violent wrestling and can't wait to watch this match! - Mike
10/10

Match 10: Jon Silver defeated Chris Dickinson
Very hard hitting physical match. These two beat the ever loving shit out of each other. Silver got the win with a sitout powerbomb.
8/10

In Ring: Dijak comes out after the Riddle's win to confront him. Riddle the challenges him to a match at Beyond Wrestling's Wrestlemania weekend show in Orlando. Dijak accepts.

Match 13: The American Wolves: Davey Richards and Eddie Edwards defeated EYFBO: Angel Ortiz and Mike Draztik
Awesome match. Great back and forth action. EYFBO proved that they can hang with the best tag teams in wrestling. This match needs to be seen. The Wolves got the win with a superkick/brainbuster combo. Great match to end the weekend.
9/10

In Ring: Da Hit Squad comes out to confront EYFBO but to masked men come into the ring and Da Hit Squad leaves. They reveal themselves to be Milk Chocolate (Brandon Watts and Randy Summers)