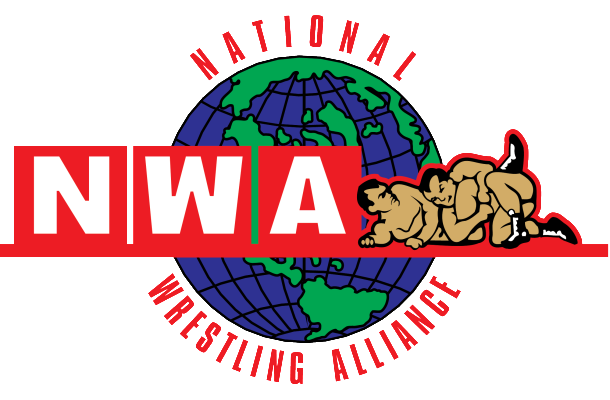 At the beginning of 1998 the WWE had been losing the Monday Night Wars to WCW and the nWo when they decided to stage their own invasion, however this invasion would be that of a previously established  wrestling identity that formed back in 1948, the NWA: National Wrestling Alliance.

If done correctly this would be a great move for the WWE but an even better move for the NWA who had not managed to reclaim their national prominence ever since WCW’s withdrawal on September 1, 1993.

It taken a year for the NWA to regroup and rebuild and in that time all of their major championships were vacant, except for regional championships, causing the titles to lose their integrity.  The NWA that emerged in 1994 was essentially a new organization that only shared the name of a once great empire of wrestling.

The new NWA started off badly when Shane Douglas famously threw down the NWA World Championship and raised the banner of Extreme Championship Wrestling.  The NWA quietly crowned a new champion in Chris Candido a few months later who a few months after that dropped the title to Dan Severn.  For NWA President Howard Brodie and Vice President Dennis Carraluzzo the deal with WWE had the potential to bring NWA back to the forefront.

Jim Cornette hadn’t been a manager in the WWE for about a year when he was chosen to lead the charge waving the NWA banner into the WWE.  He had been doing commentary for Shotgun Saturday Night and cutting apparent shoot promos on his views in wrestling on RAW.  On December 30, 1997 in New Haven, CT Jim Cornette along with Brodie and Carraluzzo announced the invasion of the NWA on a Monday Night Raw that was taped to air on January 5, 1998.  It was announced that right now Jeff Jarrett would be battling Barry Windham for the vacant NWA North American Championship.   Reckless Youth had been the North American Champion since June 14, 1997 but he was stripped of the championship for this angle. 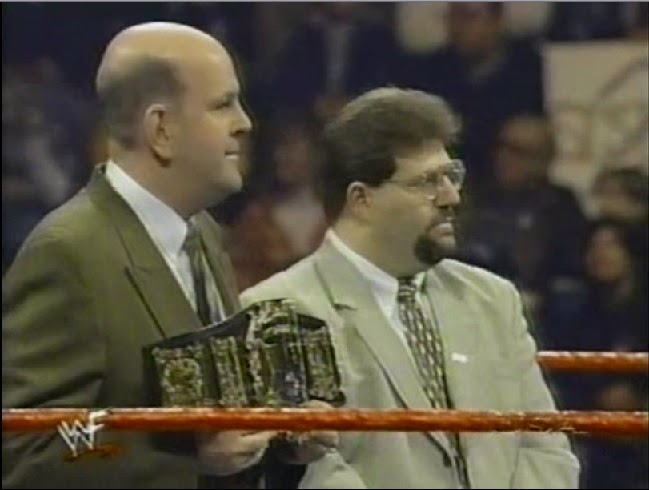 With the assistance of Jim Cornette and his tennis racquet Jeff Jarrett pinned Barry Windham in less than 4 minutes to win the title.  Immediately after winning “Stone Cold” Steve Austin, the most popular WWE Superstar at that time, hit the ring to deliver a Stone Cold Stunner on Jarrett and then mock his strut.  This move essentially killed the NWA angle before it even started.  I can’t understand why the WWE would make the NWA look so weak instantly but having the apparent face of the NWA be fed to Austin. 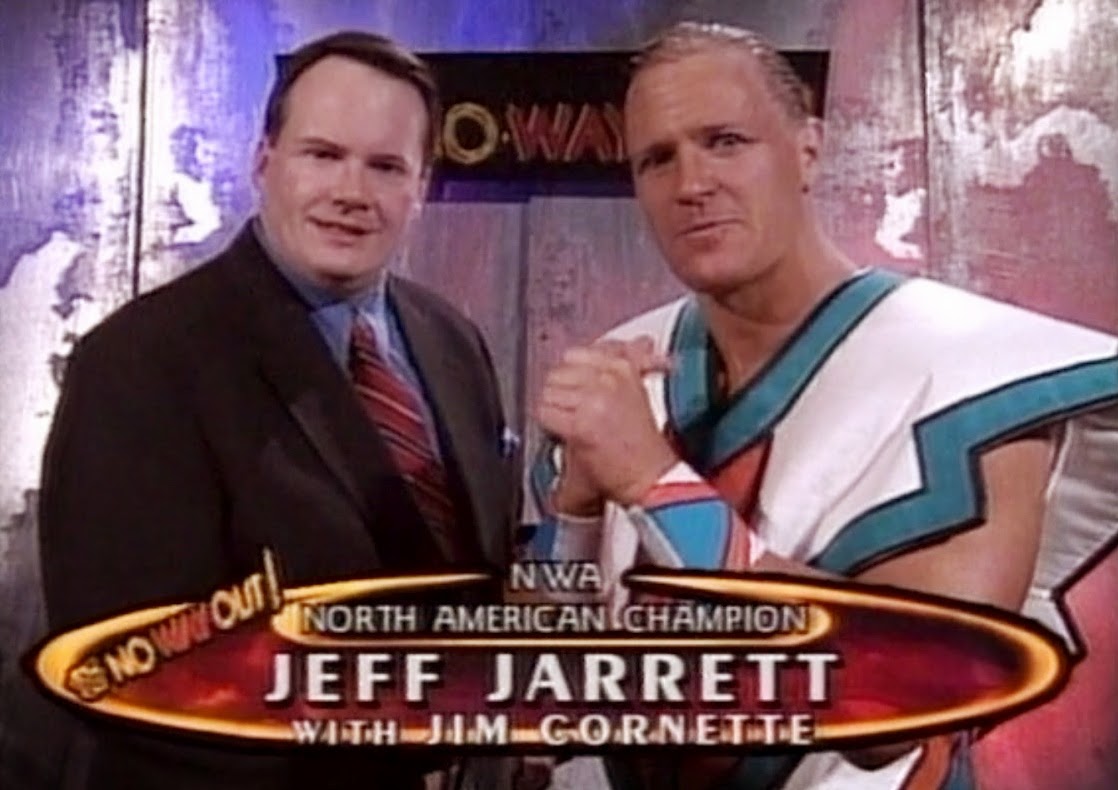 The January 12th edition of Raw in State College the NWA stable grew when perennial fan favorites The Rock n’ Roll Express debuted as the NWA World Tag Team Champions as heels with Jim Cornette as there manager.  Cornette had been battling against the Rock n’ Roll Express ever since they debuted as a tag team back in 1983, it made no sense to me seeing them aligned with him.  The tag titles had been held by CW & Pat Anderson since September 14, 1996 but they were stripped of the titles for the angle and the Rock n’ Rolls were simply awarded the championship. 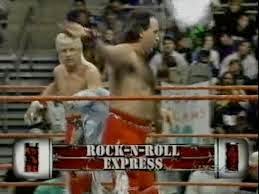 Now I know what you are thinking, the Rock n’ Rolls were brought in with a big push to make up for the debut of the angle and it’s immediate burial by Austin.  Nope, they were paired with mid-card tag team Skull & 8-Ball and lost, granted by disqualifications, in 2 ½ minutes after Cornette interfered.  You can tell that the WWE really got behind this angle.

On January 19th in Fresno, CA on Raw is War Barry Windham turned on his BlackJack partner Bradshaw to help Jeff Jarrett retain his title and he joined the NWA stable.   That same night for a taping of Shotgun Saturday Night to air on January 24th the Legion of Doom defeated the NWA Tag Team Champions: The Rock n’ Roll Express by dq when Windham interfered.

The next night in Davis, CA for a Shotgun Saturday Night taping to air January 31st Chainz defeated the NWA North American Champion: Jeff Jarrett by dq when rest of the NWA stable interfered.

Essentially we are 1 month into the angle and the NWA Stable has been regulated to losing matches, granted by disqualification, on the secondary shows to mid-carders.  This is not the way to get the NWA over as a viable threat to the WWE.  The NWA Stable needed clean finishes to the mid-card and dq loses or victories over the headliners.

The month of February didn’t get much better Jeff Jarrett lost to Bradshaw via DQ at the No Way Out PPV on February 15th in Houston, TX.  On February 17rd in Waco, TX the Headbangers defeated the Rock n’ Roll Express to win the NWA World Tag Team Championships.  Nothing against the Headbangers, I’ve met them and they are wicked nice guys and to this day they can still go in the ring.  But at that time they were probably the lowest tiered tag team in the WWE.  This match was taped for Raw that aired on February 23rd. 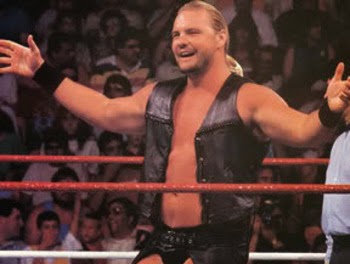 The coolest part of this entire angle was the fact that the WWE brought in the greatest referee in the history of wrestling, Tommy Young, to act as the NWA referee.  He even had the NWA Logo on his striped referee shirt.  Tommy had severely injured his back in 1989 and basically hadn’t been seen since then, seeing him on TV made me pop each and every time.  They even ran an angle where being thrown over the top rope was cause for a disqualification under NWA rules.  That is how the Rock n’ Roll Express defeated the Headbangers on a special Raw Saturday Night on February 21st, taped on the 16th in Dallas, TX. 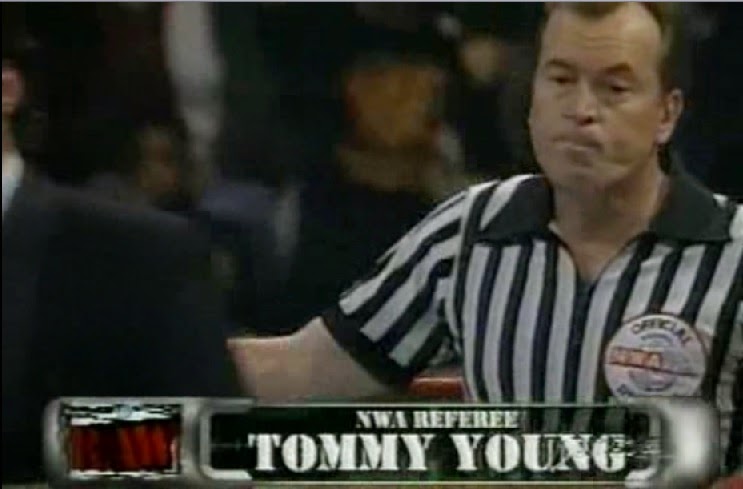 On March 16th in Phoenix, AZ for a RAW taping to air on the 17th the Rock N’ Roll Express failed to capture the NWA Tag Titles from Headbangers and were attacked and kicked out of the NWA Stable by “Bombastic” Bob & “Bodacious” Bart the New Midnight Express.

I attended NWA Legends Fanfest 2009 in Charlotte, NC and on the first night they had a Q &A with Jim Cornette where I asked him “In the annuals of history of the Midnight Express, where do Bart Gunn & Bob Holly fit in?”  To which he laughed loudly and then told us the story of how they came to be.  Essentially what he said was the Vince McMahon was annoyed that when he and Cornette traveled together everyone would always ask him about the Midnight Express and not Cornette's work in the WWE.  So he called Cornette one day and said let's bring the Midnight Express back!

It appeared that on March 30, 1998 on Raw from Albany, NY would be the day that the NWA would have new life breathed into them.  On this night the New Midnight Express captured the NWA World Tag Team Championships from the Headbangers and finally the NWA World Champion appeared!  Dan “The Beast” Severn sauntered to the ring in a suit with his NWA World and UFC Superfight and Ultimate Ultimate Championships and he proceeds to stretch the Headbangers.  The WWE announced team puts Severn over as the true bad ass that he is. 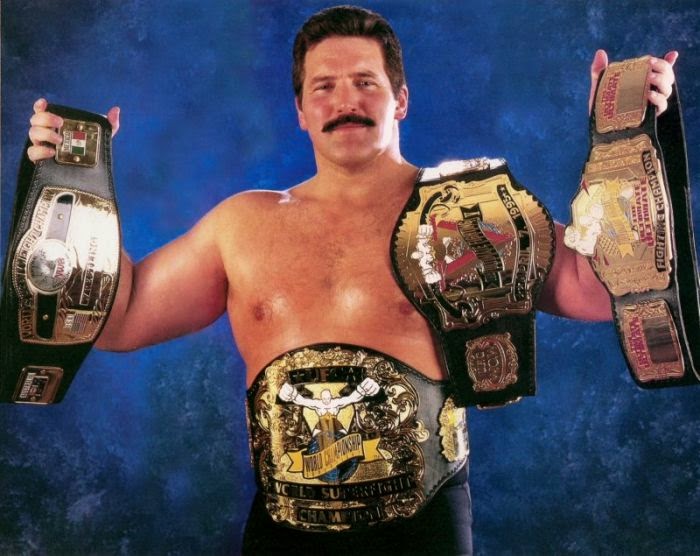 I do wonder though, why it took nearly 3 months for Severn to be brought into the fold.  You would think that as NWA World Champion he would have been one of the first to come in and he would have carried the banner of the company that he had been their champion of for the last 3 years.

Dan Severn’s impact was minimal.  He wrestled sparingly in the WWE but would have matches with Owen Hart, Flash Funk, and the Headbangers, but the NWA Championship was never on the line.  By the time he made his WWE PPV debut at the King of the Ring in June he was no longer being recognized at the NWA World Champion nor would he bring the belt to the ring during his matches.  He would stay in the WWE until February 21, 1999 when he had his final match in Springfield, MA at a house show teaming with the WWE Tag Team Champions Owen Hart & Jeff Jarrett defeating the Godfather, Val Venis, & Steve Blackman.   Severn would lose the NWA World Championship on March 14, 1999 in Yokohama, Japan to Naoya Ogawa after 4 lackluster years as champion.

Barry Windham would leave the WWE in May his last match a losing effort against Bradshaw on May 16th in Anaheim, CA at a house show. 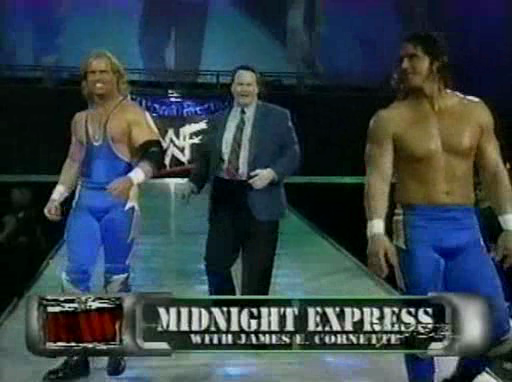 The New Midnight Express would go onto the feud with the Rock n’ Roll Express and the Headbangers losing several non-titles matches to the Bangers at house shows.  The Midnights would defeated the Rock n’ Rolls at Unforgiven in Greensboro, NC on April 26th.  They would lose to the WWE Tag Team Champions The New Age Outlaws at the King of the Ring on June 28th in Pittsburgh, PA.   On July 13th at the Meadowlands Bart battled Bob in the opening round of the Brawl for All and won via judge’s decision.  Jim Cornette announced on commentary that the Midnight Express have broken up and this essentially ended the NWA Invasion Angle.  Bart and Bob would defend the NWA World Tag Team Championship in losing efforts at a few house shows to finish out July.  They would lose the belts to The Border Patrol on August 14th in Greenville, NC.

The NWA Invasion did nothing to help the WWE with their war with the WCW and the nWo.  If anything the invasion hurt the NWA as it was made to seem as nothing more than a second tier promotion.  Except for the occasional match they were primarily in programs with mid-card talent and usually lost by dq on tv and clean at house shows.  It almost seems as though the WWE’s true reason for bringing the NWA on board was to bury them.