It was a good day today because I got to go to wrestling!!! 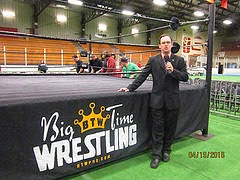 The pre-show was from 1pm - 3pm with a 3pm bell time.  Paul came over and we headed there meeting Mikey & Roy.  We didn't get there until 2pm-ish and we bought the $15 general admission tickets and sat in the bleachers behind the glass.  The Sukee Arena features an indoor hockey arena, I thought they would have taken the glass down before the show.  Oh well.

I didn't get any autographs or photos with at the show, it was more money than I was interested in spending. I did like that there were a couple vendors there with some decent wrestling items.  DVD's, t-shirts, and more.

To the matches, all photos are courtesy of Philster, I haven't gotten my camera fix yet and from where I was my phone couldn't get the best photos.  Thanks Phil!  Here's a link to the rest of his album of the event: Phil's Photos 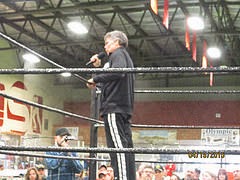 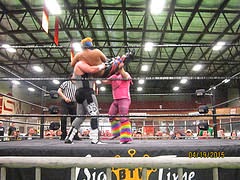 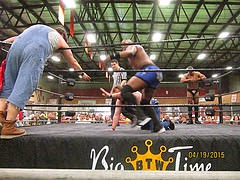 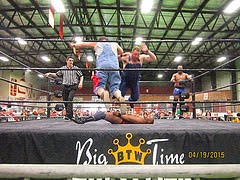 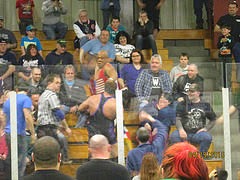 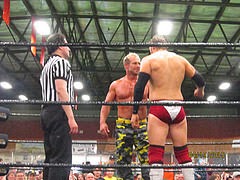 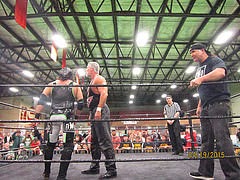 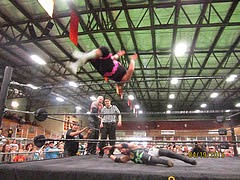 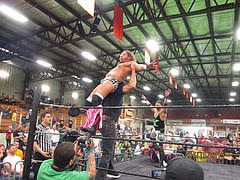 It was a good show.  Matches started about 15 minutes late because of the people that had purchased too sweet packages. Group photos with Hall, Nash, & Pac were $65 for just the photo or $100 for the group shot and an autograph from each.  Five matches in all with no intermission, show in total was about 95 minutes.

Opening triple threat was a good match, Todo Loco has gotten better since the first time I saw him. Roy swears that in NECW Loco is really good.

It was nice seeing Sonny back as a Hillbilly.

The falls count anywhere was fun as they went around the floor, through the bleachers and back down into the ring, Tony looks good and can still go for his age.  I was surprised Mr. TA didn't get busted open this time.  He usually does and it's nice to see color once in a while in wrestling these days.

Scott Taylor looked in great shape, however the match was meh.  Too much clowning around, I know the kids liked it, but it's not my style.  After the match Taylor brought some kid in the ring who obviously had some special needs issue but it got out of control with the kid trying to do the worm onto Haven and even jumping off the second rope onto Haven.

It was good to see Hall, Nash, & Pac together in the ring.  Match was good with Pac taking all the heat then making the hot tag.  Demanto went for a moonsault and missed, but it was impressive to see him come off the top rope like that.

After the match Damian Darling was standing on the second rope yelling at the fans when Hall went over to hit the Razor's edge, it was cool to think he was going to do it and it really popped the crowd.  The initial set up looked good, but then it got awkward.  Either Darling was squirming or Hall couldn't hold him, or a combination but Darling got dumped on the back of his head and it look bad.  Hall even talked to him from the floor while Darling sold on the mat.

It was a great afternoon of wrestling, the Sukee arena proved to be a great place to hold a wrestling show.

Later Readers!
Posted by Michael J. Labbe at 2:40 AM