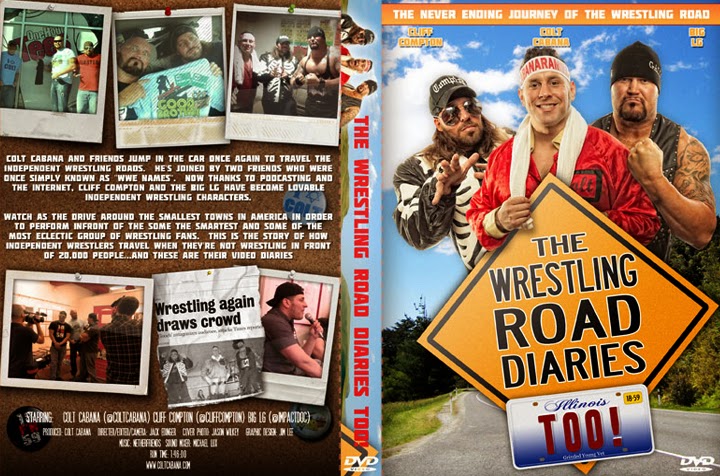 It’s not a mystery that Colt Cabana is one of my favorite wrestlers between is in ring ability and how entertaining he is with his podcast and you tube series it’s hard not being a fan.  In 2011 he released “Wrestling Road Diaries” and I reviewed the documentary back in 2011 and have included that review below.  In 2014 he released “Wrestling Road Diaries Too” and I figured it’s about time I put up my review for that one too.

This time around we have former WWE Superstars; Cliff Compton a former WWE Tag Team Champion as Domino of Deuce & Domino fame and Luke Gallow aka The Big LG aka Festus aka Doc Gallows aka Sex Ferguson, the aka’s could go one forever.

These two documentaries couldn’t be more different in style, look, and content, but they are both amazing and are must haves!  I paid the extra $5 for both editions to get the Bonus disc with deleted scenes and in the case of “Too” a video of the live Art of Wrestling podcast they recorded at the end of the journey.

At the beginning Gallows is picked up at the airport making a grand entrance being pushed in a wheelchair wearing purple tights with a star on the crotch and his satin Ribera Steakhouse Jacket.  He had just recently torn his groin muscle but didn’t want to miss his bookings.

The trio travel from town to town showing us how life on the road can be exciting and yet monotonous as at times there is a lot of just waiting for the show to start.  They talk candidly about their experiences and disappointments when working for the WWE.  Colt opens up about it a lot more than the first Road Diaries which he filmed just after his release.   They discuss what it takes to make a living in wrestling not being in WWE.

We also get to see a side that one normally doesn’t when Gallows is forced to seek medical attention as his injury keeps getting worse.  It’s one of the nastiest bruises I have ever seen.

The comradery between the three is amazing as is what they do to entertain themselves.

I really don’t want to give away too much because I think you just need to buy it and watch it for yourself and just trust me that it’s wicked awesome and you won’t regret your purchase.  I’ve linked the trailers below a well as to Colt’s merchandise page where you can order them both with the bonus discs for only $40, saving $10.

I look forward to his next installment and hope it doesn’t take as long for him to do this time.  It would be cool it Wrestling Road Diaries 3 showed us Colt on an international tour in Japan or Europe. 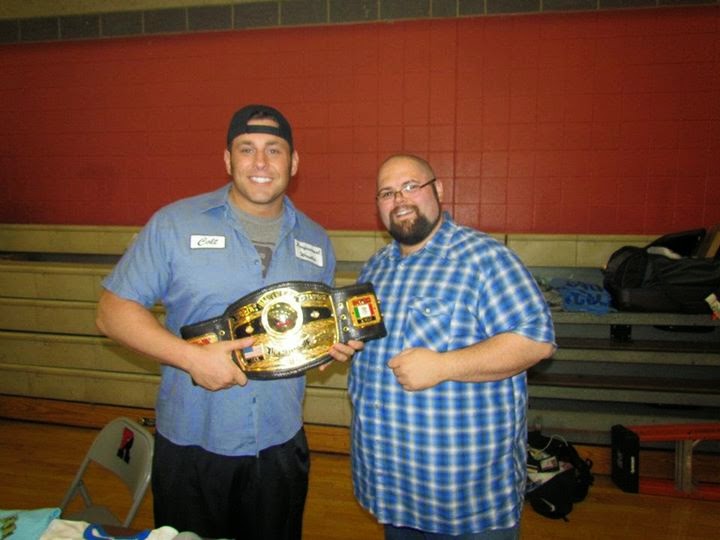 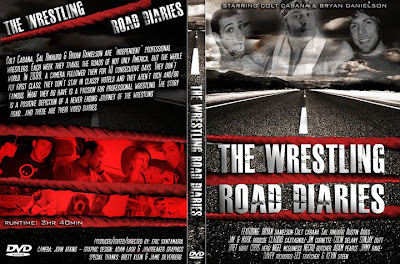 Also Featuring a 100 or so Independent Wrestlers, some you will know others you won't.

I pre-ordered Wrestling Road Diaries based on the trailer and teaser I saw on you tube and because I am a fan of Colt Cabana & Daniel Bryan/Bryan Danielson.  There have been so many documentaries on wrestling of the last couple of years that have never been released on DVD ( Hard Knocks, Bloodstained Memoirs, Card Subject to Change and more) and I’m glad to see this one made it.

I ordered the DVD plus paid the $5 extra to get the bonus disc with over and hour of additional footage.  I received my movie on Thursday March 24th in a plain unmarked envelope like I was ordering porn or something.  The DVD insert was signed by Cabana & Danielson.  The image above is the paper insert and the disc itself is screen printed.  The bonus disc is a plain disc with no writing or markings of any kind.  It came in a white sleeve with “bonus” written on the sleeve and it is just placed in the case.  Clearly that $5 is 95% profit.

I watched the feature that evening and that is what this review is on.  I will do a write up on the bonus disc once I watch it.

The primary focus of the feature is a 10 day tour the trio embarked on in September 2009 after Danielson was offered a contract with the WWE.  It also highlights the final Ring of Honor shows that Danielson worked September 25th & 26th in Boston & New York.

This documentary, over anything I have ever seen or heard of, truly shows that heart and dedication one must have to make it as an independent wrestler.  Starting from a HD Net television taping at a packed The Arena in Philadelphia to barley attended event in Connecticut they show the trials and tribulations of independent wrestling.

The friendship between the three is evident based on the thousands of miles driven and the accommodations stayed at.  The candid comments and behind the scenes footage gives insight to independent shows of every level and how they each approach and feel about their style of professional wrestling.  You also see a personal side that you would only see if you knew them and spent time with them.

The only negative item of note is that at times the audio is difficult to make out.  It appears as though the only microphone used during filming is the one attached to the camera.  So if they were to far away or looking away from the camera the dialogue is faint, however this is less than 3% for the film.

This is a must buy for any wrestling fan not just fans of Cabana and Danielson or fans of only WWE or TNA, but for all fans of professional wrestling.

So use one of the links below and buy a copy, you won’t regret it.  Not to mention Colt could use the money to fix the giant crack in his windshield.