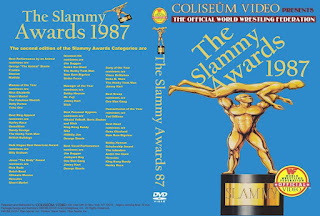 This is on the WWE Network so I popped it on to check it out and got sucked in so I thought, let's blog all about it.

Billed as the 37th Annual Slammy Awards, Howard Finkle did the voice over announcing everyone showing clips from their red carpet arrivals with the theme from Saturday Night’s Main Event playing.

The show opened with Vince McMahon giving a motivational speech before bringing out Jesse Ventura and Mean Gene for the first award of the evening.

Honky Tonk Man came out to sing his theme song, which he did sing, however he was not playing the guitar that he was holding, he was strumming, but his hand never moved on the neck.  Jesse Ventura was “playing” the Piano, and they had a group of ladies singing back up.
At one point the Hart Foundation came out in their wrestling gear, they did this little move where Bret whipped Neidhart across the stage sliding on his back and then Bret ran jumping over him where they both bounced up and down in the catcher’s stance.  What’s most surprising is the only guy on the stage with real musical ability was Jimmy Hart who sat on the back of the Cadillac clapping his hands swaying back and forth the entire time.

Jimmy Hart & The Honky Tonk Man presented the award for Woman of the Year
Nominees: Sensational Sherri, fake Dolly Parton, Fabulous Moolah, fake Yoko Ono, and Miss Elizabeth
Winner: Miss Elizabeth who thanks the Macho Man for making her the woman she is today.

This shows does have an audience most likely made up of wrestlers and WWE employees, it’s great that all the wrestlers are in their gear too, however they clearly have canned audience noise to go with the actual live audience reaction.  It’s the same whistling noise that keeps repeating that set it off.

Commercial for the Piledriver Wrestling Album

“Hacksaw” Jim Duggan to present for best ring apparel
Nominees: Demolition complete with mock shirts and bow ties to go along with the standard Demolition gear, “Macho Man” Randy Savage, Honky Tonk Man, “King” Harley Race, & British Bulldogs
Winner: “King” Harley Race – Duggan refused to read his name as the winner the girl handing out the statue did.  Race refused to accept the trophy unless Duggan got down on one knee to present it to him.  Duggan and then Race brawled to the back fighting at what appears to be the make-up area, Gorilla Monsoon called the action.  There’s a guy with a Donkey standing there watching.  Monsoon mentions that Beefcake is on stage awarding the Slammy for “Best Head”, there was a tie between Bam Bam Bigelow and Mean Gene.  Harley goes for a head butt on a prone Duggan who moves sending Harley to crash down through a table. 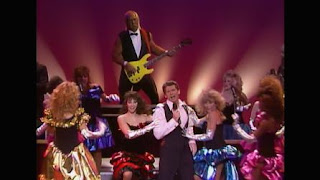 Vince was actually singing and dancing with some ladies while in the back ground Hulk Hogan was dead center and he looked to be really playing the base guitar.  To Hogan’s left George “The Animal Steel was playing the tambourine while the trio of the Killer Bees: “Jumping” Jim Brunzell and B Brian Blair with the Junk Yard Dog “played” the saxophone.  To Hogan’s right the trio of “Macho Man” Randy Savage, Jake “The Snake” Roberts and Brutus Beefcake “played” the trumpet.  Say what you will, you have to McMahon tones of credit for coming out and doing this.

Cut back to Duggan and Race brawling in the electrical room.  Gorilla Monsoon is now there with Heenan watching it, a llama just walked by.  Finally Race escapes the electrical area and Heenan locks in it.  Apparently one side of the electrical room area was a giant wall of boxes and Duggan pushes over onto the Race and Heenan and he escapes his confines.  The two brawl into the girls changing room and we see some of the dancers in their underwear.

Hulk Hogan is introduced by Mean Gene to present the Hulk Hogan Real American Award
After a lengthy speech Hogan announces the honoree: “Superstar” Billy Graham
After a short speech, Hogan took and broke Grahams cane then the two had a pose down on the stage, Billy wore is jacket. 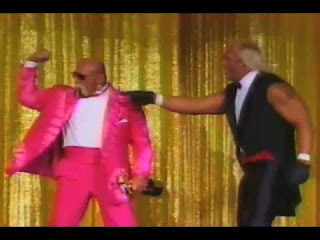 Back to Race and Duggan fighting in the back, they are now in the room that was to be the Christmas party for the families, food everywhere, Heenan was body slammed through a table.  Gorilla Monsoon cancels the cast Christmas Party.

Jesse Ventura is out to present the Jesse The Body Award
Nominees: “Ravishing” Rick Rude, “Natural” Butch Reed, Ultimate Warrior, Sensational Sherri, & Hercules
Winner: “Ravishing” Rick Rude who did a strip tease walking up to the stage.  Rick Rude thanked his role model Jesse the Body for creating this award for him to win, he also thanked all the woman of the world whose days begin and end with sweet thoughts of Rick Rude.  He then left the stage with the trophy girl and it was implied they had sex just off camera.

Mean Gene and Jesse Ventura presented a musical tribute package to the Greatest Hits of 1987.  I’m assuming the original music was replaced with some weird generic music because of rights issues while a montage of matches from the year played.

Mene Gene and Jesse Ventura were going to present the award for the Greatest Hit of 1987 when Race and Duggan burst on stage through the video screen.  They were finally separated and the show continued.
Nominees: Andre The Giant, “Hacksaw” Jim Duggan, The Honky Tonk Man, Bam Bam Bigelow, & Strike Force: Tito Santana & Rick Martel
Winner: “Hacksaw” Jim Duggan who came out and accepted his award with one word, Hoooo!

Gorilla Monsoon to present Manager of the Year
Nominees: Bobby Heenan, Mr. Fuji, Jimmy Hart, “The Doctor of Style” Slick.  All the nominees came up on stage as they were introduced.
Winner: None of the Above

Koko B. Ware and company performed his song Pile Driver on a mock construction site.  Bam Bam Bigelow “played” the baritone saxophone, Koko was actually singing.  The dancing girls where there with a great dance routine and provided back up harmony.  The Ultimate Warrior stood around with a large sledge hammer.  For some reason, during the Sax solo the cut to footage of Ware on a date with a young lady and he presenter her with a single rose that she just went head over heels for.  This was terrible.

Jimmy “The Mouth of the South” Hart performed the theme for Strike Force, Girls in Cars.  The dancers were in bathing suits with cut out cards on them wearing roller skates.  Some of them, and one on a tryke.  Jimmy did a great job.  Strike Force came out on motorcycles and stole the girls from Jimmy. 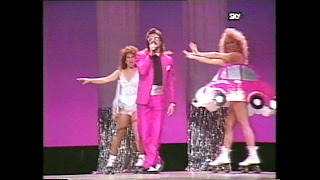 Jesse Ventura and Mean Gene introduce the final song: If You Only Knew by the WWE All Stars.

All the wrestlers were on stage like a choir clapping and swaying back and forth, except Virgil who stood still with his arms crossed.  Everyone lip synched…clearly.

Jesse Ventura & Mean Gene presented the Slammy for Song of the Year
The Nominees: Vince McMahon, Koko B. Ware, Jimmy Hart, The Honky Tonk Man, If You Only Knew
Winner: The heels stole the envelope and opened it, the passed it around and all acted negatively as they looked at the listed winner until Sika ate the card.  I guess you could say this was a no contest. 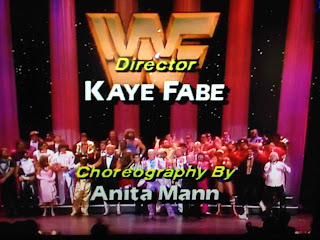