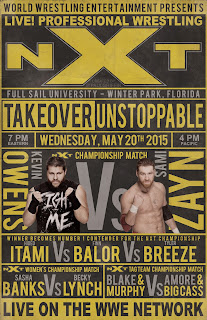 It's time once again for an NXT Takeover special!  These remind me of Clash of the Champions and they have always been solid shows top to bottom.  I realize that NXT is white hot right now I just hope that WWE doesn't ruin it by trying to bring it to RAW and instead leave it the way it is.  I realize that some guys will need to get called up to the main roster and new talent built, but I can see them messing this up.

Finn Balor vs. Tyler Breeze
for the #1 Contendership to the NXT Championship
Tyler has a special entrance, not to write about.  Balor has his special interest, it's simply awesome.  His paint and costume and different this time.
Great match between these two, was supposed to be a triple threat but Itami is injured.  Balor picks up the win.
Charlotte & Bayley vs. Dana & Emma
Two ladies matches on the card tonight, that should tell you just how good these ladies are.  Good match, some great teamwork with Bayley and Charlotte.  You can see that Dana is still very green but she did a great job.  Charlotte and Bayley pick up the win and hug it out at the end.


Baron Corbin vs. Rhyno
The veteran Rhyno was up next to take on Baron Corbin in a hard hitting match.  Corbin has only been wrestling a couple years and this is the longest match of his that I have seen.  He looked good and was able to power Rhyno into his End of Days finisher which was impressive and enough for him to take the victory.

NXT Tag Team Champions: Blake & Murphy vs. Enzo Amore & Colin Cassady with Carmella
Great tag team match between these two teams saw a few spots that were messed up.  Crowd is really into Enzo and Big Cas.  I liked the look of Blake and Murphy when they first came on, but now with how they act I’m becoming less and less of a fan.  Blake and Murphy squeak out a victory to retain.

NXT Women’s Champion: Sasha Bank vs. Becky Lynch
Great match, just a great match.  Some great mat wrestling with both woman working the arm for their respective finishers.  They mixed in some high spots and the crowd was completely behind them as they told their story in the ring.  It really put the shame what is being pushed right now on Raw.  After a very hard fought victory Sasha Banks retained with a submission.  Lynch was given a standing ovation by the crowd.

NXT Champion: Kevin Owens vs. Sami Zayn
Good Lord this match was fantastic!  Zayn dominated and when Owens tried to get on the offense he was shut down immediately.  Suddenly on the floor Owens hit Zayn with a pop-up powerbomb with decimated Zayn and essentially ended the match.  Owens then beat on Zayn while officials and the medical crew tried to tend to Zayn.  Suddenly Samoa Joe came out, to a huge ovation, and after a tense stare down Owens backed off.  Officially a no contest. 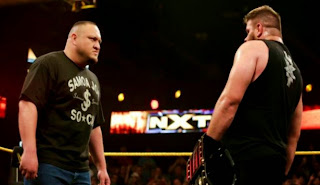 Great special, once again NXT has proven to the be a fantastic product that is well worth the $9.99 a month that the Network costs.  Joe is apparently keeping his name as he was a wearing an official NXT t-shirt that said Samoa Joe on it and that’s what the announcers called him.

I have a couple concerns for NXT as a whole.  First of all every show is at full sail university so you essentially have the same crowd that has claimed ownership of the product and have made themselves part of the show which enhances the show as the crowd is loud and raucous!  My fear is that like TNA outside of this controlled environment on tours the product may suffer.  My second fear is the Triple H has control of NXT while Vince McMahon still has control of WWE.  Because of this even is a talent who was hot in NXT comes up to RAW doesn’t mean they’ll get the push they deserve; for example the Ascension.  That being said, at Hell in the Cell, Kevin Owen cannot lose that by pin fall or submission.

If you’re not watching NXT then you are really missing out on a great wrestling show.