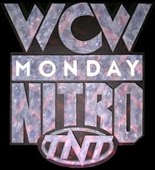 I had some time to kill before work so I just threw on a random episode of Nitro on WWE Network, and it turned out to be a really good one.

Chris Benoit w/ Brian Pillman vs. “Das Wunderkind” Alex Wright
A surprisingly great match between these two; Benoit with his normal intensity and Alex Wright with some odd weak looking European uppercuts.  Wright showed some good high flying offense but in the end a dragon suplex gave Benoit the win.  At one point Wright slingshot Benoit who ended up getting hung up on the top rope before falling to the floor.  The commentators discussed by it wasn’t a disqualification, apparently WCW was still using the “no throwing someone over the top rope to the floor” DQ rule.  I didn’t recall that still being in effect then.

Eddie Guerrero vs. Lord Steven Regal
Two great matches to start this show!  Regal dominated with his style of British mat wrestling while Eddie threw in some lucha style moves before being shut down by Regal.  A really good match that ended with Eddie getting the upset victory with a backslide.

Interview with Sting and Lex Lugar by “Mean” Gene

Sting vs. Diamond Dallas Page
At this point in his career Page hadn’t unleashed the Diamond Cutter and was still the struggling lower mid carder.  Sting had very little offense in the match and it went longer than I thought, but it ended as I expected with Sting locking in the Scorpion for the submission victory. 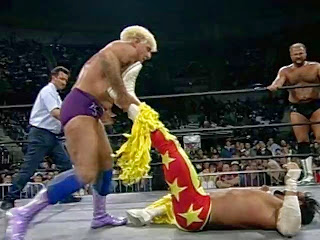 World Champion: “Nature Boy” Ric Flair & “Enforcer” Arn Anderson vs. Hulk Hogan & “Macho Man” Randy Savage
Quite the main event, but this is one of the reasons WCW failed giving away a match like this and it’s not on PPV.  Charleston crowd loved the Horsemen!  Savage comes out in red and yellow matching Hogan.
Some surprising offense by Hogan as he shows his wrestling ability working the Flair’s arm.  Hogan always applied the figure four quite oddly but it was effective.   Savage played the Ricky Morton roll taking a massive beating from Anderson and Flair who displayed some great quick tag, tag team wrestling.  Then Savage hit the hot tag, Hogan no sold everything, Hulked up from an Arn Anderson spine buster for the formulistic finish of the big boot and leg drop.  However, Dungeon of Doom ran in and The Giant took out both Hogan with a chokeslam.

A really good and enjoyable hour of wrestling!