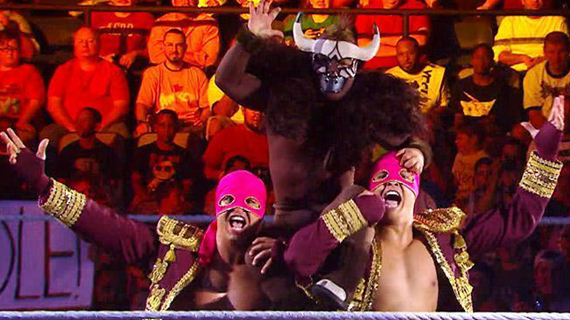 They open talking about the special and taking a look at what Lucha Libre is, my first thought was a video package from back in the WCW days that Mike Tenay did the voice over on that talked about Lucha Libre.  It was called Lucha Libre and the Mexican Luchadores.  I really liked this video package and even kept a recording of it on one of my many best of compilation tapes, until the flood destroyed it.  Much to my surprise and happiness this exact video package was played, and it’s just as good as I remember!  This package was made in 1997.  I just realized the WCW/AAA joint PPV When Worlds Collide is not on the WWE Network.

We then get a video package on Mil Mascaras, which was his Hall of Fame package, it seems like it was an extended one though.   Next was a match taped June 27, 1981 at the Capital Centre in Landover, Maryland featuring Vince McMahon on commentary where Mil Mascaras pinned Sgt. Slaughter with a cross body off the top rope. 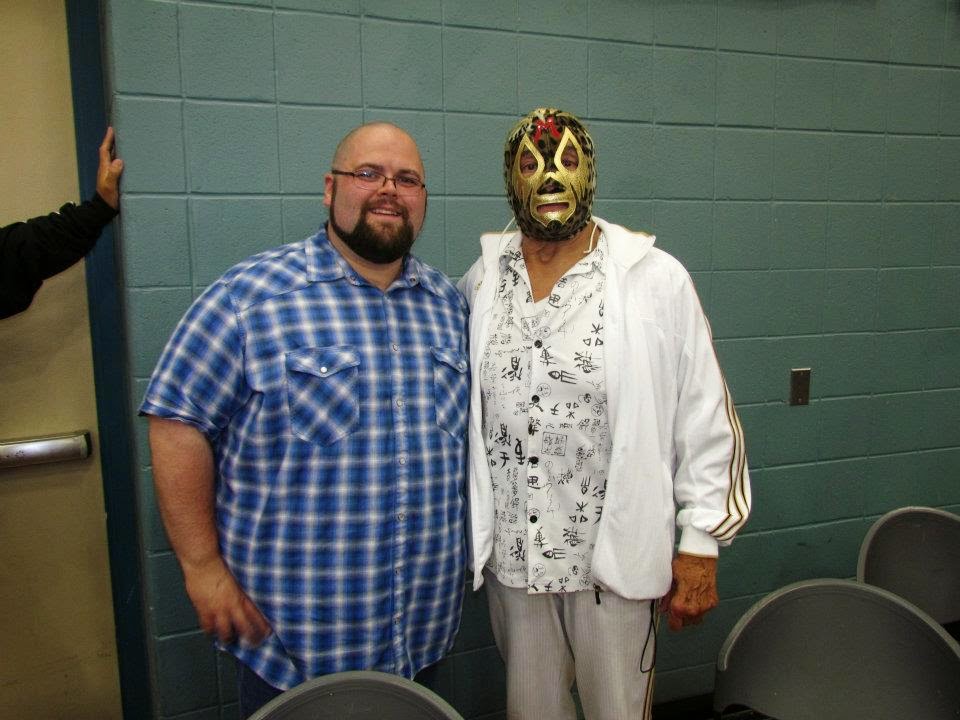 I actually met Mil Mascaras at a PWS show I Rahway, NJ on June 1, 2012 also where Mil defeated Samuray Del Dol now known as Kalisto in the WWE.  This was the show I went to, to meet the Great Muta.  I couldn’t pass up the opportunity to get my picture taken with the legendary Mascaras.  I don’t care how bad he is or was in the ring or egotistical he allegedly is, you can’t argue with what he accomplished in wrestling.  His match with Samuray wasn’t the greatest, he was 69 years old at the time, but was quite impressive considering, and much like a Muta, I never thought I would ever see him wrestle live. 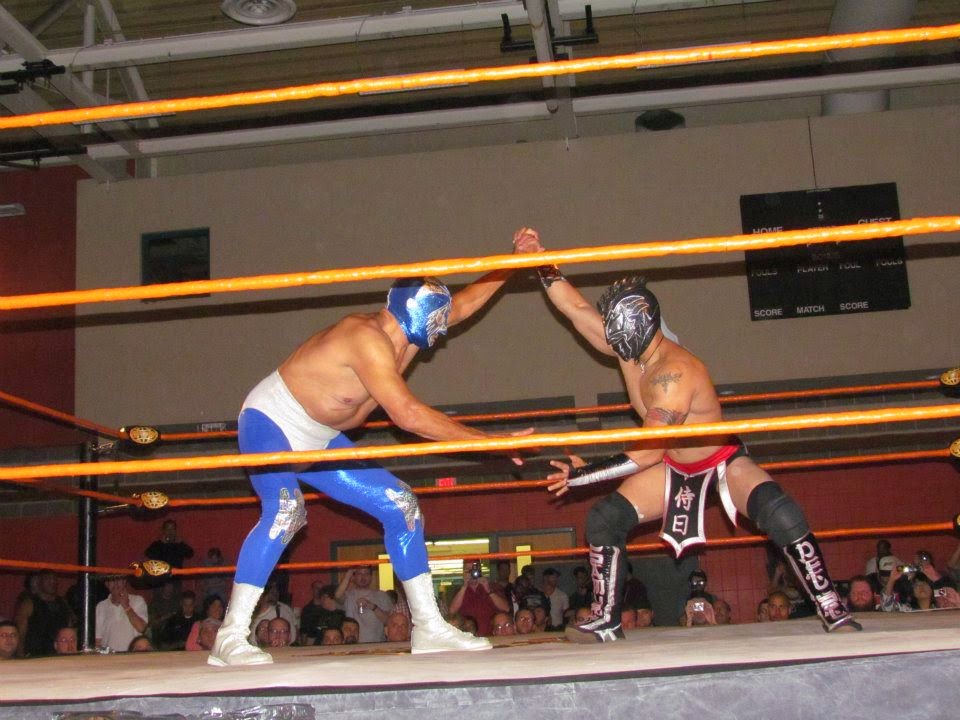 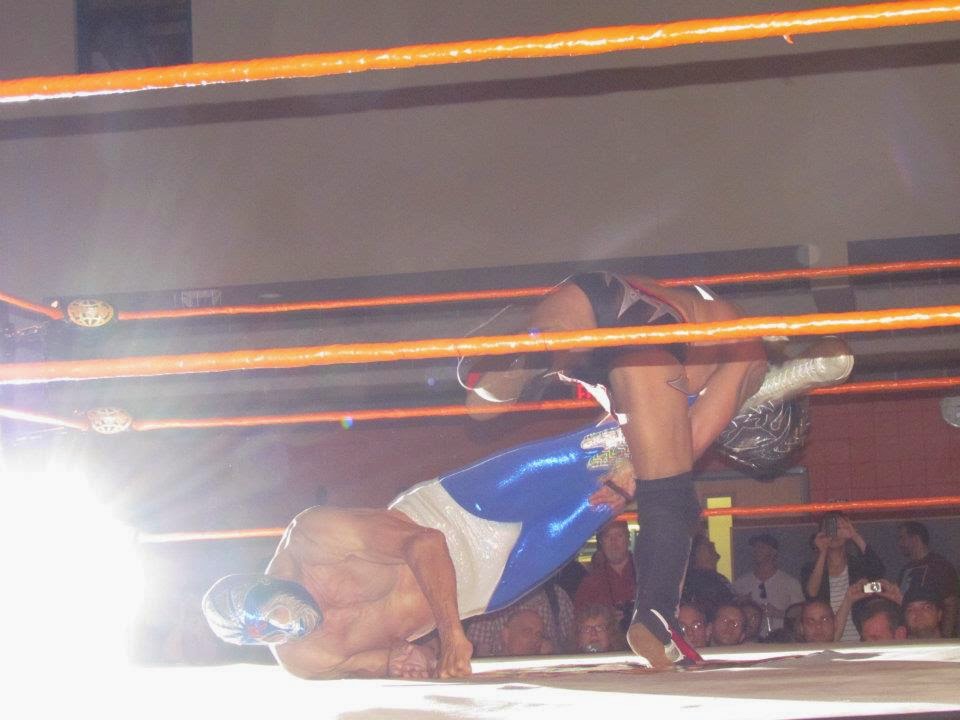 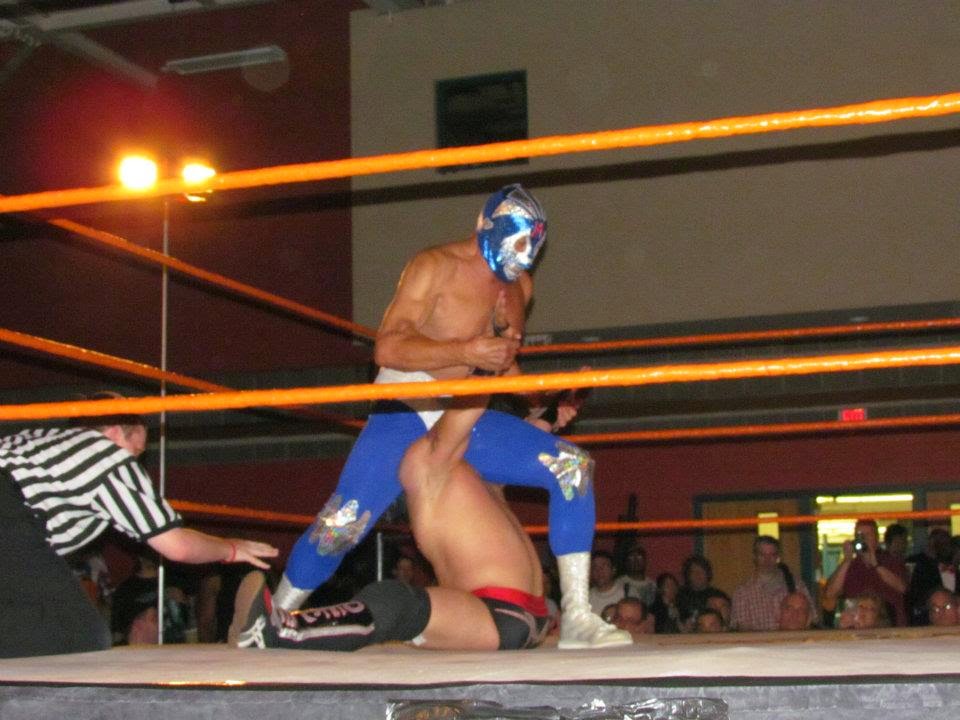 Los Matadores talk about Mil Mascaras influence they talked about how Chris Jericho was influenced by it.  A segment talking to Jericho and others about his time in Mexico is shown I would guess it’s from his new DVD.   It then jumped right to Paul Heyman talking about bringing Lucha Libre to the United States with ECW footage shown from the Rise and Fall of ECW.

Match two is from the ECW Arena on October 28, 1995 featuring Konnan & Rey Mysterio Jr. vs. Psicosos & La Parka.   Back when I liked Mysterio before he won the 2006 Royal Rumble which is the point when I stopped like anything he did.  This was also when I still like Konnan, I stopped liking him when he went all rasta and joined the NOW in July 1997.  Seriously!  A count-out finish in ECW!?  It was cool that Joel Gertner did the announcing in Spanish.

Next up is a very long package on Eddie Guerrero and the Guerrero family.  It’s a great package talking to the entire family, how they were raised and bringing their style to the United States with match clips from Mid-Atlantic Wrestling, World Class, AWA, WCW, ECW, and WWE.

Part two of Lucha Libre and the Mexican Luchadores WCW segment hosted by Mike Tenay this time talking about the history and significance of the Mask in Lucha Libre.

A segment on Lita from her DVD is shown about her time in Mexico and why she like Lucha Libre.  They show that wicked powerbomb that Eddie gave her on the floor not too long after her debut in WWE.

Part three of Lucha Libre and the Mexican Luchadores, talking about the upcoming Mask vs. Belt contest pitting Rey Mysterio vs. Eddie Guerrero.

Match three is from Halloween Havoc October 26, 1997 in Las Vegas.  Belt vs. Mask as Cruiserweight Champion Eddie Guerrero defending against Rey Mysterio Jr.  You might recognize this match as being one of the best wrestling matches ever.  There was just something that night between these two that was just perfect.  The referee in this match is Maine native Billy Silverman. 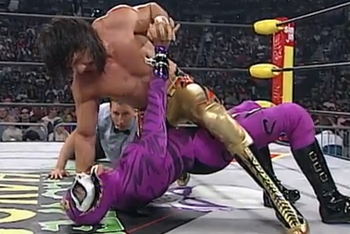 Part four Lucha Libre and the Mexican Luchadores talking about how there are so many families and second generation wrestlers in wrestling.

Match four from July 13, 1997 Bash at the Beach in Daytona Beach, a trios match with Juventud Guerrera, Hector Garza, and Lizmark Jr. vs. La Parka, Psychosis, and Villano IV.  This match was contested under Lucha Libre style rules, this was also when Mike Tenay would join the announce team only when the Luchadores were in the ring.

Part five of Lucha Libre and the Mexican Luchadores talking about the high flying daredevil style that is Lucha Libre.

Match five is from ECW on TNN an Extreme Three Way Dance pitting Yoshihiro Tajiri vs. Super Crazy vs. Little Guido Maritano, and yes it’s an elimination match.   I don’t recall seeing this match the first time around as I watched all the ECW on TNN episodes, but this is a great match just like their other encounters.

A video package featuring Hunico from 2012 where he shows us his collection of Lucha masks, who wore them and what means to him.  I learned something about Hunico that I didn’t know before which was he started wrestling in Mexico in 1999 and he was the first Mistico in Mexico and then later Luis Urive became Mistico, the one we are more familiar with.  Later Urive came to the WWE and became Sin Cara and Hunico became Sin Cara.  This was before Urive left WWE and Hunico became Sin Cara full time. 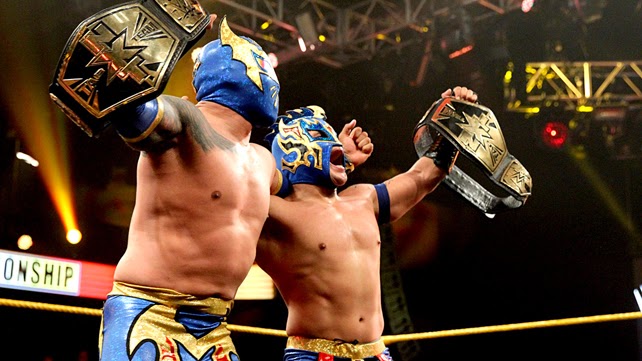 Match 6 is from NXT TakeOver: Fatal 4-Way on September 11, 2014 featuring The Lucha Dragons: Kalisto & Sin Cara defeated the Ascension: Konnor & Viktor to win the NXT Tag Team Championships.  This was the Ascensions first loss in a long time as they had held the titles for almost a year and were pushed as killers.  Then they got called up to the main roster and have fizzled tremendously.  That has to be so frustrating for them to go from where they were to where they are.

This was a really good special with some great matches and neat video packages.  I thought there would be a lot of current or recent WWE product but only 1 of the 6 matches were, and that was a damn good match.

This special is in the on demand section of the WWE Network under the category Playlists.  It is very much so well worth your time to check out.

Later Readers!
Posted by Michael J. Labbe at 8:53 AM