There was a time when I collected everything wrestling that there was to collect.  It was my Dad and his side of the family that really started down the line when my Dad got me a subscription to WWF Magazine in 1987.  He also got me my first ever wrestling figure, an LJN Hulk Hogan.  Eventually I got the ring and a large number of other figures.

My first ever album that I had was the Wrestling Album cassette that my dad got me for Christmas.  I had the Hulk Hogan Rock’ n’ Wrestling sheet set (I still use the only pillowcase I have left to this day on my bed), Hulk Hogan Pajama’s and even the Hulk Hogan work out set.  When I was 10 my Nana & Papa got me the Complete Book of Wrestling; an oversized hardcover book of full color photos with biographies of the top and lesser known wrestlers of the mid-late 80’s.

Once I got my license though, that’s when I started buying everything and anything wrestling that I could find.  Wrestling hadn’t yet hit its big boom of the late 90’s so you could find great stuff cheap at yard sales and flea markets.  That’s when my collection of LJN’s and Hasbro’s really took off.

My buddy Jay and I would be in competition both separately and together of finding that item that was better than the other person found, one upping each other.  For the longest time my Terry Funk LJN with hat and branding iron that I picked up for $6 at the Montsweag Flea Market in Woolwich was THE find.  Other big finds were the clamshell case Best of the WWF tapes.

We would buy figures, cups, magazines, commercial tapes, and this guy at the Lisbon Falls Flea Market we dubbed tape guy that had a huge collection of bootleg VHS tapes of WCW & WWF events, usually 2 per tape which were never marked other than “wrestling” so you never knew what you were going to get.

We had a standard Flea Market route hitting Woolwich, Brunswick, & Lisbon Falls.  We would occasionally add Saco, Scarborough, and Searsport.  We also frequented Kay-B-Toys so often the staff knew us.  They would give us the promotional material once they were done with it.  I once got this large three foot by four foot ECW video game sign featuring Sabu on it.

We both had Wrestling rooms at our homes where our massive collections sat with no one but each other to admire them.   Once we started going to and participating in wrestling events I started collecting signed photos and getting pictures taken with wrestlers.  My only regret during this time was not getting more photographs with some of the greats in wrestling because I didn’t want to seem like a “stupid mark.”  I wish I would have known that everyone in wrestling is a “stupid mark” and didn’t care what others thought.

In 2007 I moved from Augusta to Pittston and I boxed up my collection.  I was looking forward to my new home where I was going to be able to turn a section of the basement into my wrestling man cave.  I had the majority of my collection in the basement stacked in boxes waiting for me to get the work done so I could start to display my items.  A few months later in the Spring a perfect storm of events resulted in the previous always dry basement to fill with over four of water.  I lost everything.

The only stuff I didn’t lose was my books both signed and not, DVD’s, ticket stubs, and binders with my signed photos and trading cards.  What I lost was essentially priceless and to summarize as I couldn’t possibly list everything, was over 500 VHS tapes, no exaggeration, a couple hundred magazines that were bagged and boarded, including every issue of Raw Magazine, and over 100 figures in packaged.  Practically nothing was salvageable and adding to was the water was disgusting filthy staining the figures and other things that you would think would be washable.

As sad as this was it did lead me to one of the greatest experiences of my entire life.  WWE Magazine had written an article that essentially was an error.  I wrote them an email telling them so and that I had the proof but it was destroyed in a basement flood.  Much to my amazement they wrote back, almost immediately, saying that I was right and asking about the flood.  I had written them letters and emails since I was a kid and had never gotten a response or had one of my letter published.

I wrote them back telling them about it, they asked for pictures, and one thing lead to another and they asked if they could post my letter and a couple of the flood photos and they wanted to send me something to start my collection up again.  I told them they could post my pictures and that they didn’t need to send me anything as I wasn’t looking for anything.  Next thing I know I’m getting invited to down to tour Titan Tower and be their guest for the day. 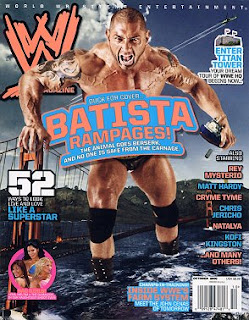 A couple months later this momentous event occurred and you can read about it in the pages of the October 2012 issue of WWE Magazine and they didn’t and interview with me and a two page photo spread of the day.  I even met Shane McMahon!  I’ll write a blog about it. 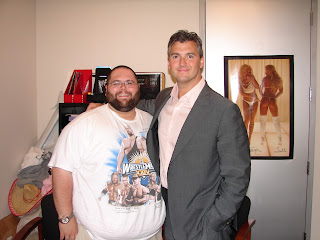 After this my collecting changed.  I stopped buying everything wrestling that I see and I have even slimmed down what I had l which surprised even me.  I still collect books, figures, and DVD’s but I only buy certain ones.  I only have about 20 figures now.  I save all my tickets stubs to everything I have been too in a very nice album.  I also have over 400 signed trading cards that I get only from the wrestlers themselves either in person or through the mail, never eBay or other third party.  I don’t buy 8 X 10’s at all any longer staying with my trading cards.  My collection of photo’s with people has grown dramatically these last few years as well. 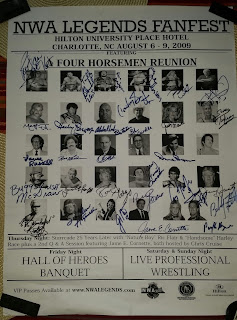 One of my favorite things that I own is a poster that I made for when Jay and I went to NWA Legends Fanfest in 2009 that I got all the Super ticket attendees to sign, which included the original Four Horsemen and Barry Windham!!! 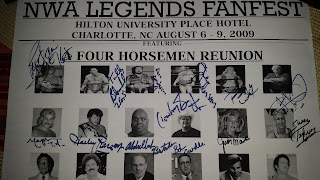 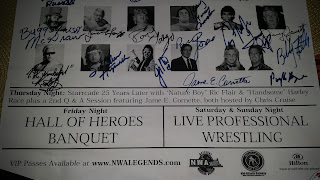 Later Readers!
Posted by Michael J. Labbe at 9:11 AM