The other day Cousin-In-Law Paul came over and we spent a few hours remembering the “American Dream” Dusty Rhodes by watching some of his matches.  We didn’t watch them in any particular order just played it by ear.    Be warned this is full of spoilers.

I had bought a DVD set from Highspots called ‘The Rise and Fall of Carolina Championship Wrestling” it’s a 5 disc set that is simply fantastic.  You can read all about it here on the Highspots website.   We decided to watch a couple of his most recent matches where Dusty faces  two legends of wrestling, one being one of his biggest rivals.

May 7, 2005
The Middle School           Gaffney, South Carolina
Bunkhouse Falls Count Anywhere Match
“American Dream” Dusty Rhodes vs. Terry Funk
At the time of this match 60 year old Dusty and almost 61 year old Terry Funk were definitely past their primes with Funks horrid knees not helping.  Both of these guys gave it their all battling each other bloody all around the arena much to the delight of the ravenous crowd.

February 12, 2005
Mulberry Rec Center      Lenoir, North Carolina
Bunkhouse Match with Special Referee “Hands of Stone” Ronnie Garvin
Tully Blanchard vs. “American Dream” Dusty Rhodes
This match started with a bang as both men couldn’t wait to get in the ring to start as they battled from the back out to the ring to begin the match.  At 51 Blanchard was in phenomenal shape and proved that he was still a bump machine throwing himself all around for Dusty.  This North Carolina crowd was on their feet to see these get it on one more time.  Dusty picked up the win after Tully was hit by the still devastating right of Ronnie Garvin.

Next we went back in time 30 years and put in the “Best of the Great American Bash” blu ray for two matches.

July 26, 1986
The Coliseum     Greensboro, North Carolina
Steel Cage Match
NWA World Champion: “Nature Boy” Ric Flair vs. “American Dream” Dusty Rhodes
This match is very well known because this is the night that Rhodes captures his third NWA World Championship.   Dusty only held the title for 14 days before dropping back to Flair. 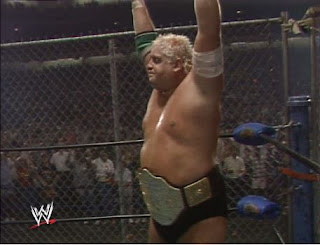 July 5, 1986
Memorial Stadium           Charlotte, North Carolina
Steel Cage Six Person Tag Team Match
The Midnight Express: “Beautiful” Bobby Easton & “Loverboy” Dennis Condry and James E. Cornette vs. Dusty Rhodes, Magnum T.A., and “Perfect 10” Baby Doll
I don’t ever recall seeing a mixed tag in Crockett promotions much less in a steel cage.  Clearly Baby Doll doesn’t get the credit she deserves stepping into a steel cage as the only woman in the match against one of the greatest tag team of all time.  The baby faces pick up the win when Baby Doll pins Cornette.

For the final matches we turned to the WWE Network 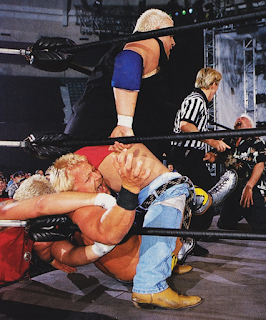 March 18, 2001
Memorial Coliseum         Jacksonville, Florida
WCW Greed
Dusty & Dustin Rhodes vs. “Nature Boy” Ric Flair & Jeff Jarrett
This was WCW’s last ever PPV and even though they didn’t know it at the time, this was also the Dreams first PPD match in WCW since Fall Brawl 1994.
Honestly not much to say about the match, the crowd was super into it with the Rhodes getting the win, after Dusty gave Jarrett a stink face, luckily he wasn’t wearing thong.

November 27, 1986
Starrcade ’86: Night of the Skywalkers
First Blood Match
World Television Champion: “American Dream” Dusty Rhodes vs. Tully Blanchard with James J. Dillon
This is my favorite time frame of wrestling to watch, this along with the Bash matches above, is what I love the most about wrestling.  I remember when my dad rented this tape, was I furious at Blanchard for his cheating ways.
These two beat the tar out of each other and after a ref bump Dusty ripped Blanchard’s forehead open with a bionic elbow.  While he celebrated and tried to revive the referee Dillon managed to use a towel and Vaseline to stop the bleeding and then loaded Tully’s hand with a roll of quarters.  A quick right hand later and the blood was flowing from Rhodes, which of course the referee saw and awarded the World Television Championship to the dastardly Tully Blanchard. 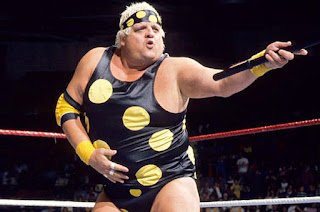 October 31, 1989
Kansas Expo Center, Topeka, Kansas
Saturday Nights Main Event
Aired November 25, 1989
“American Dream” Dusty Rhodes vs. Big Boss Man w/ Slick
Rhodes pinned Boss Man with a roll up after a few minutes of action.  This event marked the debut of Sapphire who was unidentified at the time but Rhodes brought her in the ring to dance with.

Definitely not a strong match to finish on, but I felt we needed a WWF match in there.  Had we had another half hour I would have put on his match with Corino in ECW.  It was a great few hours watching wrestling with a good friend as we remember the “American Dream” Dusty Rhodes in our way.

Later Readers!
Posted by Michael J. Labbe at 8:20 AM