On January 10, 2000 at WCW Monday Nitro in Buffalo, New York Jeff Jarrett was forced to compete in a Non-Title Triple Threat Theater Series with all his opponents to be mystery opponents chosen by commissioner Terry Funk.  Incidentally Chris Benoit served as special guest referee at each match.  So this was completely fair to heel Jeff Jarrett. 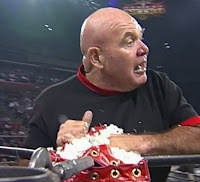 Steele brought the plunder with him and as Jarrett kept trying to get in the ring Steele would hit him in the head with an item or throw something at him.  Jarrett tried to walk out but he was prevented by Funk, Arn Anderson, Larry Zbyszko, & Paul Orndorff.

Steele was eating turnbuckle when Jarrett returned to the ring clobbering him with a guitar knocking the 63 year old man to the canvas.  Jarrett turned around and was scooped up by Anderson for a picture perfect spinebuster!  Benoit pulled Steele over Jarrett and administered a quick count. 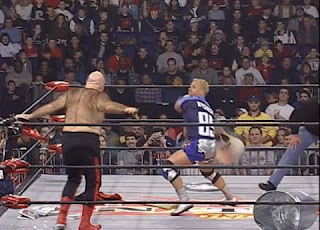 This is George "The Animal" Steele's only appearance in WCW and from what I can find he never appeared in Jim Crockett Promotions either.  The crowd popped huge for Steele and everything he did.

According to commentary a Dungeon Match is a no rope match that you can lose by pinfall, submission, or being thrown to the floor.  This match will be contested the same except the ropes will not be removed. 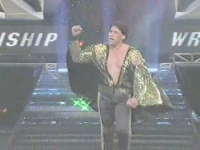 Jarrett came out and go into a verbal altercation with some Buffalo Bills football players at ringside, and even shoved Orndorff.  In the ring Jarrett jumped Santana who quickly made a comeback hitting his dropkick and flying forearm.  Then it got clustery.  Jarrett went for a pin, Benoit wouldn't count him down.  The Zbyszko and the Bill's football player got on the apron.  I think the only reason why Zbyszko jumped on the apron is because the the football player missed his cue.

The football player pushed Jarrett who turned into Orndorff who hit his patented piledriver on Jarrett, Santana covered him and a fast three count later Tito was declared the victor.   This is Santana's only match in WCW.  This crowd was insanely into match as well. 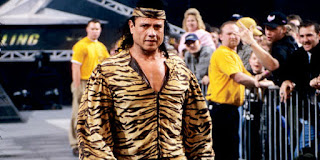 We see Snuka get out of a limo before the commercial break, when we come back we see Benoit has been laid out in the back and the cage is already down.  Mike Tenay mentions that this will not be the cage we see this Sunday at the PPV, that that cage will be bigger.  Jarrett gets in the ring and puts down the Buffalo Bills.  Snuka comes out to a decent ovation.

Jarrett jumps Snuka sending him into the cage three times.  Benoit comes out holding his head.  He tried to get in the cage and Jarrett knocks him down twice.  Benoit in the cage now and he chops Jarrett sends him into the steel and hits a snap suplex.  Jarrett brings the guitar into the ring and he is followed in by Zbyszko and Orndorf who tee off on Jarrett. 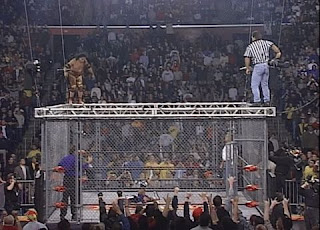 Snuka gets to his feet and sees a prone Jarrett in the center of the ring and then looks up.  The crowd explodes.  At 56 years old Snuka climbs to the stop of the cage, Benoit is on top of the cage in the other corner.  Snuka flys and it's all impact on Jarrett!  Benoit lands a diving headbutt then makes the three count.  Seriously go out of your way to see this!  This is Snuka's second appearance in WCW, the first was Slamboree 1993.

Again these three matches were to be precursor to the big PPV in just six days.  Well a lot happened in those six days.  Bret Hart was kicked in the head by Goldberg at Starrcade December 12, 1999 giving him a concussion.  He tried to battle through it and even competed in several more matches but post concussion syndrome would force him to retire and relinquish the WCW World Heavyweight Championship.

Hart was originally scheduled to defend against Sid Vicious, with Hart out WCW decided to put Benoit in his place and wrestle Sid for the vacant championship.  WCW claimed in a kayfabe injury that Jeff Jarrett has suffered a concussion from Benoit's diving headbutt off the top of the cage and was unable to compete, they even stripped him of the United States Championship.

Instead of a no rope Dungeon Match Kidman took on Malenko in a Catch as Catch Can.  The rules were basically the same you can lose by pinfall, submission, and both feet touching the floor, just with the ring ropes.  After two and a half minutes of not much happening Malenko pulled the classic heel move of taking a powder to slow down the pace and lost the match. 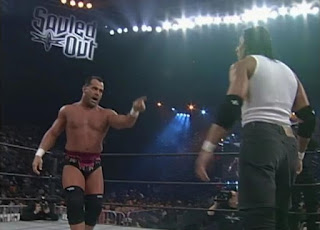 It was awkward as Tony Schiavone said the match is over isn't it and the referee Charles Robinson was telling Malenko to get back in the ring.  Word must have gotten to Robinson in his ear piece as he quickly called for the bell.

So this is a an anything goes Bunkhouse match where historically weapons and plunder are used from the opening bell.  Or at the very least they have taped fists and are just laying into each other in rough fashion.  Well not in Bunkhouse match!  They came dressed to the ring in their regular gear and proceeded to have a wrestling match. 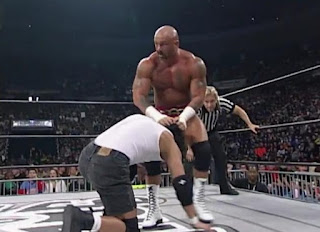 It went 10 minutes bell to bell, about six minutes in Saturn pulled out a table which Kidman then set up on the floor.  At about eight and a half minutes Saturn essentially back body dropped Kidman from in the ring through the table on the floor.  About 90 seconds later Kidman reversed a powerbomb into a facebuster and pinned Saturn.  The only other Bunkhouse-ish thing about this match was the two pinfall attempts that Saturn made on the floor.

The Caged Heat steel cage is basically Hell in a Cell.  Kidman jumped the Wall before the got into the ring.  Kidman tossed him into the cage then beat him down with a few chair shots.  Wall recovered and took the action into the ring.  Pretty lackluster match with The Wall getting the pin in just over five minutes after a chokeslam. 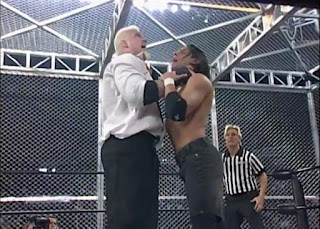 That's what WCW decided, lets not put Kidman over lets beat him in match three in a cage we spent too much money on it's construction and setting up and have it barely used.  Nauseating.

Incidentally on Souled Out Kevin Nash defeated Terry Funk to win the commissionership of WCW and on Monday Nitro the next night he awarded Jeff Jarrett the United States Championship, talk about a fast recovery.

The Triple Threat Theater was good in concept when it was Jeff Jarrett vs. Chris Benoit, even the Nitro preview with Jarrett vs. Tito, Steele, & Snuka was entertaining for what it was.  However the bastardized version that we got on Souled Out with Kidman was ridiculous.

Later Readers!
Posted by Michael J. Labbe at 5:38 AM