The WWE, then WWF, launched their Hall of Fame on the March 22, 1993 episode of Monday Night Raw.  The first and only inductee that year was the 8th Wonder of the World Andre the Giant who had passed away six weeks prior on January 27, 1993.

That same year on May 23, 1993 at the World Championship Wrestling Pay Per View Slamboree: A Legends Reunion WCW launched their own Hall of Fame.  Now I'm don't know if WCW already had this in the works before the WWE or if they followed suit.  Either way it's nice that for three years WCW honored the legends of wrestling with a ceremony at Slamboree.

Two of the biggest differences between the WCW and WWE Hall of Fame's is that WCW held theirs at a PPV event and those events featured matches pitting inductees and other legends against each other. 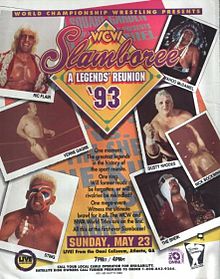 Gordon Solie was the master of ceremonies introducing the inductees into the Hall of Fame.  Gordon began the ceremony reading a list of those who are no longer with us:  Buddy Rogers, Andre the Giant, Pat O' Connor, Gene Anderson, Dick The Bruiser, and Wilbur Snyder.  I'm not sure why these five were announced, the died between 1990 - 1993.

Gordon read a small bio of each inductee as a short video package with a mixture of newspaper clippings, still photos, and video clips played.  Each inductee was given a large plaque of their likeness.  Mike Graham accepted on behalf of his father Eddie Graham who had died in 1995.  The ceremony was held in the ring about 90 minutes into the show and lasted only about 10 minutes.

The show opened with many legends already in the ring none of them were introduced, then Maxx Payne came out played a guitar solo.  After a bit about a dozen men came out barefoot in small trunks carrying an enclosed Cleopatra style cart, when they set it down The Fabulous Moolah exited, she was given a full introduction.  Others were interviewed in between matches by either Missy Hyatt or Eric Bischoff. 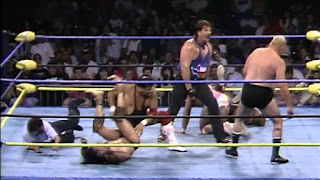 I thought it was odd that they had Muraco and Snuka on the same team considering their past in the WWF.  They even referenced how they still seem to have bad blood.  Match wasn't overly exciting they kept it basic with a routine match.  Murdoch pulled off a flying head scissors that was shocking.  The match was thrown out in about 9 minutes when all the wrestlers were fighting in and around the ring.

Being an Atlanta native Thunderbolt Patterson got a tremendous pop.  Bullet Bob was supposed to be Patterson's partner but had to have surgery.  Brad Armstrong came out after Koloff & Raschke called all of the Armstrong's cowards.  Brad came to the ring in street clothes wrestling in jeans and sneakers.  This was a nice touch because it made it feel spontaneous.

The faces jumped the heels clearing them from the ring before the match settled down into a tag team match.  I was surprised to hear Tony Schiavone and Larry Zbyszko talk about how Koloff defeated Bruno Sammartino in Madison Square Garden, and then lose the title to Pedro Morales.  They never mentioned WWF by name but it's obvious what they were taking about.  The finish came at 4:39 seconds when Patterson pinned Raschke after a chop to the throat. 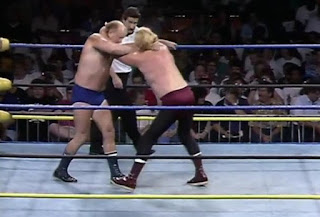 Johnny Valentine joined Tony and Larry on commentary.  This match was billed as NWA vs. AWA and this was a Dream Match from the 70's that never happened due to politics. Incidentally a simple google search proves this wrong.  These two men put on a pretty fantastic match.  They basically fit a 1 hour time limit draw into a 15 minute match.  The only black eye in the match was when there was 30 seconds left and Bockwinkel had a figure four on Gagne and Kiniski ran into the ring kicking Bockwinkel, the ref let it go.  They then did a series of pin fall attempts leading to the bell ringing.

Listening to the commentary there was an entire weekend of festivities including a banquet dinner called Slamfest, a Sunday morning breakfast and autograph signing. 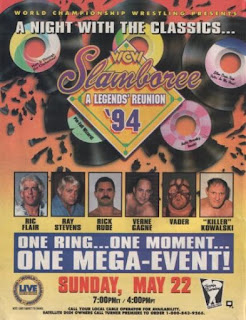 May 22, 1994 The Civic Center, Philadelphia, Pennsylvania

The ceremony was held in the ring and once again Gordon Solie was the master of ceremonies introducing the inductees with Lou Thesz handing out the plaques.  Similar to last year Gordon read a small bio of each inductee and a short video package was played.  Dick The Brusier had passed away in 1991, his daughter accepted on his behalf. The show opened with "Mean" Gene Okerlund announcing the legends listed above when they came out and a split screen showed a live shot on the left and vintage photo of the wrestler on the right.  Terry Funk was announced but did not come out.  The legends were interviewed in between matches.

Gordon Solie called the action with Bobby "The Brain" Heenan.  Blanchard got a tremendous pop when he came out from the Philadelphia crowd who broke out into a Blanchard chant.  I cannot say enough just how much I love this crazy ass match!  Funk also got a grand ovation and pyro!  An ECW chant broke out, hat guy from was sitting front row. 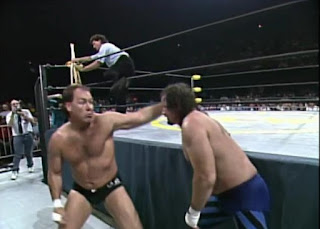 These two guys beat the absolute shit out of each other!  The match was on the floor, in the ring, on the walkway to the ring, plunder was used.  I mean Funk piledrove Blanchard three times!  The fans chanted we want blood and after Patrick threw the match out chanted bullshit. 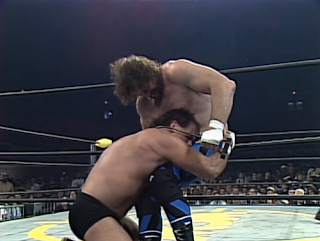 Referee Nick Patrick had no hope in maintaining control of the match even admonishing Funk, "I will ring this bell right now, you don't go on the floor, and you don't bring any more furniture in this ring" 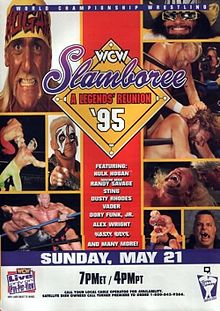 This years induction ceremony was held on the ramp at the entrance way and not in the ring.  Gordon Solie once again the master of ceremonies, he read a brief bio of each inductee and a very brief video package played.  This year instead of plaques the honorees with given a trophy that was handed to them by Gordon,  Also each inductee was given a few moments to say something.  Studd's son Robert John Minton accepted on his family's behalf.

Gordon didn't know he was being inducted.  After Dusty finished he said there was one more inductee into the Hall of Fame and Mean Gene walked out Solie thought it was him until Rhodes started talking about Solie.  His reaction was quite amazing as he seemed truly surprised.

The ceremony itself was longer this year than the previous years.  Although unlike the last two years no other legends were in attendance or acknowledged other than the Hall of Fame honorees.

This match was shown in Black and White because people use to have black and white TV's, yup that's the reason.  Also no entrance music for either man and the action was called by Gordon Solie & Bobby "The Brain" Heenan. 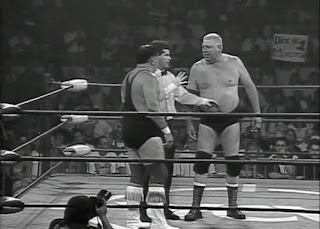 Very slow and methodical match until the last minute or so where the pace picked up.  Finish came suddenly when Wahoo chopped Murdoch who was coming off the ropes and scored the pin after just over six minutes.  It was good for what it was.

In total WCW inducted 17 individuals into their Hall of Fame of those ten have been inducted into the WWE Hall of Fame.  Those who haven't: Mr. Wrestling II, The Crusher, Dick the Bruiser, Ole Anderson, Masked Assassin, Wahoo McDaniel, and Angelo Poffo.  Of those that haven't been I can really only see Wahoo McDaniel getting inducted in the future.  If Ole Anderson was going to go in I would assume it would have been when the Horsemen back in 2012.

Later Readers!
Posted by Michael J. Labbe at 7:08 AM