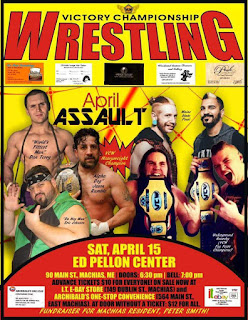 Ringside: Primer comes out and says that he is the new GM of VCW and he will also serve as the ring announcer for the night. He also said that there would be some different things going on tonight. He said that the tag team title match would be the new main event and that after every match he would be evaluating them.

Mr. Wrestling 9 was Dan Terry under a mask. The other 2 masked guys where Tim Lennox and Ike. Lennox was barefoot and wearing rolled up sweatpants. Ike's masked guy came out with a plastic wiffle bat and all three took turns hitting Rumble with it throughout the match. This match kinda sucked. Mainly because generic masked characters are terrible especially when it is more than obvious who they are. They did to a ridiculous lockup that went all over the building, to the back and even outside. Rumble got the win after a backstabber. This would have been a million times better if it were Rumble vs. Dan Terry.
3.75/10

This was a solid match. The crowd was behind Eric the entire time. Good action throughout but in the end Eric got the win after a splash.
5/10

Beau did a good job playing the crowd. He came out with a can of febreze and was spraying the audience because they stunk. This match was kinda dumpy. Strange's comeback was terrible, after getting beat up for 4-5 minutes his comeback was to work the arm. Awful. I would have thought that Beau would have lead Strange much better than that.
3/10

This was a decent and fun match. There was continuous action throughout. Calvin Campbell, Dan Terry and Ike are solid guys but Kenny Thunder seems to be green and does some really odd moves that made me wonder, what the fuck his he doing? Campbell got the cheating win with he feet on the ropes.
4.75/10

This was good tag match. They fought all over the building beating the hell out of each other. They even broke a chair during a flurry of suicide dives. The champs got the win when they wrecked Aggro with a title belt. O'Reilly and Lennox make a good team. I would like to see a rematch between these two teams.
7/10

In Ring: Ike goes in the ring and bites Aidan Aggro on the calf. He then gets wrecked for his trouble.

Overall the show scored a 23.5 out of 50 for an overall score of 47%. I enjoyed this show especially the main event. It was nice to see a small indy show in State and see a bunch of guys I don't normally see. The Ed Pellon Center was a great place to have wrestling. Its spacious and had high ceilings.

After the show Rumble said that the next time they come to Machias they will have a tables match, submission match, a strap match which is basically a fans revenge match as well as a fans bring the weapons match. I'll probably be going to the next show.