Here is my review of Northeast Wrestling's King of Bethany on November 12, 2016 in Bethany, Connecticut. 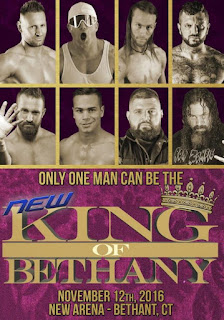 Match 1: Donovan Dijak defeated Jimmy Preston to advance in the King of Bethany Tournament
This was really kinda average and slightly boring. Dijak is awesome and Preston is solid but for some reason they just didn't click.
5.75/10

In Ring: Ron Zombie comes out and says that he was injured in a Final Deletion Match with Matt
Hardy vs. Team Sazaam the week before and he blames it on Dan De Man.

Match 2: Vinny Marseglia defeated Keith Youngblood to advance in the King of Bethany Tournament
Solid match. A good match from Marsgelia. It looked like Youngblood was going to win but in the end Vinny got the win after a Swanton Bomb.
7/10

In Ring: Big Jym Anderson says that since Ron Zombie is out of the tournament, that means there is an open spot to face Wrecking Ball Legursky. Wrecking Ball comes out but is kind of hesitant. Anderson then calls him Wrecking No Balls. Wrecking Ball then accepts the challenge.

Match 4: Wrecking Ball Legursky w/Marshall McNeil fought Big Jym Anderson to a double DQ in a King of Bethany Tournament Match
This was quick but they beat the hell out of each other. They continued to fight after the bell until Legursky hit a World's Strongest Slam and left.
3/10

Match 5: Flip Gordon defeated Mike Bennett to advance in the King of Bethany Tournament
Good match with Bennett working Flip's arm for a portion of the match. A good comeback for Flip with a few false finishes. Flip got the surprise upset win with a springboard superkick.
8/10

Match 6: TK O'Ryan defeated Warbeard Hanson to become #1 Contender to the Northeast Wrestling Championship
Great match that spilled to the floor early. Lots of great back and forth action. Hanson tweeked his knee early and TKO took advantage of that by getting a submisson win with the Glue Factory. These two guys put on a hell of a match.
9/10

Ringside: Vik Delicious and Ant Battle come out from the back fighting. Hale Collins comes out and he helps Delicious double team Battle until Chris Battle comes out with chairs and chases off The Now.

Match 7: Flip Gordon defeated Donovan Dijak to advance in the King of Bethany Tournament
Solid match that saw Flip take a vicious chokeslam on the ring apron, then get dominated by Dijak. Flip got another surprise upset win, this time with a West Coast Pop. After the bell Dijak wrecked Flip with a Feast Your Eyes.
7/10

Match 8: Mark Shurman defeated Scotty Slade by DQ
This was the battle of former Team Friendship partners. This only lasted a few minutes and was really average. The DQ came when Donovan Dijak came out and attacked Shurman until Jimmy Preston chased off Slade and Dijak. Apparently in NEW Slade is a member of The American Destroyers.
3/10

In Ring: NEW Champion Brian Anthony and his manager Steve Stamos came to the ring for a championship celebration. Stamos had a video package created for Anthony. They put each other over for a few minutes then a cake is brought out. TK O'Ryan comes out and says he wants some of the cake. TKO then gets a ton of cheap pops until he goes in the ring and jams Stamos into the cake.

Match 9: Flip Gordon defeated Vinny Marseglia to win the King of Bethany Tournament
Good main event with Flip playing the underdog very well. Vinny introduced a chair but the referee took it away allowing Flip to get the advantage for a few minutes. Vinny hit a Swanton Bomb and surprisingly Flip kicked out. Flip then hit a 450 Splash but Vinny kicked out. Flip then hit a Corkscrew splash off the top for the win.
8.5/10

Overall this show scored a 53.25 out of 90 for an overall score of 59.16%. I have always enjoyed the tournament format and this show was no different. There were some bad matches but also some really good ones. Check this show out for the great performances by Flip Gordon as well as O'Ryan vs. Hanson.