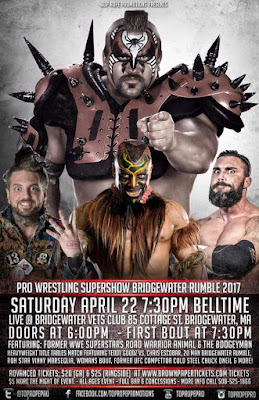 Here is my review of Top Rope Promotions Bridgewater Rumble 2017 in Bridgewater, Massachusetts on April 22, 2017.

Match 1: Brian Milonas defeated Nico Silva
This was a solid match and a good opener. It was my first time seeing Nico Silva and I was impressed. He is a good athlete and was super over, he just seemed like he was still kinda new. They did a good big guy vs. small underdog story well in this match but in the end Silva lost to a catatonic.
7/10

Match 2: Nick Westgate defeated Kenway
Westgate dumped Kenway on his head multiple times with german suplexes. At one point Westgate blocked a hurricanrana into a sitout powerbomb but for some reason Kenway went for the pin.
4/10

Match 3: Ashley Vox defeated Delmi Exo w/Jawsolyn
I expected a much better match from these two than we got considering they have wrestled each other many times before.  I did get to see one of my favorite moves, the foot DDT.
5/10

In Ring: The Kool People come out and make fun of the crowd and then challenge the Devil's Doormen to a match. Brandon Webb then comes out and says that he is gonna kick their asses by himself.

Match 3: Brandon Webb & The Boogeyman defeated Kool People: DJ AC & Sammy Deleon
This started out as Webb vs. The Kool People. Webb got beat up for a few minutes until the Boogeyman came through the crowd and joined the match. They battled all over the building with Kool People getting wrecked the entire time. Boogeyman hit a double chokeslam for the win, then ate worms and spit a bunch of them on Kool People.
5/10

Match 4: Chuck O'Neil defeated Vinny Marseglia
This was the match of the night. Its really weird saying that because I'm not a fan of Marseglia. Good back and forth action with a bunch of ringside action as well. O'Neil is hated in Top Rope and he seems to enjoy it. Quite a few false finishes in this one. In the end O'Neil got the win after a suplex.
8/10

Match 5: Vinny Marseglia won a 20 Man Battle Royal
Except for Marseglia, Brian Milonas, Chuck O'Neil, Nico Silva and Nick Westgate, the rest of the field were either trainees or scrubs. The final four came down to Marseglia, Milonas, O'Neil and Silva. Silva eliminated Milonas which kinda surprised me. Then he went after O'Neil. Apparently these two have a very heated feud going on. While they were battling, Marseglia snuck in the back door and eliminated them both.
5/10

Match 6: TRP Champion: Teddy Goodz defeated Chris Escobar in a Tables Match with Roadwarrior Animal as Special Enforcer to retain
This one started out hot with battle going all over the building with Escobar getting wrecked. Once it got back into the ring it became really average. Escobar finally got the advantage and set up a table at ringside. Teddy then brought a table into the ring. Escobar regained the advantage and laid Teddy out on the table. As he went to jump off the top rope, Animal smashed a beer bottle over his head allowing Teddy to toss Escobar off the top and threw the table for the win. I have no idea why Animal did that.
6.75/10

In Ring: Teddy Goodz thanked everyone for coming and said he wanted to put someone through the table that was still set up at ringside. He teased a bunch of people at ringside but then the sound guy came out and Teddy wrecked him threw the table.

Overall this show scored a 40.75 out of 60 for a show score of 6.79. This was a solid show that I enjoyed. It was a pack house in a good venue. There were 3 good matches on this show but there were also some dumpy ones too. I could have done without the idiot in front of use who apparently knew nothing about wrestling as well as the drunk idiots behind us that wouldn't shut up the entire night. They even yelled some really bad stuff at Mike Gamble during the Battle Royal. Stuff that should have gotten then thrown out of the building.