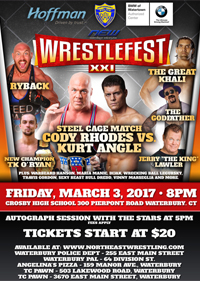 Here is my review of Northeast Wrestling's Wrestlefest 21 on March 3, 2017 in Waterbury, Connecticut.

In ring: A guy who I believe to be the authority figure, comes out and announces that there have been some changes to the matches. Warbeard Hanson won't be battling TK O'Ryan for the Northeast Wrestling title. Instead he will be battling Ron Zombie and O'Ryan will defend against a mystery opponent.

Match 1: Flip Gordon defeated Brad Hollister and Vinny Marseglia
This was a good match but it would have been way better if Vinny wasn't in it. All he did was gyrate like an idiot and no sell everything. Hollister on the other hand was a beast hitting suplexes all over the place including one on Flip while he had Vinny in a fireman's carry. Flip won with a 450 splash on Hollister.
7/10

Match 3: Wrecking Ball Legursky w/Marshall McNeil defeated Donovan Dijak
Good big man match. I was surprised at how over Wrecking Ball is in this fed even though he is a heel. Dijak got his ass kicked for most of the match which made Wrecking Ball look like a monster destroyer. Dijak made a good comeback but surprisingly lost to a World's Strongest Slam type move.
7.25/10

Match 4: Ron Zombie defeated Warbeard Hanson
I had never seen Zombie before and I wasn't impressed. This match was really slow and boring but this was no fault of Hanson. He did the best he could.
4/10

Match 5: Bull Dread defeated Cam Zagami w/Romeo Roselli by DQ
This only lasted a few minutes, then Roselli got involved causing the DQ.
1/10

In Ring: Bull Dread challenged Zagami and Roselli to a tag team match. Roselli said that he didn't have a partner. Dread then brings out Jerry "The King" Lawler.

Match 6: Jerry "The King" Lawler and Bull Dread defeated Cam Zagami and Romeo Roselli
This match wasn't very good since Bull Dread is terrible but it was awesome to see Lawler wrestler. He hit a dropkick and got the win after a piledriver on Roselli.
5/10

In Ring: Lawler and Dread celebrate the win until The Godfather comes out with Mandy Leon and Maria Manic as his hoes and they join the celebration.

In Ring: Cam Zagami and Romeo Roselli are licking their wounds and whining about their loss, saying that they weren't ready. Roselli then says that they won't leave until another challenger comes out. Great Khali then came out and wrecked them both with brain chops.

Match 7: Ryback defeated Jake Manning
This was really average. I don't like Jake Manning and that didn't change in this match. Ryback dominated him for most of the match with Manning getting very little offense. Ryback got the win with Shellshock.
5/10

Match 8: Mike Bennett defeated NEW Champion TK O'Ryan to win the title
This is where the show really started to get good. Mike Bennett was revealed as the mystery opponent. The crowd chanted "where is Maria". Bennett said that she was there. This match was very good. I am super impressed with O'Ryan. If he continues to improve I could see him as ROH Champion someday. Some crazy spots including Bennett hitting a pildedriver on a table a ringside. Near the end Maria came out with a chair causing a bunch of confusion which allowed Bennett to hit a low blow and get the win.
8.5/10

In Ring: TK O'Ryan was pissed and challenged Mike Bennett to a rematch at the next show. 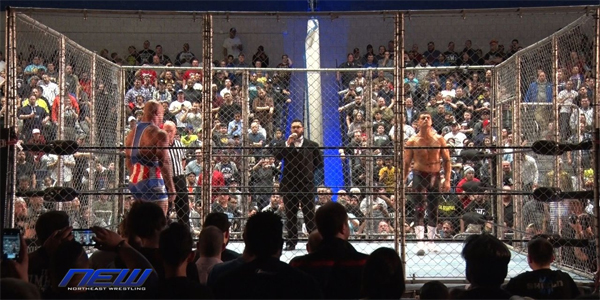 A very good cage match that probably would have gone longer than the 12-15 minutes it got because the cage was kinda dumpy and it took awhile to get it up and make it as safe as they could. Rhodes hit a sick moonsault off the cage but missed. He did get the win in the end with a surprise small package.
8.5/10

This show scored a 52.25 out of 80 for an overall score of 65.31%. I really enjoyed this show. There were 2 very good matches and a bunch of big names to meet. I was awesome to see Jerry Lawler wrestle for the first time in person. It was also really cool being a crowd of 3,000 in a high school gym.