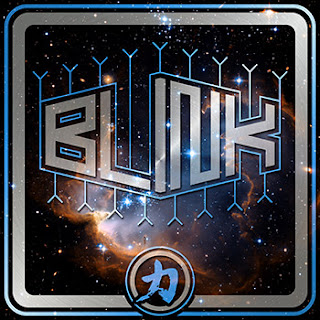 March 4, 2017 was Chikara's return to Maine since The Great Escape July 28, 2012, you can read my report about that show here.  Chikara is unique in that they want to provide great family wrestling events and in encouraging families to bring their kids out for an afternoon of wrestling for every adult general admission ticket sold a child 12 and under can get in for free.  That's pretty awesome!

Alex, Addison, Canaan, and myself loaded up in Vanna and headed south to Kennebunk for the Doctor Who theme inspired Season 18 Maine stop over Blink.  Blink is the Series 3 episode 10 story that is the introduction of the Weeping Angels statues who are featured in several great episodes including the very emotionally powerful "The Angels Take Manhattan" the episode in which Amy Pond and Rory are written of the show.  But this blog is about wrestling not Doctor Who so lets get back to the wrestling.

The doors opened just after 2pm for the 3pm show, not a lot of people waiting when the doors opened, I'm sure the negative 10 windchill kept them from potentially having to wait outside.  Prior to the start of the show I got a couple trading cards signed by DUSTIN aka Chuck Taylor and a photo with him.  Also I got photos with Troy Nelson, Bryce Remsburg & Ophidian.

At intermission I got a photo with Dez Peloton, Addison wanted her photo with Mr. Football and Solo Darling.  I'm not sure who Canaan got pictures with, I'll have to check his phone.  Also in a very unusual move for me I spent money on the merchandise table buying Canaan and Fire Ant mask and Addison a Princess Kimber Lee t-shirt.

Mikey and Roy met us at the show and JD made the drive from Vermont, he loves himself some Chikara.  Josh rode down the Randy who had a Limitless table selling tickets and merchandise.  I also saw Larry Huntley and Robbie Ellis.

Some of the action shots are a bit soft, but I was using my phone.

This was a fun and very entertaining contest that saw Dez Peloton get the kids involved in the action including a chop-fest, that Addison refused to participate in because it wasn't nice, and saw two kids at the urging of Peloton blast Junior with a hairdryer melting him.  Eventually El Hijo got the upperhand in the ring and managed to make the save on Junior, then applied ice packs to refreeze his partner. 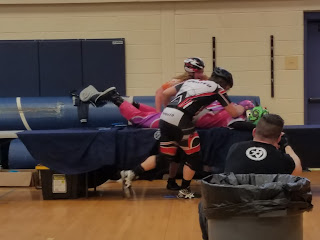 At one point during the match Peloton slid El Hijo across the merchandise tables knocking DVD's and masks all over.  Addison was very upset by this because the girl had work hard setting all that up and they ruined it.  After the match, next thing I knew Addison was over there telling her how sorry she was for them doing that and helping her fix things.  She also gave Peloton a piece of her mind at intermission for doing it.  The finish if the match came when Jasper hit Junior with a cross body off the top rope. 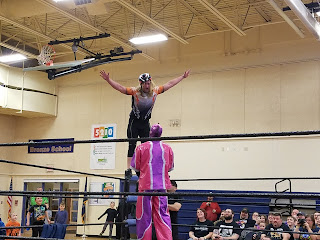 Before the action could begin referee Troy Nelson had to cut the protective tape bands off the pincher like hands of Crawdad.  This was a good match. 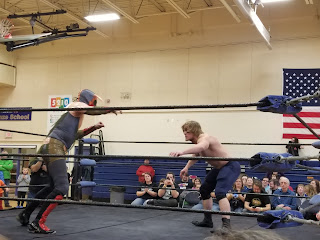 Touchdown is very good in the ring, quite athletic, and I'd like to see him in the title picture.  Touchdown got the pin after overhead suplexing Crawdad from the outside back into the ring.

Oleg is a viking wildman and is very entertaining and for a big guy he can really go.  The action quickly spilled to the floor with Oleg nailing a cannonball off the stage to the floor on Wani. 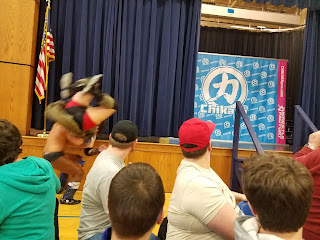 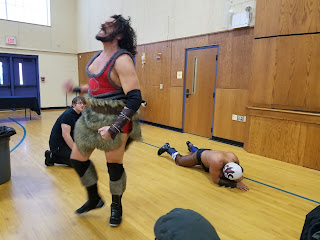 Near what would be the end of the match Kobald came out pleading with Oleg to "fix him" and has he was about to oblige Wani attacked Oleg from behind with a push broom handle drawing the DQ.

My daughter was super excited to see a lady wrestler on the card.  I was excited to see DUSTIN on the card because he is always very entertaining.  Chuck Taylor™ tried to serenade Solo throughout the beginning of the match until he finally got the message that she wasn't interested.  DUSTIN clearly is not keen on tagging with the man that stole his name from him but still has the desire to win no matter the cost. 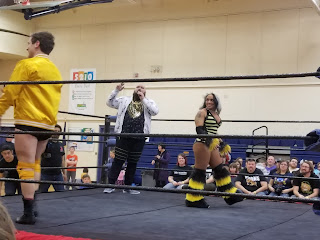 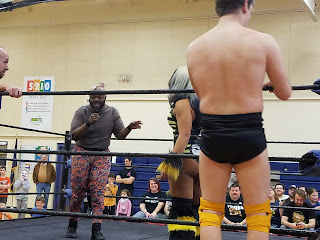 I really enjoyed the match it had so many great elements, comedy, great mat wrestling and technique, and it was very entertaining.  The finish came when Chuck Taylor™ rolled up Solo for the win.  This also gave their team three points to challenge for the Campeonas de Parejas at WrestleMania weekend in Orlando. 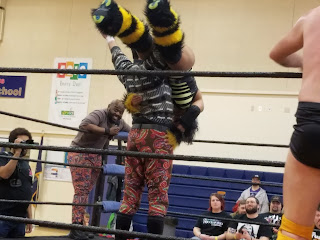 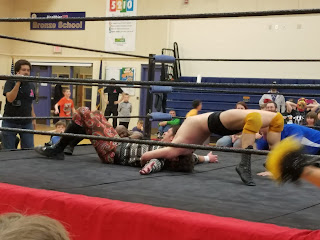 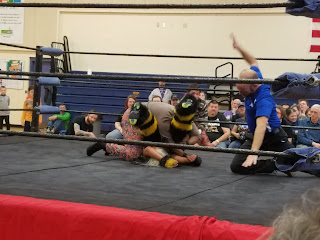 This was a really good match, much better than I had anticipated it would be.  Ophidian is quite the impressive high flyer and got the win with a double knees off the top rope.  After the match Ophidian tried to show respect but Leary jumped him. 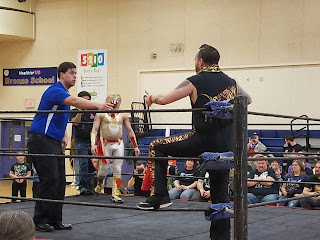 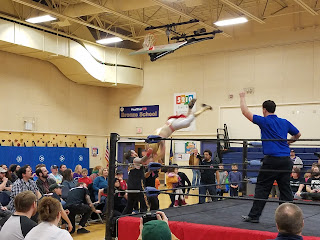 This lead to Ophidian hypnotizing Leary into dancing for the delight of the crowd before breaking his spell. 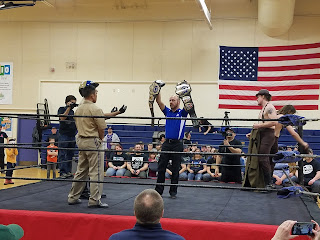 This was great match, DeFarge & Crummels have a gimmick similar to the Vaudevillians dressing "old timey" and The Force are police officers complete with K9 who comically took himself to the back after their entrance. 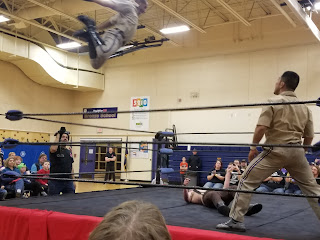 The first fall came when after 20 minutes of action Crummels reversed the small package of Meloni when the referee was distracted allowing DeFarge to get the pin.  The second fall came and few minutes later when The Force returned the favor pinning Crummels with a small package to even the match at 1 fall each.

The third fall came after 10 plus minutes of fast a furious action with several quick nears falls.  The Force looked like they had the match tied up and appeared to be going for a doomsday device when Crummels wiped snot in Meloni's face causing pushing him into his partner crotching him on the top turnbuckle. 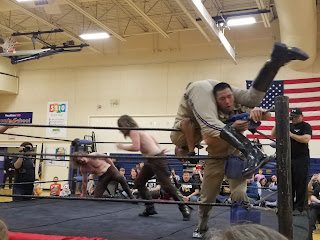 Crummels and DeFarge then busted out some the best tag team tandem offense I have ever seen that really needs to be seen to be believed.  From a monkey flip off his partner to his opponent to a flipping splash combination that got them the win retaining their titles.

During the first fall when Barksdale was in the ring DeFarge was getting the better of him during the initial lock up.  Addison was yelling words of encouragement to the officer and his partner encouraged her to yell louder, so she did.  I was then feeding her things to say, "You got this", "reverse it", "break his arm" and ect and each time Meloni would repeat what she said verbatim.  It was quite hilarious.

In Chikara if you chant one more match they will give you one more match.  This match didn't last long but it was intense.  Quickly spilling to the floor Calhoun launched himself off the top rope and I'm pretty sure he landed on his head, it was scary. 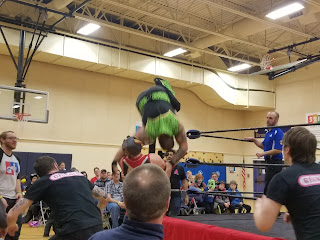 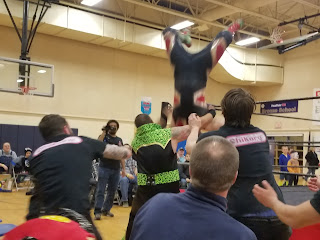 Crab answered with a moonsault to the floor.  Back in the ring Calhoun reversed Crab into a wicked samoan drop for the pin. 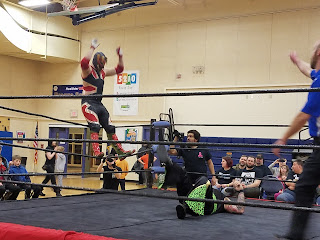 This was a fantastic afternoon of wrestling, the kids had a great time and everyone from the wrestlers to the staff were wonderful.  Ms. Yolanda was so great with Addison who wanted nothing more than to help her all night long and keep her updated on the action of the night.  I can't imagine anyone having anything negative to say about Chikara and the brand of family friendly wrestling that they present.

I guess one thing did bug me a little.  I pre-bought my ticket online and when you do you print this generic large piece of paper as your ticket.  I collect my tickets stubs and have the ticket to every event I have been to dating back to 1989, I have them in a large photo album.  When we got to the show they had actual tickets available with the event, date, and what not printed on them.  I asked if I could have one as I save them and was told no, they are for walk up sales only.  Which really, I mean I paid to get in.

After the show Mikey and Roy followed us and I introduced everyone to Rapid Ray's in Saco. 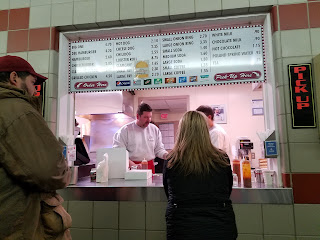 Ray's is unique as there are not tables and chairs, just counter rail around the outside wall to stand at to eat.  It's a small menu of burgers, dogs, fries, onion rings, and some seafood.  The onion rings are fantastic!  They all enjoyed their food and agreed it was a great stop! 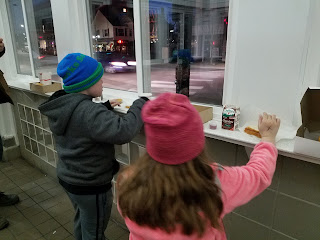 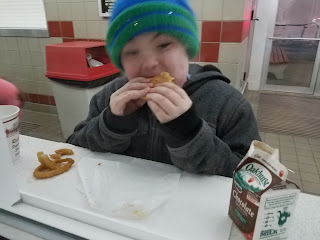 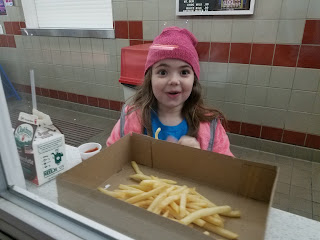 The best thing about a matinee show is that we got home before 8pm.