I recently was looking through the vault section of WWE Network in the AWA and found four of their supershows, including the only AWA PPV just listed in the TV section.  The shows are this one here, Super Sunday, WrestleRock 86 and Superclash III.

"Rock N' Roll" Buck Zumhofe vs. Sheik Adnan Al-Kaissie
This match was horribly long!  First all the walk and talk of Al-Kaissie at the beginning of the match, then the super slow cadence of it made it practically unbearable.  Al-Kaissie got the pin with his feet on the ropes similar to how Billy Graham pinned Bruno.

Super Ninja w/ Mr. Go vs. DJ Peterson
Super Ninja's arm gauntlets cover the back of his hands and I'm pretty sure they are supposed to be chinese stars, but they are swastika's. 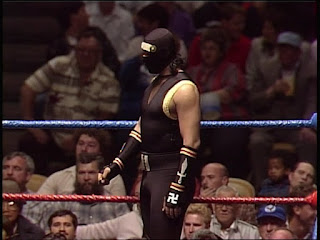 This match was not as terrible as the first, but pretty darn close.  15 minute time limit draw.

Women's Champion: "Sensational" Sherri Martel vs. Madusa Micelli
1 Fall 1 hour time limit
Doug Somers accompanied Martel to ringside. Great match!  Very hard hitting, I mean these girls really put it to each other.  Madusa busted out a picture perfect airplane spin!  Martel got the win with a roll up pulling the tights. 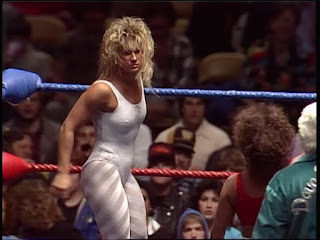 World Heavyweight Champion: Nick Bockwinkel vs Curt Hennig
1 Fall 1 hour time limit
Fantastic match that went 23 minutes.  Bockwinkel worked the left arm for the majority of the contest out wrestling Hennig frustrating him.  As the match built towards a finish Curt attempted several pin falls but couldn't put the champion away further frustrating him.  Then it appears Larry Zybyszko who was sitting at ringside handed Hennig a roll of quarters clocking the champion and getting the three count. 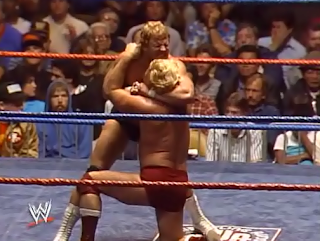 After the match Hennig gave Zybyszko the roll back, but Ray Stevens at ringside exposed the foreign object.  A meeting in the ring with the referee, Stanley Blackburn, and Stevens leading to Blackburn declaring the title to be held up until the championship committee can review the tape.
Hennig was the babyface in the match, and the fans were excited that he won the championship.
Much like at Super Sunday the crowd chanting bullshit after the reverse decision.  Eventually though the decision was upheld and Hennig was declared champion. 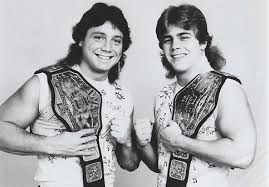 Six Man Tag
The Midnight Rockers: Shawn Michaels & Marty Jannetty, and Ray "The Crippler" Stevens vs. "Playboy" Doug Somers, Kevin Kelly, & Buddy Wolfe, w/ Sherri Martel
Jannetty took a beating for a long, long time, playing what I dub the Ricky Morton roll of the tag match.  He would fire up and the crowd with rise up with him, until the heal would bring him back down.  When he finally made the hot tag, after at least 15 minutes of punishment, the crowd figuratively exploded!  It was the hottest of hot tags!
The finish came when a minute after Jannetty finally tagged out, the match broke down and Stevens rolled up Somers in a small package for the pin.  Stevens was not the legal man in the ring.

Jerry Blackwell w/ Buck Zumhofe vs. Boris Zhukov w/ Adnan Al-Kaissie
This was nothing more than a steaming pile of garbage.  Blackwell won.

Jimmy "Superfly" Snuka & Russ Francis vs. The Terrorist & The Mercenary
Russ Francis played in the NFL for the San Francisco 49ers and he spent a lot of time on the outside of the ring in this match.  Once Snuka finally made the tag Francis showed us he could handle himself in the ring getting the win with a splash off the top rope on the Terrorist.  The crowd was jacked and could see many of them literally jumping up and down.

After the show was over they had a series of interviews in the empty arena with the majority of the wrestlers that were on the show.

Ray Stevens joined Trongard on commentary for the The Women's and World Heavyweight championship matches. 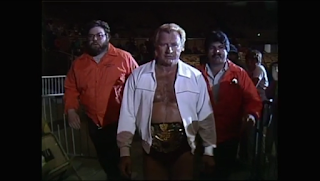 This would be the fourth and final reign for Bockwinkel as champion who held the AWA World Championship an impressive 2,990 days in total.

Kevin Kelly would go onto the WWE to be Nailz.

The Terrorist is Brian Knobbs and The Mercenary Ron Fuller

Russ Francis is the son of wrestling promoter Ed Francis.  He competed in the WrestleMania 2 battle royal and was one of the final four competitors.  He wrestled in the late 70's while playing in the NFL.