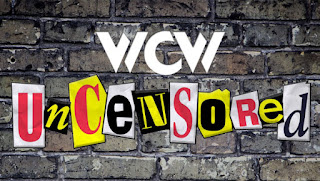 Here is tape #2. WCW Uncensored 1995. Keep in mind while reading this that they put this show over big time as having no rules and being unsanctioned. 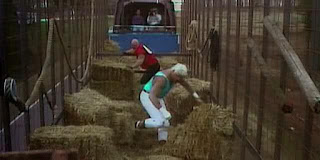 Match 1: The Blacktop Bully defeated Dustin Rhodes in a King of the Road Match. This was awful. Why was this even a thing let alone a thing that went about 10 minutes. It was a match inside of an 18 wheeler trailer that appeared to be designed to haul hay, that was going down the road. The object of of this match was to sound a horn that was mounted on top of the trailer. They had a really hard time standing up since the truck was going down the road and taking turns. 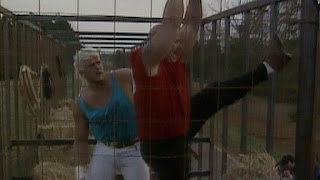 This is the match that got both Dustin Rhodes and The Blacktop Bully fired from WCW because the violated the no blading policy that WCW had.
1.5/10

Match 2: Meng w/Colonel Robert Parker defeated Jim Duggan in a Martial Arts match with Sonny Onoo as Special Referee. Well the first match was awful so why not continue with that trend. I guess I don't understand what the rules of a martial arts match are because this was just like a normal except the referee had on a karate gee. This was really boring with a ton of rest holds and Duggan being his usual dumbass self. The end came when Robert Parker distracted Duggan allowing Meng to hit a superkick for the win.
2/10

Match 3: Johnny B Badd w/Roc Finnegan defeated Arn Anderson w/Colonel Robert Parker in a Boxer vs. Wrestler Match. The rules were that Johnny B Badd had to wear boxing gloves and could only win by knockout. Anderson being the wrestler could win by pin or submission. The match was scheduled for 10 3 minute rounds with a 1 minute rest period between rounds. 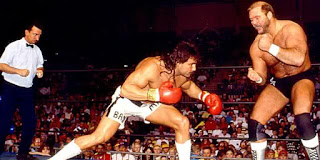 For the first 2 rounds Anderson got annihilated so he just attacked Badd during the rest period before round 2. Anderson had the advantage for round 3. During the rest period after round 3, Roc Finnegan cut off the glove on Badd's left hand, allowing him to take it off and knockout Anderson with a taped fist.
5.5/10

Match 4: Randy Savage defeated Avalanche by DQ. Yes thats right Savage won by DQ on a show that has no rules. This was a solid match until the finish. It had a good story and solid action. The end came when Ric Flair dressed in drag came out of the crowd and attacked Savage. Flair and Avalanche double teamed Savage until Hulk Hogan came out to make the save.
6/10

Match 5: Big Bubba Rogers defeated Sting. This match was kinda average. It was great but it didn't suck. Sting had his leg worked on for most of the match. The end came when Sting tried to slam Rogers but couldn't because of his knee. Rogers fell on him and got the pin. What a terrible finish.
5/10

Match 6: The Nasty Boys (Brian Knobbs and Jerry Sags) defeated Harlem Heat (Stevie Ray and Booker T) w/Sister Sherri in a Falls Count Anywhere match. This was one of the worst brawls I have ever seen. The brawled to the concession stands and basically had a food fight. There was so much shit on the floor that nobody could stand up. It was basically a 2 on 3 match because Sherri was involved almost the entire time. The finish was terrible just like the rest of the match. They didn't even get it on camera. It had to be shown on the replay. Knobbs slammed Booker on pieces of a funnel cake stand and got the pin. Terrible.
3/10

Match 7: Hulk Hogan w/The Renegade defeated Vader w/Ric Flair in a Strap match. This was awful. I have never seen a good strap match and this one didn't break that streak. First off there was not referee which right off the bat said this was gonna be a cluster. The Renegade is an idiot with absolutely no talent just like the guy he was impersonating. Flair still had on mascara from earlier in the night. This isn't starting well. Hogan dominated the first few minutes. About 5 minutes in Jimmy Hart comes to ringside with his clothes torn to pieces. 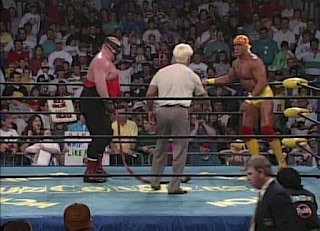 He had apparently been held hostage backstage. Then a few minutes later a masked man came out and attacked The Renegade with a wooden chair, then he suddenly disappeared. Flair then got another wooden chair from his secret stash he had at ringside and attacked Hogan. This allowed Vader to drag Hogan around to 3 corners. Flair then put the wooden chair under Hogan and told Vader to splash him off the ropes. Vader went for a somersault but missed and wrecked himself on the chair. Flair dragged Vader to the outside. Hogan then puts the strap on Flair and drags him around to all for corners for the win even though Flair wasn't even in the match. Vader then comes back in and attacks Hogan until Renegade comes in with yet another wooden chair. This brings out another masked man. Arn Anderson comes out tied up in the masked man suit. Randy Savage then unmasks as the other masked man. The faces then celebrate in the ring. The crowd was freaking out for Savage. This was terrible. Why anybody thought this was a good idea blows my mind.
3.75/10

This show sucked. The best match was slightly above average and had a terrible ending. This was really bad and should be avoided unless your obsessed with wrestling like myself.