I recently was looking through the vault section of WWE Network in the AWA and found four of their supershows, including the only AWA PPV just listed in the TV section.  The shows are this one here, Super Sunday and Superclash II & III. 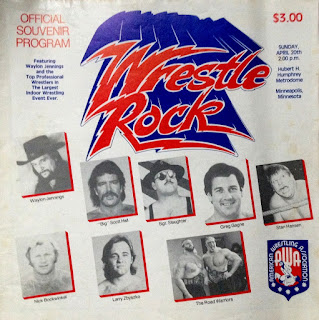 At the beginning of the show there were so many empty seats on the floor and in the stands, it did fill in by the end of the show.  It was interesting that Rod Trongard called the first eight matches by himself before Larry Nelson joined him.  The faces and heels came from separate sides of the ring.  Also there were several guest ring announcers in the evening.

Brad Rheingans vs. Boris Zhukov with Skandor Akbar
1 Fall 15 minute time limit
American Olympian vs. Evil Soviet Communist to a hilt.  Rheingans gets an interview on the way to the ring.  Rheingans took a beating for the majority of the match before making his comeback with a powerslam for the pinfall.  8 min 31 seconds.  Decent very formulaic for that time frame.

Midget Tag Team Match
Lord Littlebrook & Little Tokyo vs. Little Mr. T & Cowboy Lang
1 Fall 15 minute time limit
At the beginning of the match Trongard busted out this gem "Big or small short or tall the AWA has it all" and later "Coast to coast and border to border we go all over."  Not going to lie, I love it!
Not your typical comedy filled spotfest.  This match was actually a physical seriously contended match with what I would call only one comedy spot.  Lang and Mr. T got the win when Lang pinned Littlebrook with a scissor roll.  10 min 1 second.

Wahoo McDaniel vs. Col. Debeers
1 Fall 15 minute time limit
Short match, basically punch, kick, and chops with Wahoo getting disqualified for throwing DeBeers out over the top rope.  Post match McDaniels and DeBeers had a better match/fight on the floor before officials separated them.

Tiger Mask vs. "Rock n' Roll" Buck Zumhofe
1 Fall 15 minute time limt
Pre-match promo with Zumhofe while Tiger Mask made his entrance.  There was so much feedback you couldn't understand Zumhofe.  Mitsuharu Misawa was under the hood as Tiger Mask in thsi match.  This was no Dynamite Kid classic, in fact Zumhofe was outclassed by Tiger Mask who seemed not impressed to be there.  Tiger Mask gets the win when he does a front flip off the top rope and crashes into a standing Zumhofe. 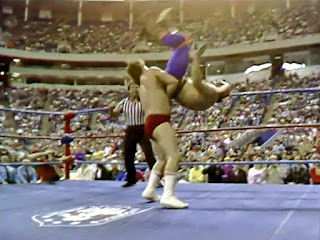 Mike Rotundo & Barry Windham vs. The Fabulous Ones: Stan Lane & Steve Keirn
I was never a fan of the Fabulous Ones, I always preferred Lane in the Midnight Express.  Really great tag team match with four guys that really know what they are doing.  Lane had Rotundo set up for a piledriver when Windham came off the top rope with a elbow to the back of the had and scored the three count.  Classic 80's good guy doing what the bad guy does and getting cheered for it. 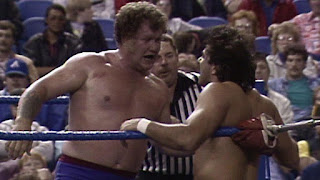 Harley Race vs. Rick Martel
1 Fall 20 minute time limit
Interview with Race on the way the ring. I've never seen these two wrestle each other before.  This match started a bit slow but after a few minutes they turned it on and just went for it battling to a double count-out.  I'm not even angry about it, it was truly a fantastic match!  After the match they kept at it on the floor until it was broken up by officials.

The only lady in match I had never heard of was Despina Montagas and I was very impressed with her in the match especially her strength.

Sgt. Slaughter vs. Kamala the Ugandan Giant with Skandor Akbar
Slaughter is in GI Joe ring gear.  Bad match, fans were popping big time for Slaughter though, who won by disqualification when Akbar interfered.  Larry Nelson conducted a post match promo with Sgt. Slaughter, he gathered up a few kids to say the pledge of allegiance.

AWA Tag Team Championship
Champions: "Big" Scott Hall & Curt Hennig vs. The Long Riders: "Wild" Bill & Scott "Hog" Irwin
1 Fall 60 minute time limit
Hall is awarded a trophy from Pro Wrestling Report for being voted Most Popular Wrestler.  This match wasn't very good at all.  For some reason Hennig and Wild Bill were in the match 95% of the time.  Hennig pinned Wild Bill with a missile dropkick. 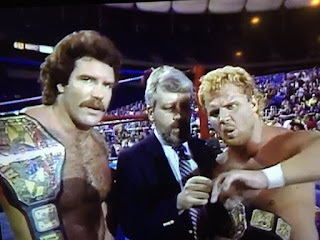 Larry Nelson conducted a post match promo with the champs.

European Rules Match
Scott LeDoux vs. Larry Zbyszko with Go the Ninja
10 two minute rounds with 1 minute rest breaks
Ken Resnick conducted a pre-match promo with Ledoux.  Special Referee Larry "The Axe" Hennig.  This match was basically a hot mess.  Both men wore four ounce karate gloves, but it was never made clear how you can win the match.  At the end of the first round the bell rang and Larry Nelson asked what that bell was all about.  Midway through the second round Trongard said this could end many ways.  It was basically punches, kicks, and take downs with then awkward ground grappling.  At the beginning of the 5th round Zbyszko throws LeDoux to the floor and posts him drawing the disqualification.  Larry Nelson conducted a post match interview with LeDoux.

AWA World Champion: Stan "The Lariat" Hansen vs. Nick Bockwinkel
1 Fall with a 60 minute time limit
On his way to the ring Hansen beat up Larry Nelson.  As you can imagine this was a wild and crazy Hansen style brawl.  I've never seen Bockwinkel in a match like this before, he didn't have a choice though, it was survival!  Also the perennial heel Bockwinkel was getting baby face reactions.  After several minutes of these guys beating the tar out of each other we get a ref bump and Bockwinkel gets several pin falls that the ref doesn't see. 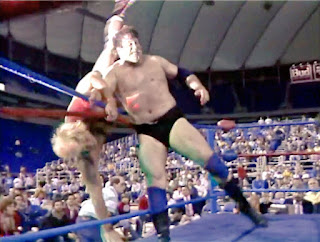 Of course he comes too in time to see Hansen back body drop Bockwinkel over the top rope drawing the disqualification and giving Bockwinkel the win and Hansen retaining the title.  Of course after the match they keep fighting.  10 minutes 8 seconds, felt longer, in a good way.  Larry Nelson conducted a post-match interview with Bockwinkel.

Main Event Steel Cage
Greag Gagne & "Superfly" Jimmy Snuka w/ Verne Gagne vs. King Kong Brody & The Barbarian w/ Shiek Adnan Al-Kaissie
1 Fall to a finish no time limit
If Greg & Snuka win Verne gets Al-Kaissie in the cage for 10 minutes.  This was contested under standard tag team rules, just in a cage.  Brody wasn't the typical wildman that we are used to.  Gagne and Brody got busted open well, Barbarian just has a cat scratch,  Oh my god, the pin fall came when Gagne was down on all fours, Barbarian and Snuka were both standing with Barbarian holding Snuka open for a shot from Brody who threw a dropkick knocking Barbarian backwards over Gagne tripping Barbarian and Snuka falling onto him for the pin...seriously.

All four men battle to the back and Vern grabs Al-Kaissie ramming him into the cage twice before throwing him in the ring where Al-Kaissie was bleeding profusely.   This wasn't your typical "10 minutes in the ring" this was a match! So yes Verne actually Main Evented the card.  Verne gets the pin with a small package. 3 minutes 49 seconds.  Larry Nelson conducted a post match interview with Verne who stated that, that was his last match.  Verne would wrestle three more matches after this before ending his in ring career.

Steel Cage
The Road Warriors: Hawk & Animal vs. The Fabulous Freebirds: Michael PS Hayes & "Gorgeous" Jimmy Garvin
In the first minutes Hayes eats the cage and is busted open.  Standard match with the Warriors dominating and getting a quick win after a few minutes when Hayes accidentally hit Garvin with a foreign object and Animal getting the pin on Garvin.  7 minutes 18 seconds. 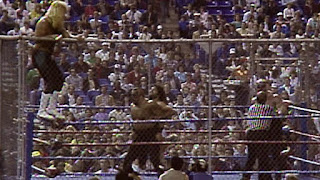 Even though the previous match was announced at the Main Event the Warrior vs. Freebirds was the last match on the tape.  Checking a couple websites also shows that this match happened prior to Gagne & Snuka vs. Brody & Barbarian.

Also checking those same websites show that a match on the card appears to have been cut from this broadcast on the WWE Network.  The Rocker vs. Playboy Buddy Rose & Doug Somers.  Now before any says anything here is a video capture I found on the internet of the match with the WWE logo on the screen. 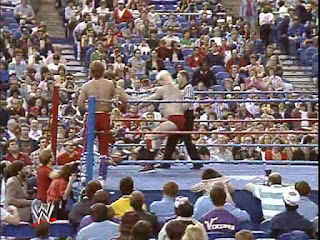 I wonder why it was cut.

Also cut from this version, and I'm not upset about it, was a concert performed by Waylon Jennings, to which I question about Waylon Jennings qualifies as rock music

This would be the last dome show for the AWA with an announced recorded attendance of 23,300 but inside the 65 thousand seat dome it looked sparse.  If I didn't list the time limit it was because it wasn't mentioned same with the time of the match.

Rod Trongard just has one of those amazing voices that I just love from wrestling's past.

I've never seen this show before and was surprised to see some guys on the show like Giant Baba, Rotundo and Windham.

Later Readers!
Posted by Michael J. Labbe at 2:38 AM