Here are the the results from Risk it for the Bisquit in Westbrook last night: 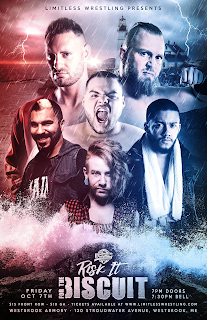 Match 1: Anthony Greene defeated Tyler Nitro w/Mike Campbell. Good solid match and good choice to open up the show. Greene is super over and for good reason. Nitro is becoming a good addition to the roster.
7/10

Match 2: Scott Slade defeated Flex Rumblecrunch and Mikey Webb in a Triple Threat Match. Solid match but nothing really special. This was kinda what you would expect from these guys. Webb played a good heel. He would make a great addition to the roster.
6.75/10

Match 3: Xavier Bell defeated Danny Miles.  Bell has enough charisma for the 2 of them. They beat the hell out of each other in this one. Bell was supposed to get the win with a sitout powerbomb but Barry botched the count. They did a few more spots and Bell won after a piledriver.
7.75/10

Match 4: JT Dunn and Mike Graca defeated The Maine State Posse (Danger Kid and Aidan Aggro). Good tag match. MSP really stepped it up in this one and showed they can hang with some of the best in New England. I was surprised how well Dunn and Graca worked together since I've never heard of them teaming before. MSP has taken over the roll as top tag team in Limitless Wrestling.
8/10

Match 5: Nick McKenna defeated Geno Bauer, Owen Brody and Adam Booker in a Fatal 4 Way. Solid match but nothing really special. McKenna was super over. Aside from a few dives to the outside, not really much to talk about.
5/10

Match 6: Ace Romero defeated Anthony Gangone. This was the best performance I've seen from Gangone. He beat up Ace for most of the match and busted open Ace's nose. Lots of good solid action in this one.
7.5/10

Match 7: Tommy Mack defeated Sully Banger. This was basically a squash with Banger getting the shit kicked out of him.
3.75/10

Match 8: The Tenacious Two (Johnny Torres and Scott Wild) defeated Jeremy Leary and Skylar. Awesome match. This was way better than expected. Skylar took a massive beating like a champ. Wild beat the ever loving piss out of her. The crowd was super into this one. Check this out.
8.75/10

Match 9: Brian Fury defeated Donovan Dijak. Good match but not nearly as good as their first match at Americanrana 2015. Its to bad the match before this killed the crowd because this match deserved way more from the crowd than it got. It started kinda slow but they were beating the shit out of each other after about 5 minutes. Just a really good solid match.
8/10

A good show and a great turnout for only having promoted it for 10 days. Matches 7 and 8 should have been swapped. That would have avoided the crowd being killed for the main event.