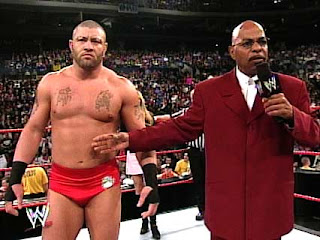 Back in the spring of 2003 Rodney Mack made his TV debut for the WWE managed by Theodore Long.  Long's character at the time was about the black man being held down by the white man so he started the short lived Theodore Long 5 Minute White Boy Challenge.  Initially Mack faced enhancement talent in the first three outings, then mid-carders Spike & Bubba Ray Dudley before ultimately being defeated in less than 30 seconds by Goldberg and officially ending the gimmick.

Long would join The Coach and Jerry "The King" Lawler on commentary where he would continue his black man being held down by the white man propaganda.

April 28, 2003 Boston, MA
defeated unknown at 1:58
During this match on commentary Long told The Coach he was the only black man he knew who had a calendar with out the month of February on it.  February is Black History Month.  Mack's opponent was never mentioned by name.

May 12, 2003 Philadelphia, PA
defeated Mike & Ken Phoenix in a double challenge
Ken Phoenix would go on to become Kenny of the Spirit Squad.  This night was also the night that the Legion of Doom made a surprise one night return wrestling Tag Team Champions: RVD & Kane

May 19, 2003 Greenville, SC
defeated Spike Dudley by submission with the Black Out cobra clutch at 4:59
This was also the night that Triple H wrestled Ric Flair in the main event and post show they had an impromptu celebration for Flair.

May 26, 2003 Mobile, AL
defeated Bubba Ray Dudley by submission with the Black Out cobra clutch at 2:30

June 9, 2003 Miami, FL
defeated D-Von Dudley by submission with the Black Out cobra clutch at 4:14, this was never officially called a Five Minute White Boy Challenge even though he won the match in less than five minutes.  No reason was given as to why it wasn't.

June 23, 2003 Madison Square Garden
was defeated by Goldberg with the jackhammer in 26 seconds
This was the only Open Challenge Five Minute White Boy Challenge.  Mack tried to attack Goldberg in his pyro and failed.  The Garden was absolutely crazy for Goldberg.

This was the final Five Minute White Boy Challenge, I'm not sure why the concept was dropped as Long's character did not change after and he continued managing Mack.  Possibly because Mack was no longer undefeated.