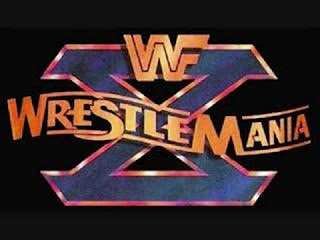 Match 1: Owen Hart defeated Bret Hart. Very good match. One of the best opening matches in Wrestlemania history. Very good technical match and a great story to it. The Hart family feud is one of my favorite storylines in wrestling history.
8.75/10

Match 3: Randy Savage defeated Crush w/Mr. Fuji in a Falls Count Anywhere Match. The rules to this one were awful. They could battle anywhere and pins counted anywhere, but when someone was pinned they had 60 seconds to get back into the ring or they lost, not when they were pinned. Despite these terrible rules it wasn't a horrible match. It would have been way better had they used the normal Falls Count Anywhere rules. This was Savage's last match in WWE.
6/10

Match 4: Women's Champion Alundra Blayze defeated Leilani Kai. Kai was way past her prime and Blayze had only about 3 moves. This was pretty bad.
2/10

Match 5: Men on a Mission (Mo and Mabel) w/Oscar defeated Tag Team Champions The Quebecers (Jacques and Pierre) w/Johnny Polo by Count-Out. This match kinda sucked because MOM is terrible. Plus the count out finish on the biggest PPV of the year didn't help out either.
3.75/10

Match 6: WWF Champion Yokozuna w/Mr. Fuji and Jim Cornette defeated Lex Luger with Mr. Perfect as special referee to retain. This was a pretty good match. I've always thought that Luger and Yoko had good matches with a really good story just for some reason the finish always ruins it. It kinda sucks that Perfect's back got re injured because the finish of this one was a good set up for a feud between him and Luger.
7/10

Match 9: Intercontinental Champion Razor Ramon defeated Shawn Michaels w/Diesel in a Ladder Match to retain. This was absolutely crazy for 1994. Way ahead of its time. These guys killed it and deserved to win match of the year.
10/10

Match 10: Bret Hart defeated WWF Champion Yokozuna w/Mr. Fuji and Jim Cornette to win the WWF Championship. Solid match but nothing really special. It was kinda what you would expect from these two. The finished really sucked. Yoko falling off the 2nd rope when going for the banzai drop and losing, awful.
6.75/10

This show is memorable for 2 reasons, the ladder match and Bret vs. Owen. The 2 Yoko matches would have been way better if the finishes didn't suck. Why did he always have bad finishes as champion?

Match 1: The Allied Powers (Lex Luger and The British Bulldog) defeated Jacob and Eli Blu w/Uncle Zebekiah. This match sucked. The only time the Harris Brothers were even remotely good was in ECW. Luger and Bulldog were a bad team. Mostly because Luger was terrible.
3.5/10

Match 2: Razor Ramon w/1-2-3 Kid defeated Intercontinental Champion Jeff Jarrett w/The Roadie by DQ. A DQ finish at Wrestlemania is terrible, especially in a title match. Aside from that this was a solid match as these 2 always had. The DQ came when Razor had Jarrett up in the Razor's Edge and The Roadie came in and clipped his knee.
7/10

Match 3: The Undertaker w/Paul Bearer defeated King Kong Bundy w/Ted Dibiase. This match was awful because Bundy is awful. Dibiase had the urn at the beginning of the match. Taker got it back but Kama came out and stole it back.
3.5/10

Match 4: Owen Hart and Yokozuna w/Mr. Fuji and Jim Cornette defeated Tag Team Champions The Smoking Gunns (Billy and Bart) to win the titles. Yoko was Owen's mystery partner. This was a solid match and a great moment for Owen. I kinda wanted to see this match go a few more minutes.
6.5/10

Match 5: Bret Hart defeated Bob Backlund in an I Quit match with Roddy Piper as special referee. This was awful. About every 15-20 seconds, Piper was jamming the microphone in someones face, asking "Waddya Say?" If Piper had stayed out of it, it may have been better but the wrestling was bad too. The finish sucked to because Backlund didn't even say I Quit. He said Yeah instead.
3/10

Match 6: WWF Champion Diesel w/Pamela Anderson defeated Shawn Michaels w/Sycho Sid and Jenny McCarthy to retain. This was a good match but not nearly as good as many people say. I don't think it should have been Match of the Year. It was a good match up until the ending. The finish was super rushed.
7.5/10

Match 7: Lawrence Taylor w/The All-Pro Team defeated Bam Bam Bigelow w/The Million Dollar Corporation. The 2 teams got into a brawl before the match even started. Taylor did okay but had a super limited moveset. This match was watchable but not really anything more. It wasn't the worst match on the card and it had a guy who was making his wrestling debut.
5/10

This is one of the worst Wrestlemanias. There really isn't a match that is worth getting excited for. Bret Hart had a terrible match and Shawn Michaels' match was good but not great.