A very unique show presented by the NEPWA where most of the matches on the card featured new students taking on veteran students of the academy.  The show is a single camera shot that appears to swivel.  The picture quality is really good and I watched this on my Kindle Fire 7 tablet.

My only complaint is in part one you can barely hear the ring announcer or the entrance music, if there was any.  The commentator Justin Shape you can hear loud and clear!  In the part two, the the camera changes the pictures is great, but you can't hear Shape too well, you can everything else.

Forgive me if I got any of the names spelling incorrect, send me a message and I will correct it.  Let's get to the action!

Christian Cassanova vs. Patrick Williams
In just his second match Williams put on a great performance giving Cassanova  a run for his money.  Cassanova got the win with what looked like a scissors kick in just over 8 minutes.  I've seen Cassanova before, I really like his Michael Jackson gimmick and he has really improved over the last few years into a a very solid competitor.

Just Ike vs. Marcos Santiago
I haven't heard of Ike, this is Santiago's first ever match.  At under 2.5 minutes from bell to bell it's hard to really judge either man.  Ike is very odd in his wrestling style, crawling under the ring and biting his opponent on his posterior was the highlight of the match.

Donovan Dijak vs. Bryce Clayton
Dijak jumps the gun with a boot to the face before the bell and beating him down in the corner.  Clayton quickly takes over with a stiff clothesline and a two count.  Dijak takes over eventually taking the action to the floor.  Dijak remains in control back in the ring getting a two count with a vertical suplex throw.  Clayton fires back but Dijak catches him and after back breaker he is just thrown across the ring for a two count. Clayton reversed a choke slam into a spine buster then two high knees into the corners.  Clayton dropkicks Dijak to the floor, then drops and elbow off the apron.  Back in the ring Clayton delivers a top rope clothesline for a two count. 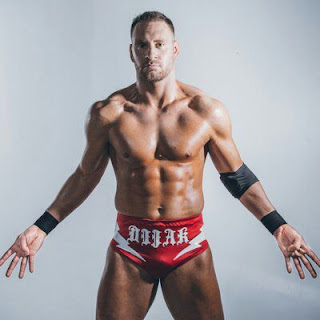 Dijak comes back with a chokeslam into a backbreaker following it up with a moonsault press for a two count.  Clayton catches Dijak coming off the ropes for a powerslam for two.  I cringed on the powerslam, thought Dijak was going to get dumped on his head.  Dijak goes for Feast Your Eyes but it is reversed into a school boy for two.  Clayton goes the top, but Dijak stops him nailing Feast Your Eyes for the pin at the 11:09 mark.
I was very impressed with Clayton in this match.  I hope to see him live in the future,

Mason Sims vs. Robo The Punjabi Lion
Both of these guys are making their debut, and 34 seconds into the match the Punjabi lion gets the pin with a unique finish that looks like a vertical suplex but ends as an uranage

Robo The Punjabi Lion vs. Kid Courageous
After making short work of Sims Robo issues and open challenged accepted by Courageous, also making his wrestling debut.  Lasting 71 seconds Robo picks up his second win of the night with a death valley driver,

Robo The Punjabi Lion vs Brick Mastone
In a second open challenge Brick Mastone answers the call.  Mastone gives Robo more than he can handle and after an inside out spear Robo walks away taking the count out.  Mastone with the win in 2.5 minutes.

"All Good" Anthony Greene vs. Leon Lozano
This is Lozano's first ever match.  The exchange shoulder blocks running the ropes until Greene pulls a side headlock to the mat.  Greene lights Lozano up with a series of chops that leads to a two count.  The men exchange control of the bout until Green clotheslines Lozano to the floor and catches with a dive onto the floor.  Back in the ring Green retains control a cross body block off the top rope is good for a two count.  Lozano sends Greene to the floor slamming his arm onto the ring apron.  Back in the ring Lozano nails a picture perfect hammerlock slam.  They trade control back and forth but Lozano keeps going back to the left arm of AG. 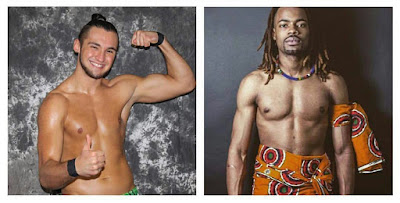 AG fires back luring Lozano into the corner superkicking him and then getting a two count after  a 450 splash!  Lozano battles back reversing an Irish whip out of the corner into a Samoan drop for a two count.  Greene gets Lozano in the corner and delivers a running boot to the face.  He goes for a second and Lozano pulls referee Kevin Quinn in front of him but AG manages to stop in time.  Pushing Quinn out of the corner Lozano nails Greene with a low blow then school boys him getting the three count with a handful of tights at 12:20.
Great match, once again very impressed with another NEPWA rookie in Lozano.  Another guy I'd like to see more of.

Travis "Flip" Gordon & Bret Viginamino vs. Cam Zigami & Liam Christopher
I'm sure I butchered Bret's last name.  A really great tag team match.  Bret and Flip utilized some great double team maneuvers before Bret took on the Ricky Morton role getting beat down an unable to make the tag to Gordon.  Once he makes the tag Flip comes in a house on fire taking about both Zigami and Christopher.
Flip has Liam prone in the ring going to the top, Zigami crotches Flip and he and Liam attempt a double superplex that is reversed into a double powerbomb pinning combo for a two count.  Bret evens the odds sending Zigami to the floor then taking him out with a running penalty kick.  Flip sets up Liam and nails I believe  Phoenix splash for the three count.  Not sure exact time of the match, I'm thinking it was a good 15 minutes.

Mickey Webb vs. Josh Briggs
This is Briggs third match.  He's a big guy, looks like a wrestler probably shouldn't be stepping over the top rope to enter the ring when he's barely touching with his toes, has the opposite effect of making someone look big.

This match started slow and methodical but really picked up the last few minutes with the action going crazy including one of the best crucifix drop pin attempts I have ever seen.  Briggs gets the win when he catches Webb  with a choke slam coming off the top rope at 15:27.

The New England Pro Wrestling Academy must be doing something right because if I had seen any of these guys on any other Indy show I would be able to tell that they were green but not this this was their initial matches.

I look forward to seeing several of them again, specifically Bryce Clayton and Leon Lozano.

Later Readers!
Posted by Michael J. Labbe at 4:49 AM