I recently was looking through the vault section of WWE Network in the AWA and found four of their supershows, including the only AWA PPV just listed in the TV section.  The shows are this one here, WrestleRock 86 and Superclash II & III.

Brad Rheigans vs. Rocky Stone
1 Fall 20 minute time limit
As with most off all of Rheigans matches that I have seen, it's very formulaic.  They trade control of the match, Rheigans takes the heat for a while, makes his comeback and gets the win.  This time with a gutwrench suplex.  9 minutes 34 seconds.  Post match in ring interview with Gene Okerlund.

"Mr. Electricy" Steve Regal vs. "Rock N' Roll" Buck Zumhofe
1 Fall 20 minute time limit
Decent match, started out pretty standard then picked up at the end with Zumhofe getting the win after a body slam and a vader bomb. 11 minutes 5 seconds Post match in ring interview with Gene Okerlund.  The primary focus of the match for the commentators and post match interview was about Zumhofe's upcoming Junior Heavyweight title match in May with Mike Graham.

Jerry "The King" Lawler vs. "Golden Greek" John Tolos
1 Fall 20 minute time limit
Lawler was very over with the crowd. Tolos jumps him before the bell and it's pretty much non-stop action.  At one point it looked like Tolos was disqualified for throwing Lawler over the top rope.  The bell even rang, but the referee waved it off.  Lawler came back in the ring, dropped the strap, fist drop, and a minute later a piledriver for a three count. 8 minutes 24 seconds. 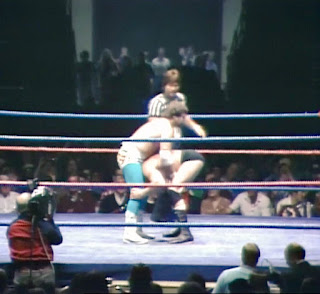 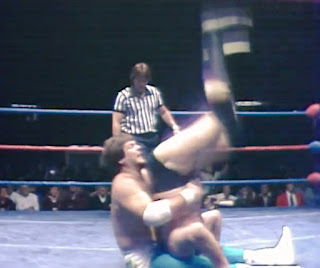 For those that don't know John Tolos played Mr. Perfect's manager Coach in the WWE.  I had never seen him in the ring before that I can recall.  He was 53 at the time of this match and looked good in the ring.

NWA Women's Tag Team Champions: Texas Cowgirls: Wendi Richter & Joyce Grable vs Judy Martin & Velvet McIntyre
1 Fall 45 Minute time limit
No comedy match here, straight up wrestling with 4 ladies who could go in the ring.  I don't think Velvet McIntyre gets the credit that she deserves for just how good she was in the ring.  Two very tough ladies in the match in Grable and Martin. 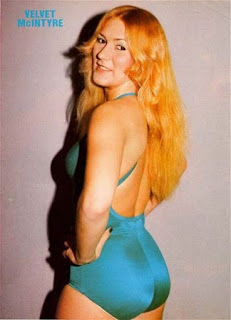 Really good match with a lot of quick tags and great offense by both teams.  After 15 minutes and 28 seconds the Cowgirls retain the titles with their finish.  Velvet comes off the ropes and Wendi back body drops her onto Grable who powerbombs McIntyre then getting the pin.  Post match interview with the Texas Cowgirls with Gene Okerlund

Wahoo McDaniel vs. "Dizzy" Ed Boulder
1 Fall 20 Minute time limt
Boulder is a blond haired mustached Brutus Beefcake.  Wahoo basically beat the crap out of Boulder who wasn't selling very much for McDaniel. Awkward moment in the match was when Boulder was doing the classic choke your opponent with your shin but the referee wasn't recognizing it and just attempted to count Wahoo's shoulders down three times.
Terrible match the mercifully came to end with a chop and then elbow drop at 9 minutes 4 seconds.

Six Man Tag Team Match
High Flyers: Greg Gagne & Jim Brunzell and Rick Martel vs. The Heenan Family: Ken Patera, Jesse Ventura, & Black Jack Lanza
Martel and Patera started the match.  Long match, lots of tags, no one really holding the upper hand for any length of time, the match broke down several times with everyone coming in the ring, then calming down again, and breaking apart.  I've never seen so many tags behind the referee's back that the referee forced the guy to leave the ring before.  The match breaks down again with all competitors in the ring when Patera gets the pin on Brunzell at 17 minutes and 3 seconds.  The faces beat up the heels after sending them running. Okerlund then interviews the losing team in the ring.  Brunzell claims Patera used a foreign object to gain the win.

World Heavyweight Champion: Nick Bowckwinkel w/ Bobby "The Brain" Heenan vs. Hulk Hogan
1 Fall 60 minute time limit special referee Lord James Blears
Huge reaction for Hogan. He was in great shape, wicked cut and not all bloated like his WWE run.  Super slow paced match but the crowd didn't seem to care.  The popped for Hogan when he was on offense and chanted "Hulk" when Bockwinkel had the upper hand.  Botch false finish where Blears just stopped counting after 2 before Bockwinkel kicked out. 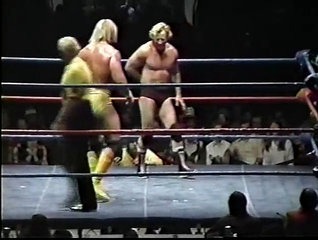 After near 20 minutes of plodding action we get a ref bumped when Bockwinkel had the sleeper on Hogan and Hogan flips him off his back onto Blears.  Then a second ref bumped when Bockwinkel has the sleeper on Hogan and Hogan backs him into corner crushing Blears.  Then Hogan accidentally sends Bockwinkel out over the top rope, he brings him back in with a suplex, leg drop of doom 1-2-3 new champ!  The crowd went nuts!  Okerlund even announces Hogan as Champion. 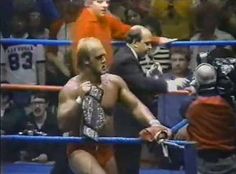 Verne Gagne then made the biggest mistake and what I think was the beginning of the end of the AWA when right after that President Stanley Blackburn reverses the decision disqualifying Hogan.  The crowd started chanting bullshit and throwing debris in the ring.  Hogan then beat up Bockwinkel and Heenan up to save a riot.

I wonder what would have happened if Verne would have run with Hogan as champion.  Would the AWA still be around, because clearly he could have carried the company like he did the WWF. 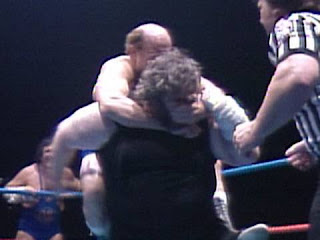 To his credit Verne was incredible over and it didn't matter to the crowd everything he did the crowd loved.