Roy's Review: WWF No Way Out of Texas

Match 1: The Headbangers (Mosh and Thrasher) defeated Marc Mero and Goldust w/Luna Vachon. Solid match but nothing great. Sable was sent to the back by Mero before the match started. Thrasher got his head busted open on the ring steps. Sable came back out near the end causing a distraction which allowed The Headbangers to switch places and get the win. Afterwards Sable and Luna got into a fight.
5.75/10 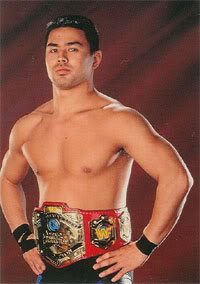 Match 2: Light Heavyweight Champion Taka Michinoku defeated Pantera to retain. Solid match but again nothing great. Sunny was special ring announcer for this one. Some good high spots. Brian Christopher was on commentary which made for some good one liners from him and Lawler. After the match Lawler and Christopher tried to attack Taka but he took them out with a cross body off the top.
6.25/10

Match 3: The Quebecers (Jacques and Pierre) defeated The Godwinns (Henry and Phineas). Awful. Jacques did have a sweet bald spot though.
2/10 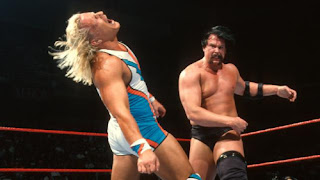 Match 4: Bradshaw defeated NWA North American Champion Jeff Jarrett w/Jim Cornette by DQ. This was a decent match. Jarrett came to the ring with Barry Windham and The Rock N' Roll Express but they were sent to the back because they didn't have a "manager's license." Jarrett worked over Bradshaw's leg for most of the match. Near the end Cornette got involved and was bodyslammed for his trouble. This allowed Jarrett to get the tennis racket and hit Bradshaw causing the DQ. After the match Windham, Morton and Gibson came out and beat up Bradshaw until The Legion of Doom made the save.
6.5/10

Match 5: Ken Shamrock, Ahmed Johnson, Chainz, Skull and 8-Ball defeated The Nation of Domination (Faarooq, The Rock, Kama, Mark Henry and D'Lo Brown) in a War of Attrition Match. This was a surprisingly good match, mainly because the dumpy guys only had minimal ring time. D'Lo did the majority of the work for the Nation.
7/10

Match 6: Kane w/Paul Bearer defeated Vader. This seemed like it was the first real test for Kane. Vader did well considering how strong Kane was booked at the time. As for the match, it was kinda boring because it was just a bunch of moves. Kane won with a tombstone. After the match he hit Vader in the head with a huge wrench.
5.75/10 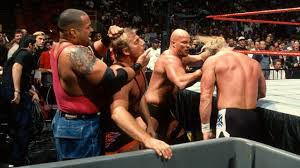 Match 7: Steve Austin, Cactus Jack, Chainsaw Charlie and Owen Hart defeated Triple H, Billy Gunn, Road Dogg and Savio Vega w/Chyna in a Non-Sanction Match. Savio was the mystery replacement for Shawn Michaels. What a letdown. This was a crazy brawl with tons of weapons and everyone taking a bunch of damage. After about 5-7 minutes it settled into a typical tag match, just with weapons. Funk took quite a beating as did Foley. Austin got the hot tag, cleaned house, then hit a stunner on Road Dogg for the win. After the match Chyna shoved Austin multiple times, then flipped him off. She received a stunner for her trouble. If you haven't seen this match before check it out. Its a good fun brawl.
8.25/10

There were a couple dumpy matches but overall a decent show.

Later Readers!
Posted by Michael J. Labbe at 3:40 AM