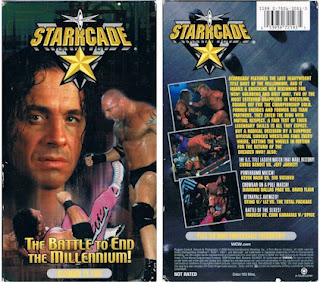 Match 1: The Mamalukes (Big Vito and Johnny the Bull) w/Tony Marinara defeated Disco Inferno and Lash LeRoux. This was a solid match and a decent opener. All 4 of these guys were super underrated in WCW. The story was that Disco owed Tony Marinara's dad a bunch of money and The Mamalukes were the goons that were sent to collect it but had failed a bunch of times. After the match they put Disco in a body bag, carried him to the back and threw him in the trunk of a car.
6/10

Match 2: Madusa defeated Crusierweight Champion Evan Karagias w/Spice to win the title. It wasn't blatantly obvious that WCW was copying WWF by putting a men's title on a women. Despite Madusa being awful, this was a solid 3:30 match. Madusa actually took a bunch of hard bumps. Spice turned on Karagias, costing him the title.
4.5/10

Match 3: Hardcore Champion Norman Smiley defeated Meng to retain. Meng met Smiley right at the entryway and they battled to the back. Brian Knobbs and Fit Finlay got involved, attacking Meng. They beat him down and let. Then Smiley came out from under a table to get the win.
3.5/10.

Match 4: The Revolution (Shane Douglas, Dean Malenko, Perry Saturn and Asya) defeated Jim Duggan and The Varsity Club (Kevin Sullivan, Mike Rotunda and Rick Steiner). This was awful. The Varsity Club were Duggan's mystery partners. If Duggan lost he would have to denounce the USA the next night on Nitro. If Duggan won The Revolution would have to take over his janitor duties for a month. Duggan was fighting in his janitor's carhart suit. The Varisty Club turned on Duggan and beat him up allowing Douglas to leave commentary, where he spent the entire match, to get the pin.
2/10

Match 5: Vampiro w/The Misfits defeated Steve Williams by DQ. If Vampiro wins he gets 5 minutes alone in the ring with Oklahoma. Before the match, The Misfits had locked Oklahoma in a shark cage and brought it out to ringside. The DQ came when Williams attacked the referee.
1/10

Match 7: Creative Control (Ron and Don Harris) and Curt Hennig defeated Harlem Heat (Booker T and Stevie Ray) and Midnight. This was bad. Whichever team won either Harlem Heat or Creative Control would earn a tag title shot. Stevie Ray didn't come out until near the end and didn't help at all. This was the beginning of his 2nd turn on Booker. Midnight got the shit kicked out of her for a good portion of the match. Hennig hit Booker with a loaded fist allowing one of the Harris Bros to get the pin.
3/10

Match 8: Jeff Jarrett defeated Dustin Rhodes in a Bunkhouse match. This was a good brawl until Curt Hennig came out and got involved. They beat the hell out of each other. The end came when they battled up the entryway, Hennig distracted Rhodes, allowing Jarrett to hit him with a guitar for the win.
7/10

Match 10: Sting w/Elizabeth defeated Lex Luger. This was terrible. If Sting won Liz would be free of her contract with Luger. During the match Liz turned on Sting and went to spray mace in his eyes but Sting had foreseen the turn and switched her mace with silly string. Later on Sting was going for the Scorpion and Liz whaled him in the head, hard with his bat allowing Luger to get the win. After the match Luger put Sting forearm in a chair and repeatedly jumped on it.
3/10

Match 11: Kevin Nash defeated Sid Vicious in a Finisher Only Match. The first man to hit the powerbomb on the other was the winner. Sid worked Nash's back for most of the match. The referee got knocked down right before Sid hit the powerbomb. Jeff Jarrett then comes out and wrecks Sid with a guitar. Nash then tries for the powerbomb twice but can't do it due to the his injured back, so he just wakes up the referee and tells him he hit a powerbomb. Awful.
2/10

Match 12: United States Champion Chris Benoit defeated Jeff Jarrett in a Ladder Match. Good match here. It was supposed to be Scott Hall defending against Benoit but Hall injured his knee so the stripped him of the belt and gave it to Benoit. Benoit didn't want to win the title that way so he put out and open challenge. Insert Jarrett. These guys beat the hell out of each other and had a good 10 minute ladder match. Benoit even did a flying headbutt off the ladder.
8/10

Match 13: WCW Champion Bret Hart defeated Goldberg in a No DQ match to retain. This would have been a decent match if not for the shitty booking. First off there are no rope breaks in a No DQ match unless its WCW booked by Vince Russo. Secondly 3 referees were knocked down. What the hell is that. The end came when Roddy Piper came out to be referee #4 just as Bret was locking on the sharpshooter. All Piper did was call for the bell and declare Bret the winner. They were building a good story and Bret was doing as great working of Goldberg's leg but the horrible booking flushed all of that down the toilet.
6.75/10

Horrible, just horrible booking. I wanna get the Nitros and Thunders that lead up to this PPV to see just how bad those were too.

Later Readers!
Posted by Michael J. Labbe at 1:08 AM