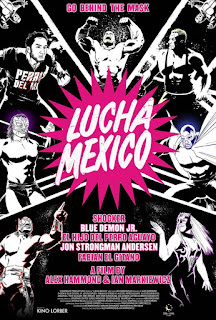 The other day I stumbled across a new documentary on Netflix called Lucha Mexico.  The Netflix synopsis was simple: The documentary captures the colorful spectacle of Lucha Libre, a form of Mexican pro wrestling performed by masked superheroes and villians.  SOLD!

The film was released in 2016 with a theatrical tour and is available on DVD.  It has a run time of 1 hour 43 minutes and although there is some English in the film it is primarily in Spanish, what do you expect its about pro wrestling in Mexico, so make sure you turn your subtitles on.

This documentary is the first that I am aware that really shows the depth of Lucha Libre with Shocker headlining shows for CMLL in the world famous Arena Mexico to tent shows at farmers markets in the rain.  We also get an abridged history of Lucha Libre with wrestlers talking about their fathers and older wrestlers talking about their time in the ring.  We get a peak at the CMLL training center at Arena Mexico.

The time frame of this movie is never specified however based on the matches and contents of the movie it was filmed over a five year period from Fall 2009 until Spring 2015.

Some incidents in the film that show the timeline are:

Fabian El Gitano was murdered in his home from blunt trauma to the head on March 18, 2011

Hector Garza passed away on May 26, 2013 from lung cancer.  At the time of his death he was the Mexican National Heavyweight Champion, the Mexico City Boxing and Wrestling Commission deemed the title inactive.  As of November 25, 2016 it remains inactive.

There are a lot of matches and clips featured in the film, but these are the ones that I could pinpoint down.  Also they are in order by date and not by appearance in the film. 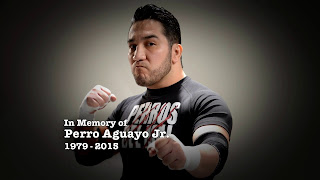 There are a bunch of matches that I recognized luchadores in that I couldn't find when and where they took place.

I really enjoyed this documentary, I have watched it twice.  I'd like to see them do another one focusing other luchadores and  luchadoras as they have barely scratched the surface of the rich history of Lucha Libre.

Arena Mexico is only place I someday dream to go and watch an event.  I doubt it will ever happen but to see realy lucha libre in Mexico would amazing.

Later Readers
Posted by Michael J. Labbe at 5:47 AM