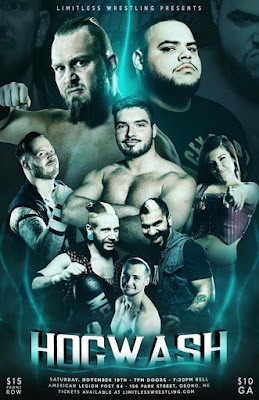 Here are the results from Hogwash last night:

Match 2: Cam Zagami and Tyler Nitro w/Mike Campbell defeated Da Hoodz (Kris Pyro and Davey Cash). Good match. It was kinda weird that Da Hoodz were face since they have always been heel in Maine. Zagami got the pin after he gave both Pyro and Cash low blows.
6.5/10

Match 3: Big Daddy Beluga defeated Davienne. Before the match Brick Mastone came out and told Davienne that someone else wanted to wrestle her way more than him. He told her to sit in a chair and wait. Out comes Mastone dressed as a male stripper and he proceeded to give her a dance. The match was fun and super entertaining. It was nice to see Mastone and not have people chant baby Rusev.
6.5/10

Match 4: Xavier Bell defeated Adam Booker. This was a decent match but nothing really special. Both guys are good but seem to be missing that something. Nice to see Bell get another win since he is super over.
6/10

Match 5: The Maine State Posse (Danger Kid and Aidan Aggro) defeated Jeremy Leary and Skylar. Good match. This is the best way to use Skylar. She shined again just like in Westbrook. Good back and forth action. Many good spots. Keep Leary and Skylar as a team.
7.75/10

Match 6: Mike Graca defeated Rex Lawless, Francis Kip Stevens and Space Monkey in a Fatal 4 Way. Decent 4 way but not a match that really jumps out. Lawless is kinda boring. I enjoyed Space Monkey the most in this one which is surprising since I don't really like comedy wrestling anymore.
5.75/10

Match 7: Shane Sabre defeated Kobe Durst. Really good match. I had seen Durst before and knew he was good. This was my first time seeing Sabre and I was very impressed. Great back and forth action and some good spots including a Code Breaker off the top. The only problem with this one is Durst doesn't really have a personality. If he could somehow find one he would be the total package.
8.5/10

Match 8: Troy Nelson defeated Smart Mark Sterling. This was your typical Troy Nelson comedy match that got the crowd going.
5.75/10

Match 9: Ace Romero defeated Brian Fury. Good main event. Fury did some great arm work on Romero. These guys fought hard and gave the crowd good last match for Fury. Surprisingly Romero got the win. After the match there was an excellent show of respect shown for Fury. Greene came in and challenged Ace to a match but Fury interrupted and said he would rather see them team.
8.5/10

Good show and one of the better Limitless Wrestling shows. It had a nice flow and there wasn't a bad match. I'm looking forward to seeing Cody Rhodes in January.

Our buddy Josh chimed in himself...

Here are my scores for it

Random notes: I think, all around, Page is one of best names brought in. Big Daddy Beluga is hilarious. Francis Kip Stevens is so good. I liked Durst, loved Sabre. Sterling would be a great addition to the roster, bringing him in every so often.