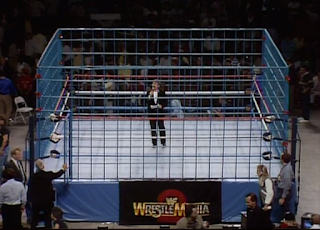 I've always been a fan of the Steel Cage match, there is nothing better than two guys settling a feud inside the confines of a "fifteen" foot high Steel Cage.  I am a big supporter of blood in a cage match in fact a bloodless Steel Cage match just isn't a cage match to me. I've seen it done, quite well actually but I stand by the words that it just isn't the same if someone doesn't get color.

Recently I became curious of the WWE's past usage of the Blue Steel Cage when they started and stopped and the results of that curiosity lead to this post.  Now keep in mind this blog is about the usage of the Steel Cage in the WWE and it's previous incarnations, save information about the first ever recorded cage match. 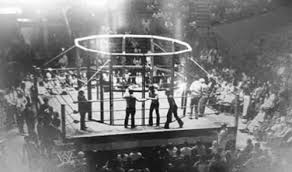 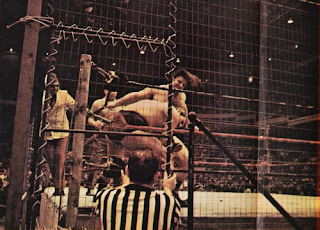 The first Steel Cage match in what we now call the WWE that I can find a record of was January 25, 1969 in Philadelphia, PA at the Arena where WWWF Champion: Bruno Sammartino defeated The Sheik, it states two referees were assigned to the bout. 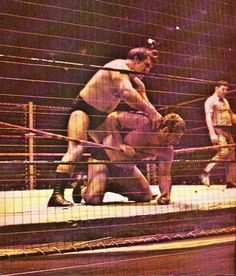 On March 26th of that year Sammartino once again defeated The Sheik in the first ever cage match in Baltimore and he did so by escaping the cage.  This shows that the WWE's history of escaping as a way to win the match as opposed to pinfall or submission dates back to their first ever cage matches. 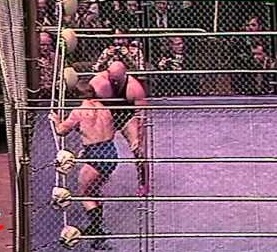 The first ever Steel Cage match to be held in Madison Square Garden was contest on December 15, 1975 as WWWF World Champion: Bruno Sammartino defeated Ivan Koloff by escaping the cage.  This match can be found on the WWE DVD release Bloodbath: Wrestling's Most Incredible Steel Cage Matches.

WrestleMania 2 took place on Monday April 7, 1986 in three different venues across the United States.  The main event of the card held at the Los Angeles Memorial Sports Arena featured Champion Hulk Hogan defending against King Kong Bundy in the debut of the Blue Steel Cage. 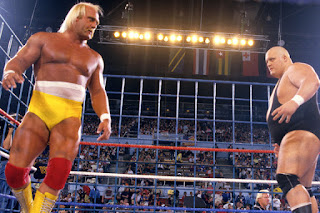 It was promoted that they needed a reinforced cage to withstand the impending collision of Hulk Hogan and Bundy.

It's hard to figure when they switched full time to the Blue Cage because the majority of Cage matches took place at house shows.

On December 13, 1986 Philadelphia Spectrum in a match that aired on PRISM network Champion Hulk Hogan defeated Paul Orndorff in a standard cage match.  They had been having a series of cage matches at house shows leading up to the one and because of this televised match I feel safe in assuming the others were also in the traditional cage. 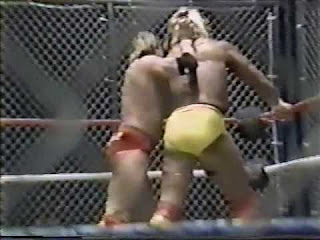 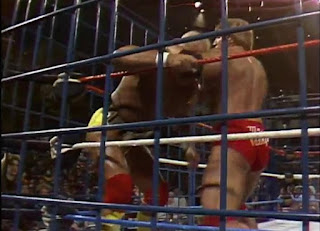 However, the very next day on December 14th in Hartford, Connecticut at the Civic Center Hogan wrestled Orndorff in their very famous Cage match that aired January 3, 1987 on Saturday Nights Main Event.  This is the match where both men's feet landed on the floor at the same time with two referees declaring each the winner until it was restarted and Hogan retained.  This was contested in the Blue Steel Cage. 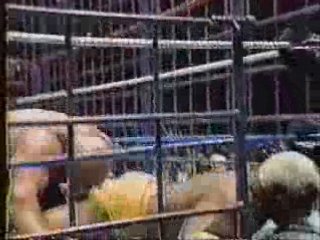 The next recorded Blue Steel Cage match I can find is from October 16, 1987 at Madison Square Garden when "Superstar" Billy Graham defeated "The Natural" Butch Reed.  You can watch it here at Daily Motion.

Traditionally the way to win a cage match in the WWE was to escape the cage either through the door or over the top to the floor.  The first recorded pinfall in a cage I can find took place at Madison Square Garden January 10, 1998 when the Undertaker & The Legion of Doom: Hawk & Animal defeated Heavyweight Champion: Shawn Michaels & Tag Team Champions: The New Age Outlaws: "Road Dog" Jesse James & "Bad Ass" Billy Gunn.  Taker pinned Michaels with a Tombstone Piledriver. 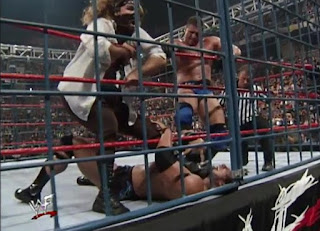 This is where it get's a bit confusing. The last televised cage match of 1998 was at the Breakdown PPV September 27, 1998 at the Copps Coliseum in Hamilton, Ontario, Canada.  A dirty Blue Steel Cage was used in a match that saw The Rock defeated Mankind and Ken Shamrock in a triple threat match becoming the number one contender to the World Heavyweight Championship.

Incidentally the last Steel Cage Match of 1998 in the WWE was on November 27th at a house show in Portland, Maine at the Cumberland County Civic Center featuring The Rock vs. Kane with special referee The Big Bossman.  I was there and this was my first ever live Steel Cage match.  The Rock pinned Kane to win the match.  This was the Blue Steel Cage.

The very next Steel Cage match in the WWE after the one I attended was taped January 26, 1999 at the Convention Center in Tucson, Arizona airing February 1, 1998 on Monday Night Raw.  It featured Triple H defeating Kane in a tradition cyclone mesh cage by escaping the cage. 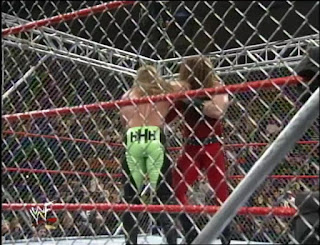 Then at February 14th at St. Valentine's Day Massacre at the Pyramid in Memphis, Tennessee "Stone Cold" Steve Austin defeated Vince McMahon in the debut of the Black bar style Steel Cage.  This is the match when the Big Show debuted climbing up through the canvas from under the ring. 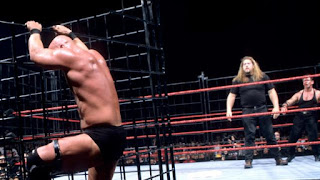 He accidentally helped Austin win buy throwing him at the cage, the panel swung open and Austin fell to the floor.

On March 15, 1999 Monday Night Raw from San Jose, CA The Big Bossman fought Mideon to a no contest when The Corporation attacked Mideon.  This match was also contested in the Black Steel Cage. 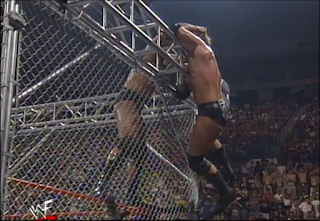 This was in the WWE style of escape to win and The Rock defeated Triple H climbing over the top of the cage. 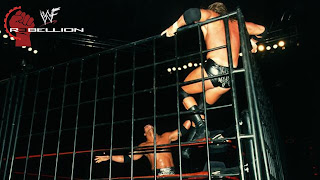 The next televised Steel Cage match is at Rebellion 1999 and was the Black Steel Cage where WWE Champion Triple H defeated The Rock.

The cage matches that followed in the States where the mesh steel cage and it's safe to say that that is what the WWE has used going forward until today.

The only exception is at WWE Rebellion November 3, 2001 in Manchester, England at the Evening News Arena Edge defended the Intercontinental Championship against European Champion Christian in the final televised Steel Cage match featuring the classic black steel bars. 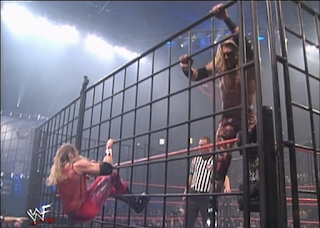 According to a podcast with Edge he stated that this was the only cage the WWE had in England at the time, and that of course the bars were brutal.  Edge won by escaping the cage.

The Blue Steel Cage was a classic signature of the WWE much like the War Games double cage was to Jim Crockett Promotions later WCW.  Next time WWE does a Retro Raw they need to have a steel cage match with the Blue Steel Cage!