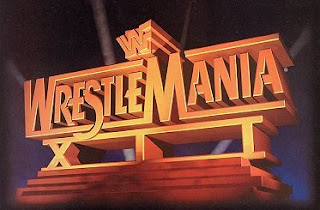 Match 1: Vader, Owen Hart and British Bulldog w/Jim Cornette defeated Yokozuna, Ahmed Johnson and Jake Roberts w/Mr. Fuji. This was a solid match and was the best choice for the opener. Its to bad that Yoko couldn't lose weight. He was a good wrestler and was super over as a face at this point. The stipulation for this match was that if Yoko's team won he would get 5 minutes alone with Cornette. The end came when Vader squished Jake with a Vader bomb.
6.5/10 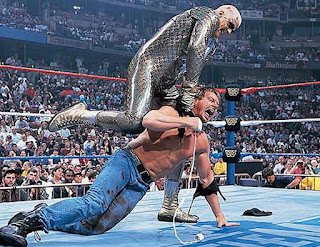 Match 2: Roddy Piper defeated Goldust in a Hollywood Backlot Brawl. This is where they started showing the taped portions of this match and the live ending took place before the main event. It was a good brawl but other than that it was kinda dumpy. They mocked the OJ Simpson white bronco deal with Piper chasing Goldust on the highway in a white Bronco. There wasn't a referee so there wasn't really a winner. Goldust just left after Piper stripped his body suit off, exposing women's lingerie.
5/10

Match 3: Steve Austin w/Ted DiBiase defeated Savio Vega. This was a decent match but it wasn't really anything special. It was really annoying that during this match they had Piper "on the phone" while he was out chasing Goldust on the highway. Piper's phone kept "dropping the call". The end of this match came when the referee was knocked down and Austin hit Vega with the million dollar belt. He then put Vega in a million dollar dream/chin lock to fool the referee.
5.75/10 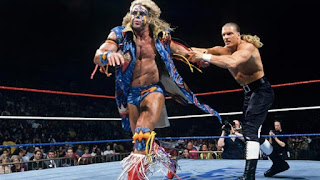 Match 4: Ultimate Warrior defeated Hunter Hearst-Helmsley w/Sable. This was a 1:39 squash. They really wanted to bury HHH in this one. Warrior no sold a Pedigree.
1/10

Match 5: Undertaker w/Paul Bearer defeated Diesel. This was a good match which kinda surprised me. Lots of good big guy brawling. This match did have one of the worst chokeslams ever. Taker got the win with the tombstone.
7.5/10 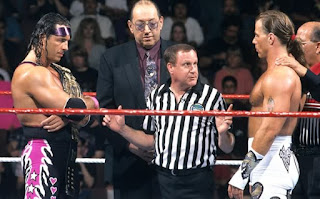 Match 6: Shawn Michaels w/Jose Lothario defeated WWF Champion Bret Hart 1-0 in a 60 Minute Iron Man match. This was a good match but not the super all time classic that WWE would want you to believe. The first 30 minutes were really kinda boring because it was 30 minutes of rest holds. I get why it was really slow but that doesn't change the fact it was boring. The last 30 minutes kinda seemed like a different match. It was much faster paced and was very good. Time expired with Shawn in a sharpshooter and him not giving up. Gorilla Monsoon, who was the WWF president, ordered the match to continue as sudden death. This went 2-3 minutes and seemed kinda rushed. Again I get it, these guys had just wrestled for 60 minutes so they kinda get a pass on the rushed overtime period. This match is definitely not for everyone.
8.25/10 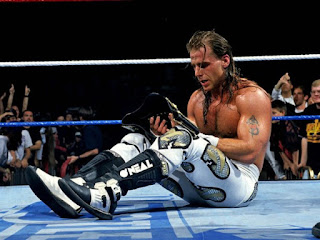 This was a decent show and had the Wrestlemania feel. It had some good matches but the show as a whole won't go down as a great Wrestlemania. Apparently Razor Ramon was supposed to wrestle Goldust in a Street Fight but he was suspended for drug use. I would have much rather seen that match than the Hollywood Back Lot brawl.

Later Readers!
Posted by Michael J. Labbe at 5:13 AM