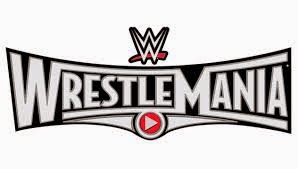 WrestleMania XXXI was the best WrestleMania that the WWE has had in a long time.  I can't say that I completely happy with the results of all the matches, but it was a solid show from top to bottom.

The kick off pre-show featured two matches, the fatal four way for the World Tag Team Championships and the second annual Andre the Giant Battle Royal.   The commentary team for the night was Michael Cole, JBL, & Jerry "The King" Lawler.

The tag team match was chaos from start to finish, it was hard at times to tell who was the legal man in the ring and it became a bit clustery with spot after spot.  I was glad that Kidd & Cesaro retained the titles and the end played out well.  I'm not a New Day fan, Big E Langston looks awkward and out of place smiling and clapping where as Woods and Kingston it seems natural.  Also their finisher maneuver is dumb, Big E's big ending while the little guy jumps off the top rope and pushes down on the opponent.  If anything Woods and Kingston should be a tag team with Big E going solo.

The Andre the Giant Battle Royal was up next.  As far as battle royals go it was a decent one.  The ending with Miz & Sandow finally coming to a head was excellent and even though Sandow lost he looked strong against Big Show.  Hideo Itami won a tournament at Axxess to earn the right to compete in the match and had a HUGE fan response including a Hideo chant. 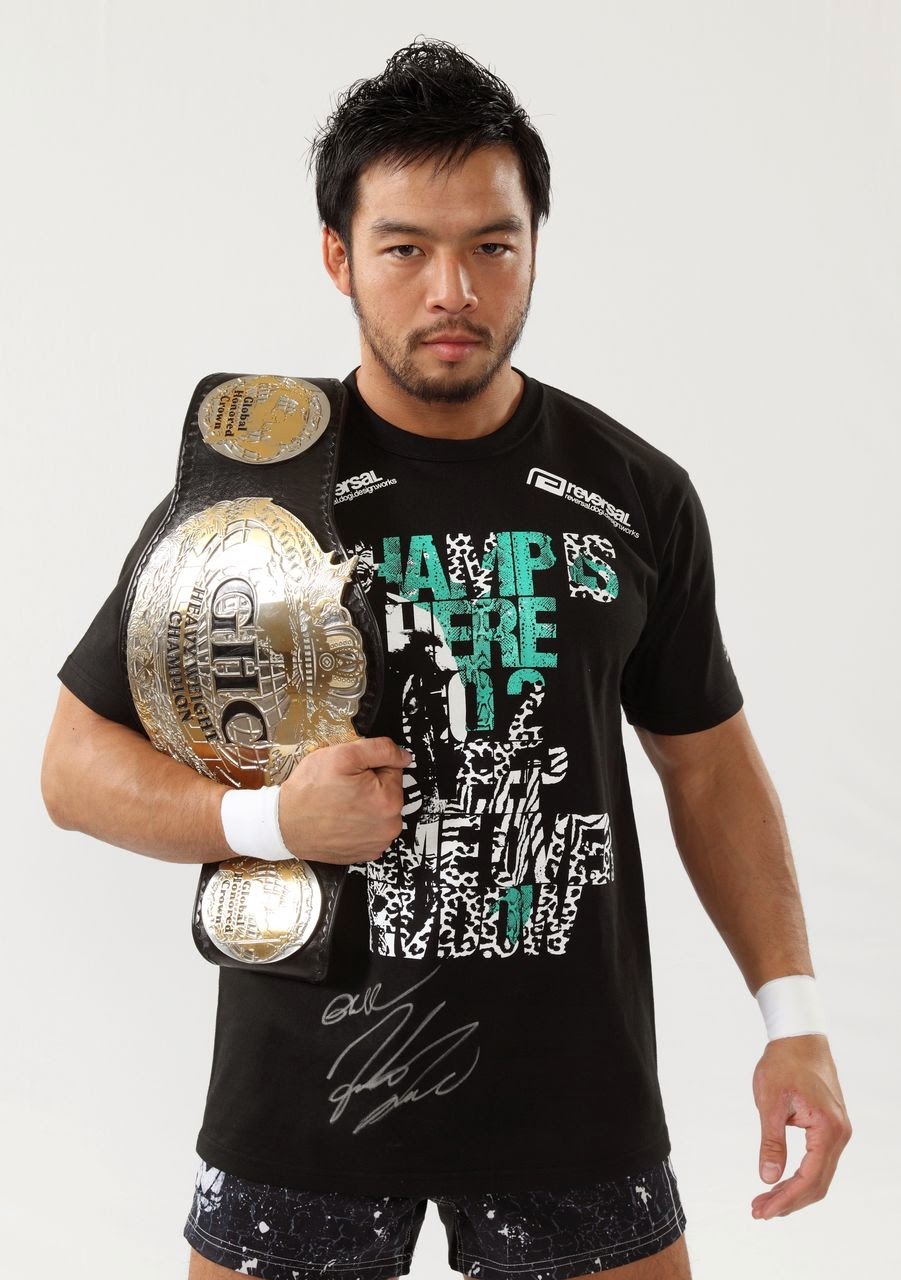 Michael Cole continues to amaze me with how dumb he sounds on commentary.  Maybe he's being told what to say and doesn't have a choice but in the end he is still making the ridiculous comments about Hideo Itami referring to him as a "Young up and comer from NXT" and  upon being eliminated "Welcome to the big leagues."  Hideo has been wrestling for 15 years all over the world, he invented the GTS that CMP Punk borrowed, and he was the NOAH World Heavyweight, Tag Team, Junior Heavyweight, and Junior Heavyweight Tag Team Champion.  When Hideo was brought into the WWE they made his signing a huge ordeal including having Hulk Hogan fly to Japan for a ceremonial in ring contract signing.  I can't imagine they would have Michael Cole say what he did to essentially belittle Hideo by dismissing him as nothing more than an average rookie.  I realize that he hasn't made huge strides in the WWE, yet, but he will.

I really enjoyed the opening packaged for the show and I like how WWE always goes with America the Beautiful in place of the National Anthem.

The Ladder match for the Intercontinental Championship was fantastic!  The finish with Bryan and Ziggler atop the ladder violently headbutting each other was insane and I loved it!  I'm was glad that Bryan won the match and I hope he brings prestige back to the Championship, not that Barrett wasn't a good champion, but Daniel Bryan will be able to elevate it better.  During the match Dean Ambrose took a powerbomb onto a ladder that was rigged to break upon impact which I feel resulted in him taking a worse bump than if he has just taken a fall onto a standard ladder.

Randy Orton vs. Seth Rollins was a solid match and the finish reversing the curb stomp into and RKO was phenomenal! 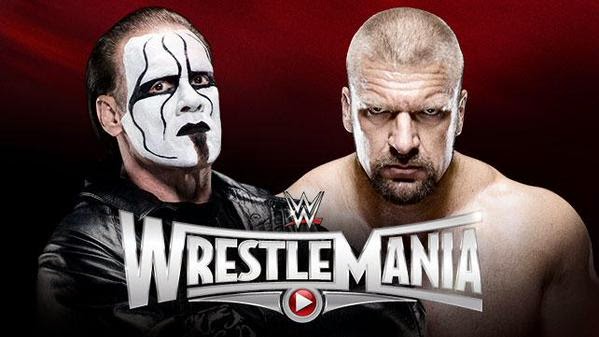 It surprised me that Sting vs. Triple H was 3rd match on the main card, I figured it would happen later in the show considering what a huge deal Sting finally wrestling in the WWE is.  This was probably the weakest match on the card in my opinion.  Sting had very little offense but he did his standard Sting stuff.  The real highlight of the match was the appearance of DX: Billy Gunn, Road Dog, & X-Pac to run interference when Sting had the upper hand, then the nWo: Kevin Nash, Hulk Hogan, & Scott Hall appeared to even the odds.  The highlight of the match was Shawn Michaels then appearing and superkicking Sting!!!  My dream match for the last 20 years has been Sting vs. Shawn Michaels, that might be the most we ever get, but I can hope that maybe this match will still happen.  Sting's loss also surprised me, I realize now the story they were telling was Raw vs. Nitro with DX vs. The nWo and WCW lost.  I would hope Sting wrestles again in the WWE, I would hate to have this match be his only match.  I wasn't a fan of either Sting or Triple H's entrances either.

AJ Lee & Paige over the Bella's was way better than I thought it would be. Not because of the lack of talent in the match but because WWE doesn't usually let their Diva's show than can wrestle.  NXT has great woman's matches, but they do call it woman's down there and not Divas which is interesting.

Rusev has this big pro Russian entrance, which was pretty neat but I really like Rusev's entrance music as it is and honestly that would have works just as well.  Before Cena's entrance they did this whole patriotic entrance video, then he comes out with his own music, not flag insight and people weren't chanting USA, they were instead booing Cena and chanting "John Cena Sucks" along with his music.  As much as they tried, this wasn't the old school USA vs. evil foreigner this was Cena vs. Rusev.  I a big fan of Rusev, he's great in the ring, has great heat, and has had good matches with everyone he's been in the ring with.  Cena is Cena, he didn't need the win, didn't need the championship, basically no one cared.  They wasted Rusev getting his first loss to someone the fans didn't care that he lost too, not to mention he lost after bumping into Lana and a single attitude adjustment making him look weak.  The match was decent, the finish was terrible. 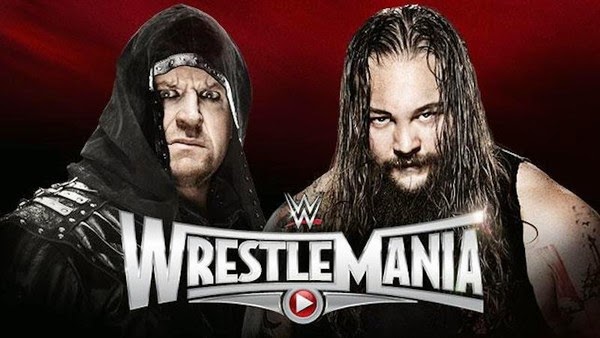 Bray Wyatt was the perfect opponent for The Undertaker.  It was a good match, giving Taker the win he needed after last years loss.  I doubt this will be Taker's last match, in fact he looked physically better than he has in the last few years.  It would be cool to see him stick around this year on a regular schedule. 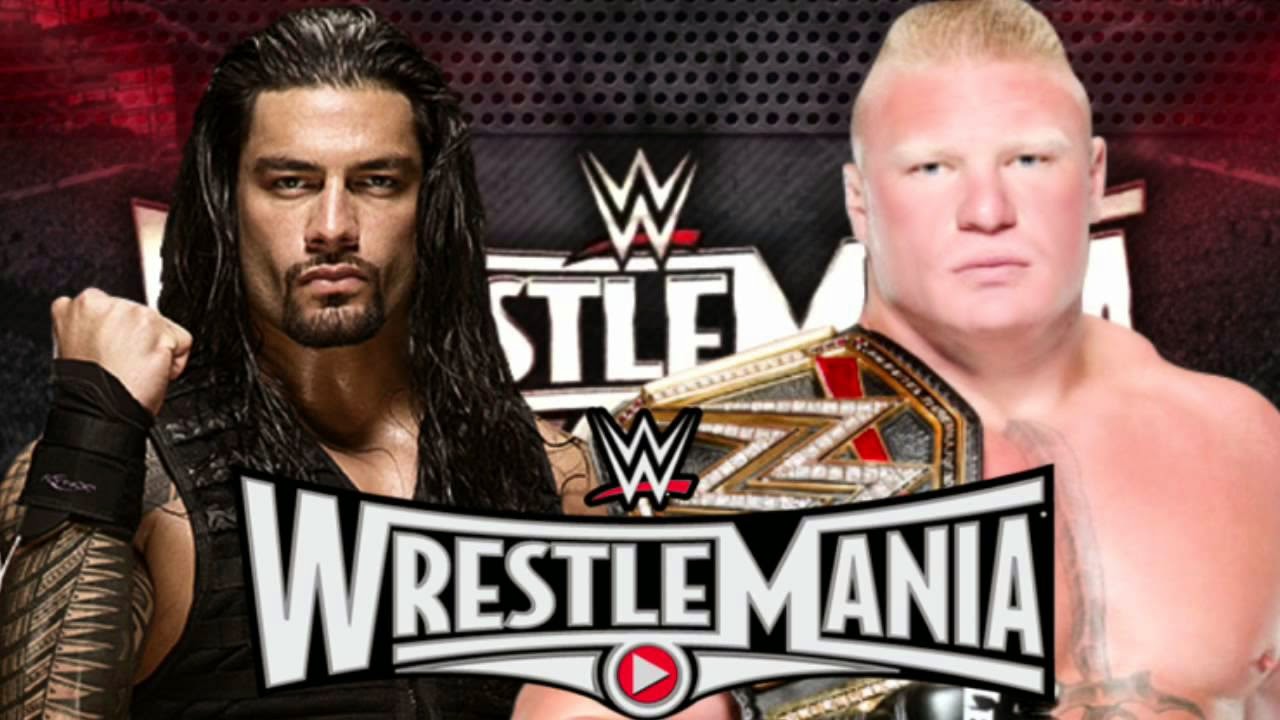 I didn't expect much for the main event, I wanted Lesnar to win and figured and Reigns would win the Championship.  I was pleasantly surprised at just how good the match was, and with Rollins cashing in and the way he did it, was fantastic.  I truly enjoyed the physicality between Lesnar and Reigns.  I would like to see them wrestle again.