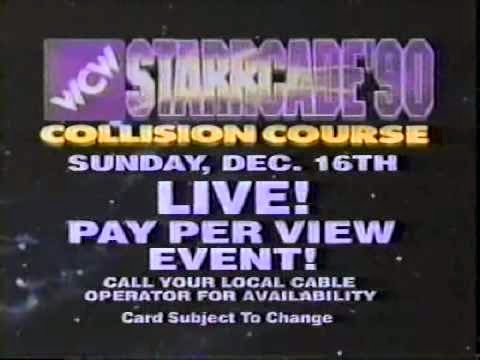 I'm watching Starrcade 1990 and it features the Pat O'Connor International Tag Team Tournament.  I remember watching this back after it came out on home video as my Dad rented all the wrestling home videos for me back then and being surprised at all the wrestlers that I've never heard of before that were in it.

Starting with 1990 WCW was never been shy of having a major card, either a Pay Per View or Clash of the Champions, and either bringing in non-roster wrestlers for a one shot, or debuting a wrestler rather than highlight their full time roster talent.  Starrcade was the first time they did it on such a grand scale.

The United States was represented by the Steiner Brothers and need not to be talked about, others in the tournament I'm familiar with now but at the time, except for The Great Muta I wasn't.  Here are the teams and what I found out about them:

South Africa: Sgt Krueger & Col. DeKlerk
Sgt Kreuger better known as Ray Apollo who also portrayed Doink the Clown in the WWE.  Real name Ray Liccachell, Apollo wrestled as enhancement Talent in the WWE for many years before he was asked to become Doink the Clown after Matt Borne was released.  Apollo was paired with Tiger Jackson as Dink and had a nice run in the WWE has a fan favorite.

Col DeKlerk was none other than "Flyboy" Rocco Rock, Ted Petty.  At the time of the tournament Ted Petty has been wrestling for 12 years and had yet make an impact in the United States.  Three years later he would be teamed with Johnny Grunge to form the Public Enemy where they would go one to be ECW & WCW World Tag Team Champions.

At Clash of the Champions XIII on November 20, 1990 Sgt. Krueger & Col. DeKlerk defeated Kalua & the Botswana Beast to advance to the Pat O'Connor International Tag Team Tournament to represent South Africa.  This is the only official qualifying match that I could find for this tournament.  It was noted in the team bios on the PPV that all the teams qualified for this tournament.

Great Britain: Norman Smiley & Chris Adams
Norman Smiley debuted in 1985 wrestling in the Florida Independents, Japan, & Mexico's CMLL before he debuted in WCW in 1997.  However back in 1990 he had this one match at Starrcade teaming with Chris Adams.  I find it odd that it took him seven years to return.

Chris Adams was well known as a headliner in World Class Championship Wrestling having major feuds with just about everyone during the hey day of World Class.  After WCCW closed down Adams has this one match in WCW where he received quite the pop upon his introduction.  Adams is also now well known for training Steve Austin and their initial feud in World Class and the USWA.  Adams would return to WCW in 1997 for a two year run where he was used primarily as a jobber.  This match would be his only WCW Pay Per View appearance.

Mexico: Konnan & Rey Misterio
Konnan debuted in 1987 wrestling in Mexico for CMLL and later AAA.  He made his US television debut teaming with his trainer in this tournament.  He also wrestled a couple house shows for leading up to this PPV.  Konnan would reach phenomenal heights in Mexico before returning to WCW in 1996.

Rey Misterio debuted in 1976 in Mexico becoming a major star.  He began training wrestlers in 1987 training some of the greatest names in Lucha Libre including his nephew Rey Mysterio Jr.  This event was his major American debut and his only matches in WCW.  He still competes as a headliner in Mexico.

USSR: Victor Zangiev & Salman Hashimikov
Victor Zangiev is a well established amateur wrestler winning several tournaments and cups before leaving amateur wrestling in 1988.  Zangiev debut for New Japan Pro Wrestling in 1989 after training with Antonio Inoki.  He also competed in the UWFI in 1994.  This event would be his only known matches in the United States.  It should be noted that he was ranked #71 in the 1991 PWI 500.

Salman Hashimikov is also an established amateur wrestler winning the gold medal at the World Championships in freestyle wrestling from 1979 - 1983.  In 1989 he moved to Japan and trained with Antonio Inoki for New Japan Pro Wrestling later wrestling for UWFI before retiring in 1994.  This event was his only North American wrestling appearance.  On May 25, 1989 Hashimikov defeated Big Van Vader to capture the IWGP World Heavyweight Championship.  RIGHT!  He would hold the title for 48 days before losing it to Riki Choshu.  I'm actually quite surprised the neither Jim Ross nor Paul Heyman mentioned that he was a former IWGP Champion, instead just discussing his amateur credentials.

Canada: Troy Montour & Danny Johnson
Try as I might I can't find much on either of these two.  Johnson was apparently a second generation wrestler and was featured a lot in the Hamilton, Ontario, Canada area. He is apparently in the Slam! Canadian Wrestling Hall of Fame. He died in 2003 from liver problems.  I can't find even less on Troy Montour, he may have been a full blooded Native Canadian Indian other than this event I've got nothing on him wrestling anywhere.  Considering the number of fantastic wrestlers that are from Canada I'm also surprised that these two are who they went with.

Japan: Mr. Saito & The Great Muta
Mr. Saito was not unknown the United States wrestling fans as he held the WWF Tag Team Championship with Mr. Fuji.  He was later involved in a major public incident that resulted in his arrest.  Mr. Saito would later capture the AWA World Heavyweight Championship.  This event and Starrcade 1995 marked Saito's only appearances in WCW.

New Zealand:  The Royal Family: Rip Morgan & Jacko Victory
Morgan and Victory were actually very well known to the fans of WCW at this time and regularly competed there through out the year.  Rip Morgan wrestled primarily in New Zealand but did have a two year run in WCW.  He is currently still promoting wrestling in New Zealand.  Jack Victory is probably best know for his time in Extreme Championship Wrestling.


I hope you found this as interesting as I did!