Over the weekend at the Boston Pro Wrestling Marathon I managed to add 12 signed trading cards to my already large collection of cards. 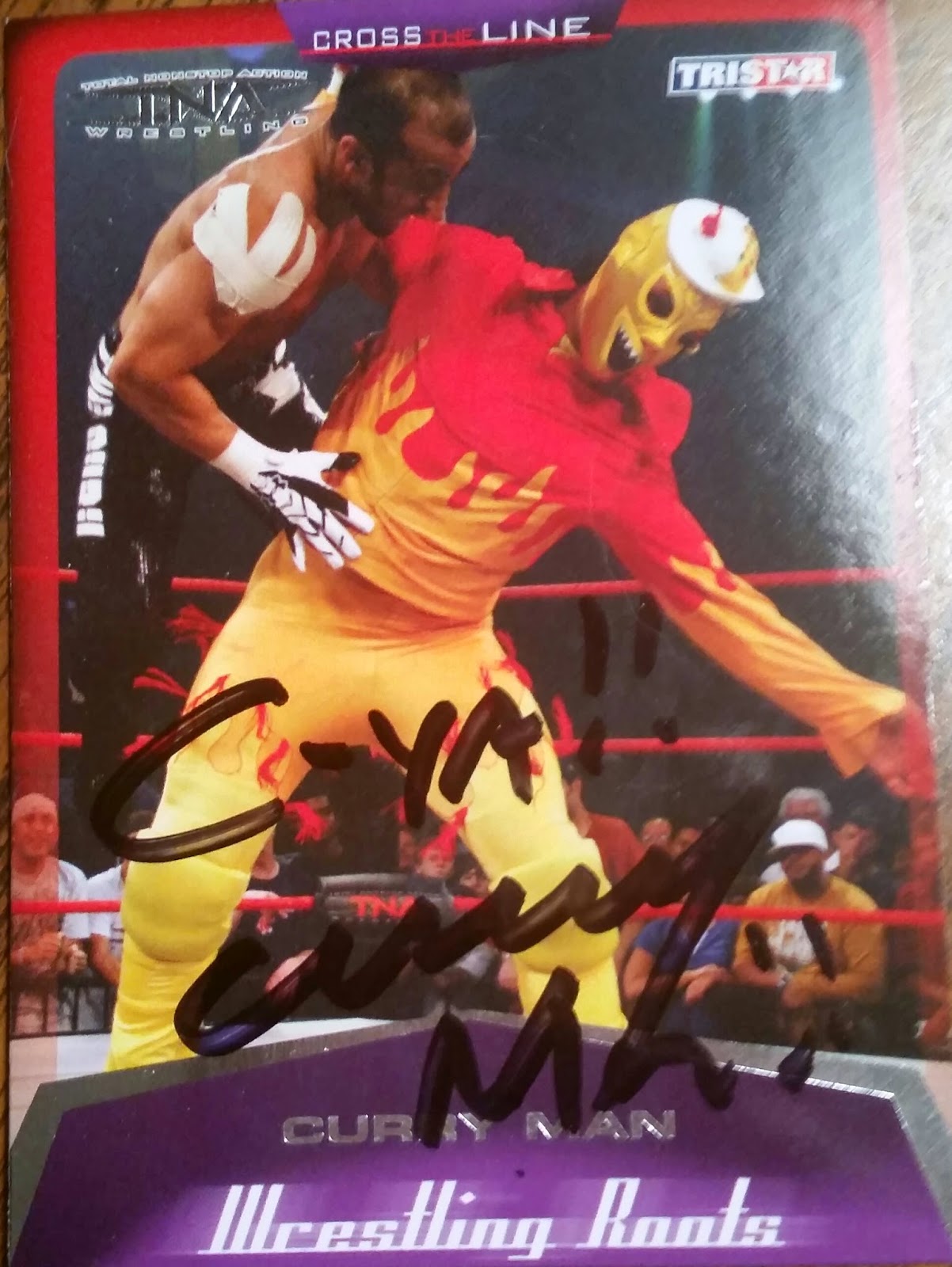 This Curry Man card is from the TNA Cross the Line set released by TriStar in 2008.  Quite possibly "Fallen Angel" Christopher Daniels is the man under the mask, at the end he forged the signature for me. 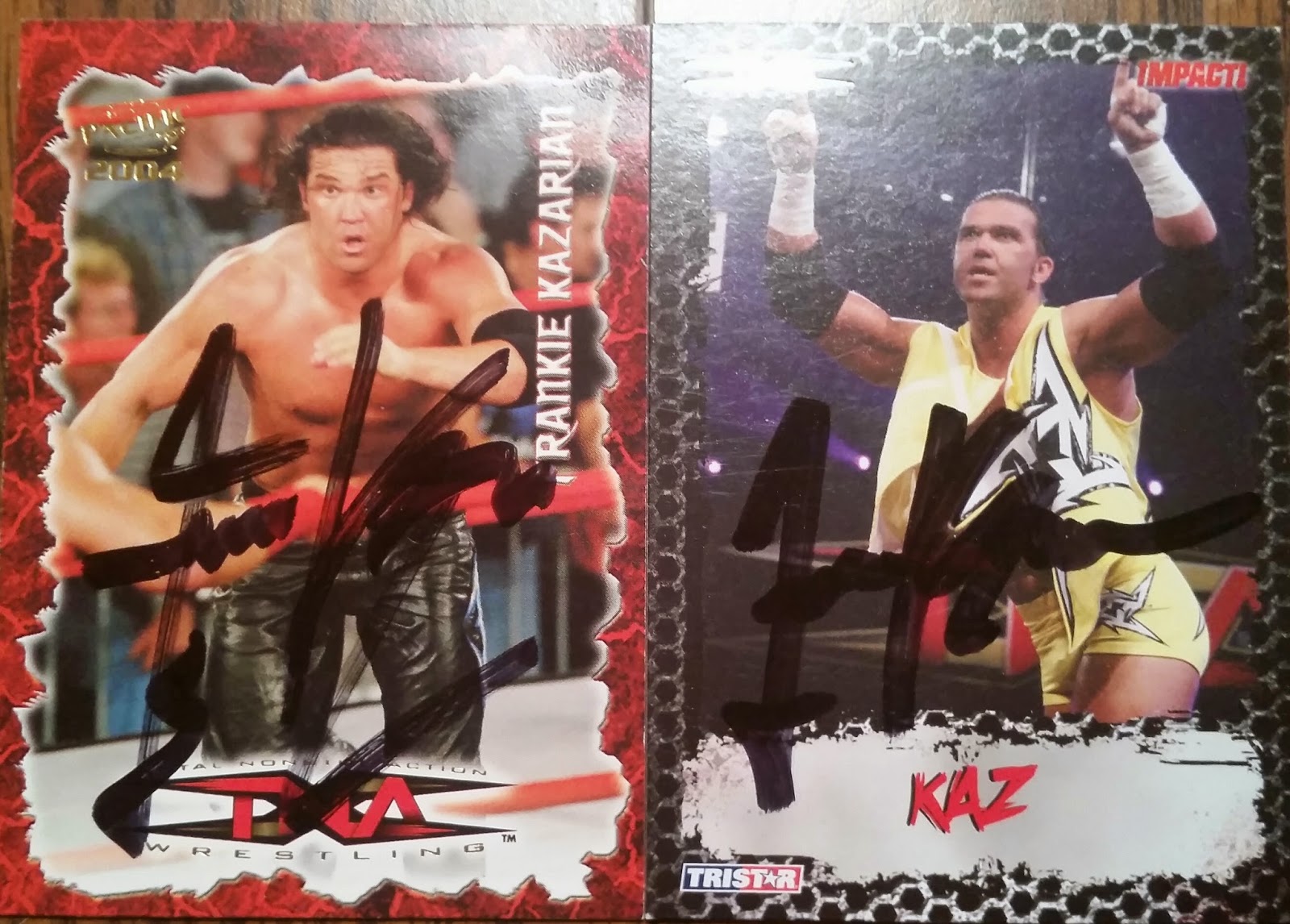 Frankie Kazarian: The first card was released in 2004 by Pacific Trading Cards and the second in 2008 by Tristar for the Impact card series. 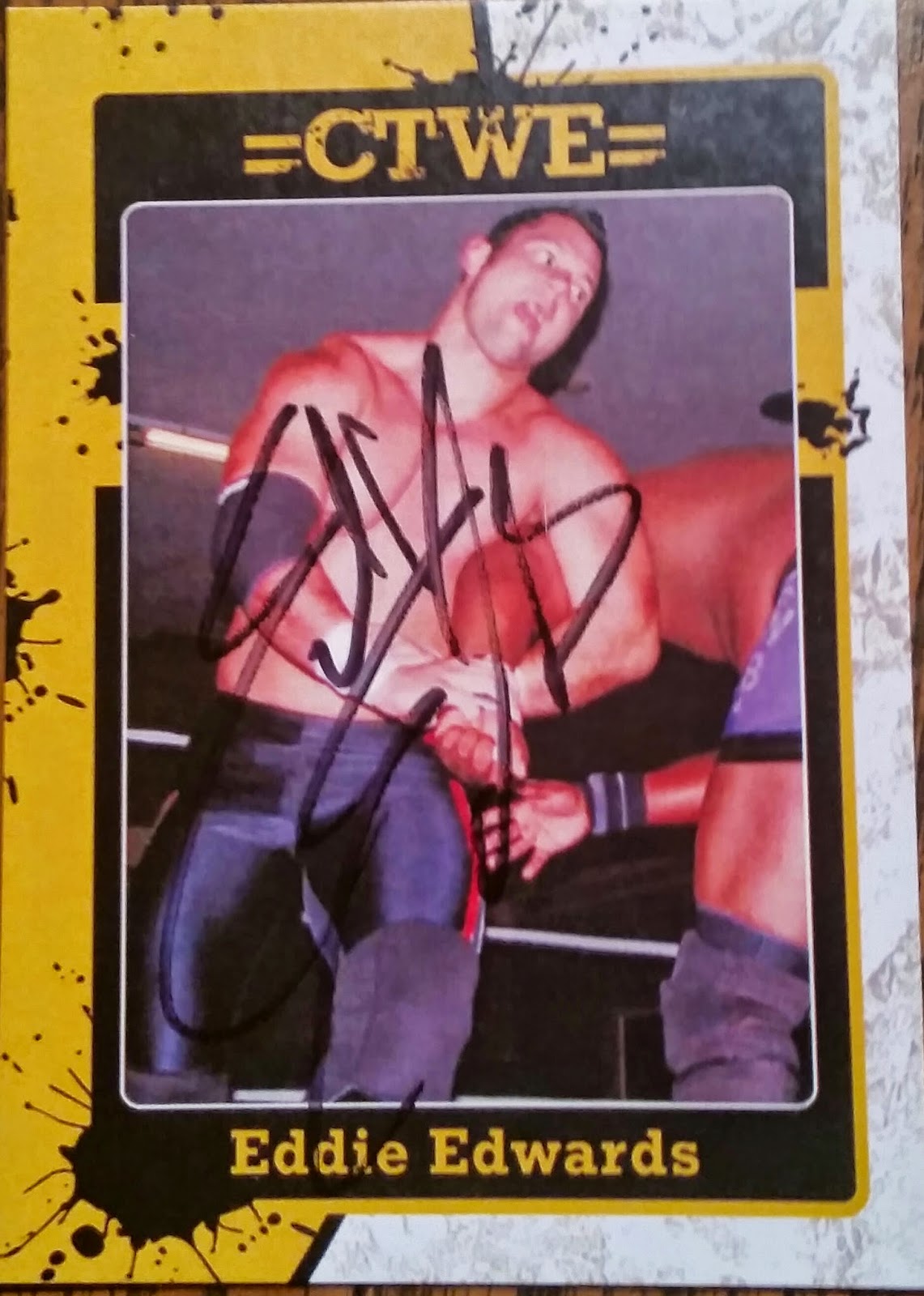 This Eddie Edwards card was made by Custom Sports Cards for Connecticut Wrestling Entertainment in 2012. 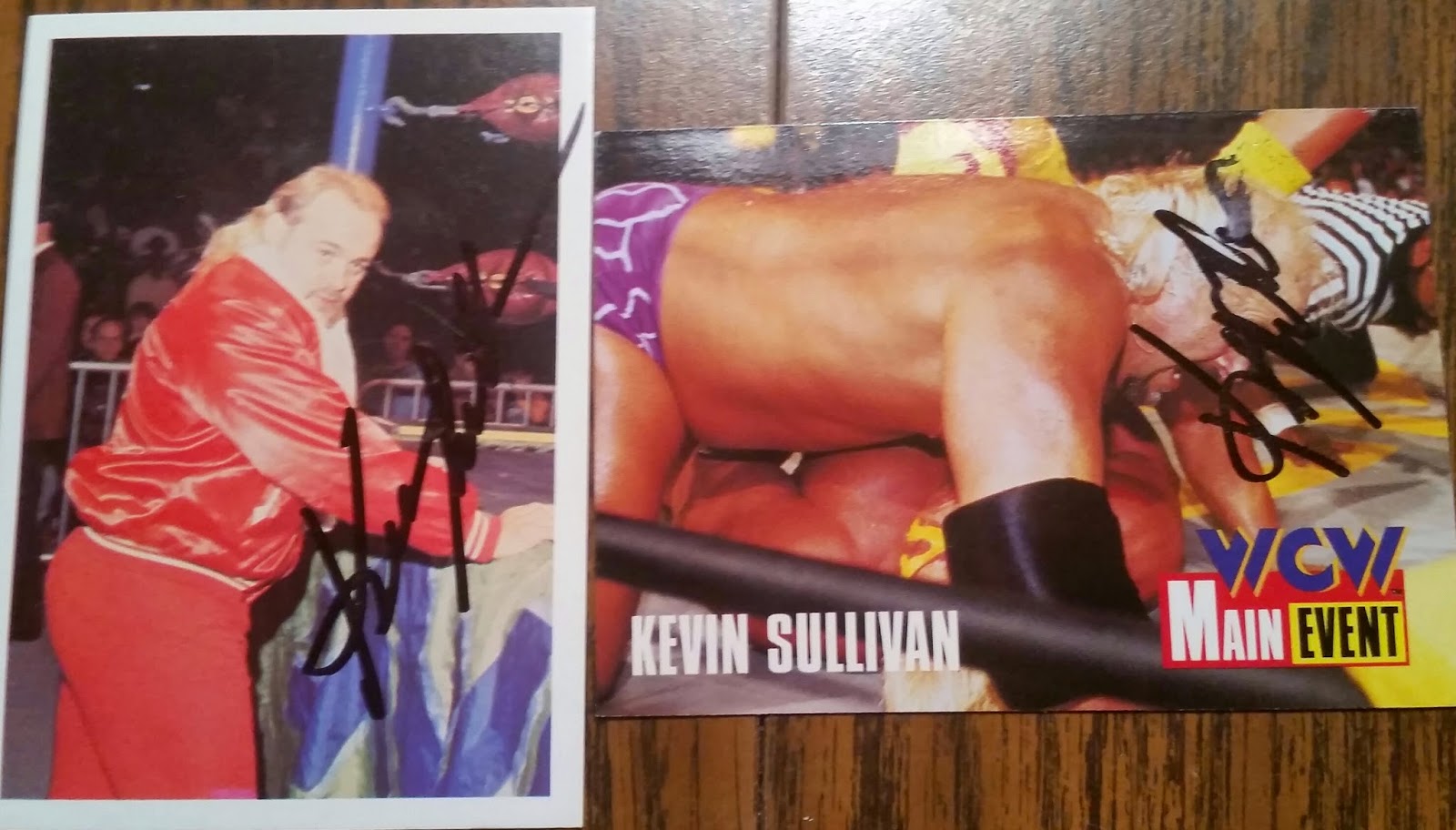 "Taskmaster" Kevin Sullivan signed both of these cards for me.  The first a NWA (National Wrestling Alliance) card released in 1989 for Jim Crockett Promotions by Wonderama International.  The second released in 1995 as part of the WCW CARDZ series. 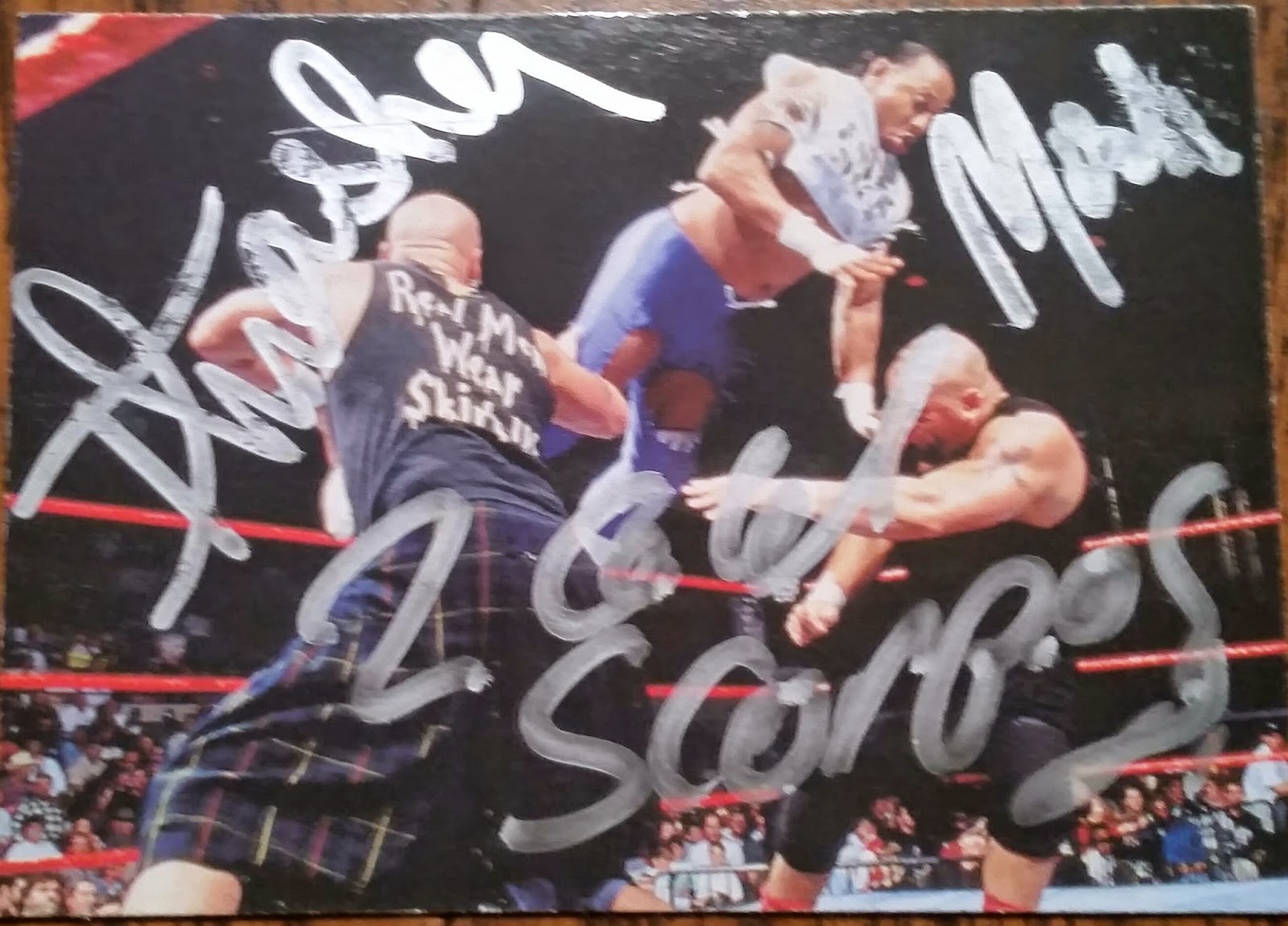 This card was already signed by 2 Cold Scorpio and at the Boston Pro Wrestling Marathon I was able to get Mosh & Thrasher The Headbangers to sign it as well.  It was released in 1998 by Comic Images as part of the WWF Superstarz line. 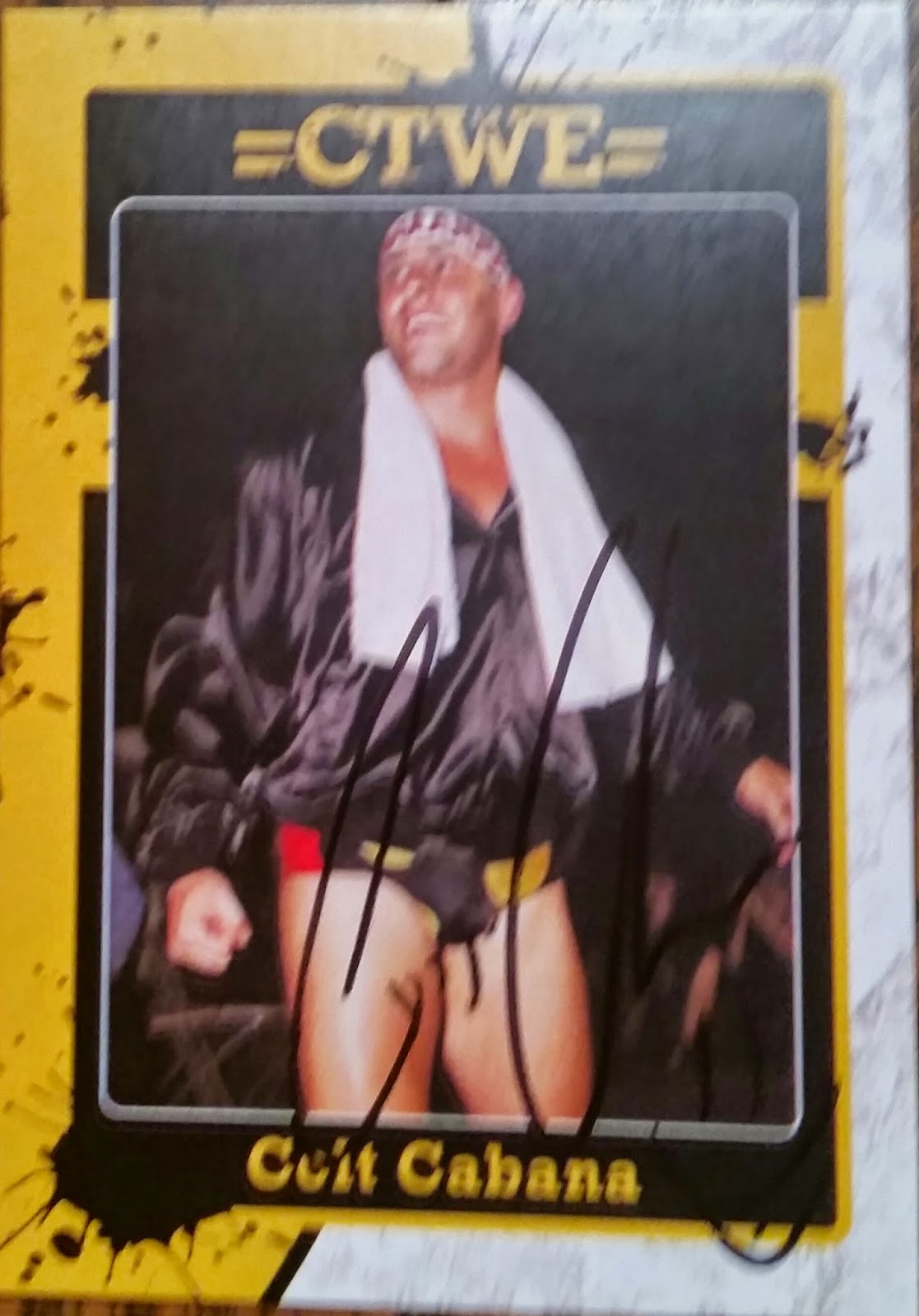 This Colt Cabana card was made by Custom Sports Cards for Connecticut Wrestling Entertainment in 2012.

These cards were signed bu The FBI: Full Blooded Italians.  The first card was released by the WWF in 2003 made by Fleer and signed by Little Guido as his Nunzio character.  The second card was released in 2000 by San Francisco Toymakers along with an ECW Figure is signed by Little Guido.  The third card signed by Tony Mamaluke was released in the United Kingdom in 2005 as part of the WWF Payback card game series. The final card was released in 2010 by TriStar for TNA Impact Wrestling featuring the FBI from their match against Kid Kash, Simon Diamond, & Johnny Swinger from the Hardcore Justice PPV.  This card is signed by both Mamaluke and Little Guido, neither of them had ever seen it before and Mamaluke was very excited by it.  I referred them to Huskerhavs which is where I get pretty much all of my cards.