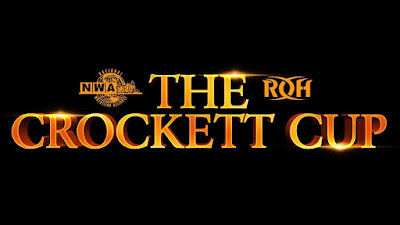 This past weekend I attended the NWA’s revival of The Crockett Cup. It has been thirty-one years since the last Crocket Cup tournament and I was thrilled that I was able to attend such a historic event.

If you follow the Ten Pounds of Gold or pro wrestling in general, you’ve probably already seen the results of this event. So, instead of going match-by-match and recapping I’ve decided to break down the experience of attending an NWA event in 2019 by dividing it into two categories (The Good and The Bad).

The Match Quality
Nick Aldis put on the best match of his career, but more on that in a bit.

Overall the matches were good to very good. The tournament was set up well with some interesting matchups (Rock N Roll Express vs. The Briscoes, Flip/Bandido vs. Guerrero Maya Jr./Stuka Jr) and two of the three championship matches were worthy of their respective championships. 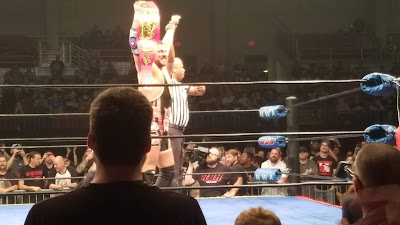 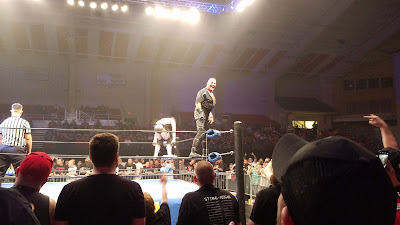 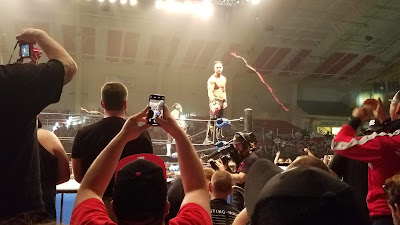 There was a great mix of international talent, ROH talent, legends, and surprises. The matches were diverse enough that there was something for just about everyone in attendance to enjoy whether you liked hard hitting brawling style matches or high flying flippy stuff. I was very satisfied with how it played out.

The Throwback Set
Seeing the classic NWA ring apron and very minimalistic 80’s style set was awesome. For a guy like me who loves all things retro I couldn’t have asked for something better. It truly felt like I was walking into an NWA event circa 1986. 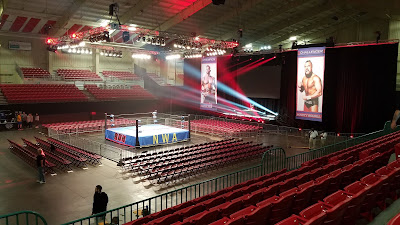 My favorite part was the huge banners that hung down that were straight out of Rocky. 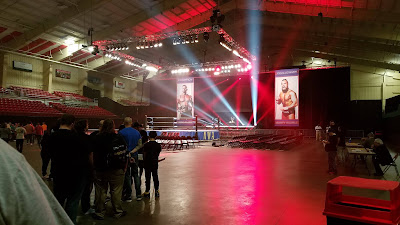 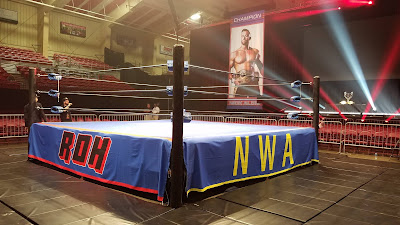 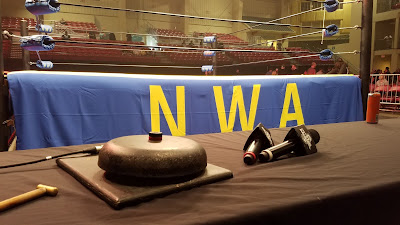 My only minor qualm about the throwback set was it did seem a little counterintuitive to the NWA’s mission of bringing wrestling up-to-date for a modern wrestling fan. But then again, their mission statement isn’t really any of my concern and I liked feeling like I was at a classic NWA event.

James Storm
James Storm’s arrival at The Crockett Cup was a pleasant surprise. I’ve always been a huge James Storm fan and he came out looking great and cut a fantastic promo. I loved how he set up his reasoning for crashing the party was to win the National Championship that way he could climb the ladder to the World Title since management had it out for him. That type of gimmick and reasoning works well for him and I think it could breathe some fresh air into Ten Pounds of Gold if you have a wrestler who feels like the NWA is out to get him and he’s having to claw his way back in. 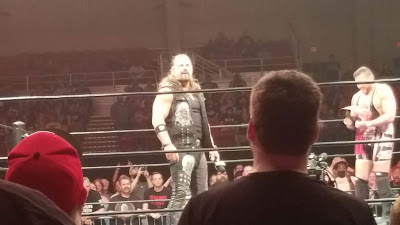 Blood
There is a major lack of blood in wrestling these days. I believe the demand for family friendly wrestling has really pushed promoters away from busting up their wrestlers. Well, The Crockett Cup decided to go back to heyday of the NWA and we saw two matches with blood. The first was The Rock N Roll Express vs The Briscoes where Ricky Morton got color. The second was the main event, where Nick Aldis was busted open big time and bleed all over the place. It was a fantastic prop for storytelling and was no doubt done in order to help create sympathy for a wrestler that is clearly not over with the fans. 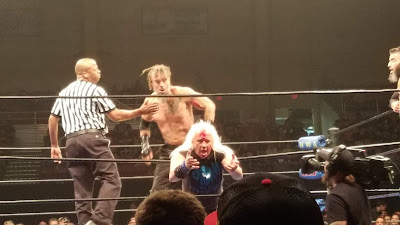 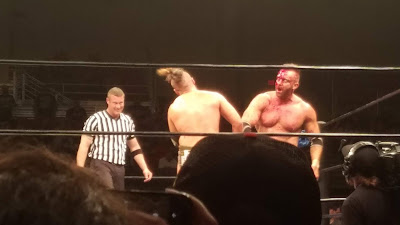 It was hard not to respect Aldis after the main event, because he did bleed and he bled a lot. Here is a great shot of the ring after the match. 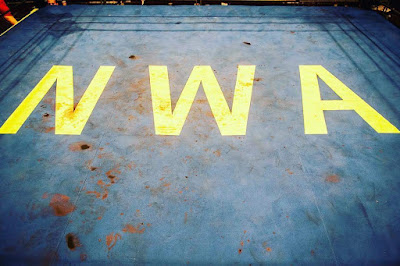 The Main Event Delivered
More often than not, the main event doesn’t deliver. When you have a card full of talent from around the world that features the likes of Flip Gordon, Bandido, Nagata, Kojima, The Rock N Roll Express, etc., it’s hard to create a main event that isn’t overshadowed by one of those amazing talent’s earlier matches. Heck, I’m struggling to come up with a live event that I’ve been to where the main event was the best match on the card. However, at The Crockett Cup, the main event delivered. It was the best match on the card and it told a cohesive story that really put over Nick Aldis as champion. I believe most in attendance were disappointed with the outcome, but Aldis came off as a better champion after the match then the one he went into the match with and definitely earned the respect from the crowd.

Nick Aldis
The belt needs to come off Nick Aldis. He has a phenomenal look, but he just doesn’t have what is needed to take the NWA to the next level. If anything is holding back the NWA it’s telling the fans that Nick Aldis is the best in the world when clearly he is not.

Here is a photo I took of Marty Scrull and Nick Aldis’ meet and greet lines. 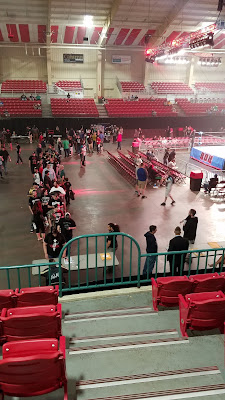 The World Champ should have the longest line or at least someone in line.

I actually met Nick Aldis at this event and got a photo with him. I was second in line (of three people) and it was one of the more unpleasant experiences I’ve had meeting a wrestler. He didn’t seem like the wanted to be there; he barely spoke to me, and so I tried to tell him this touching story and he could have cared less. I understand if he was tired or had a huge line in front of him, but there was one person behind me and he had taken just one quick photo beforehand.

In comparison, Marty Scrull’s line was massive and he took time with every fan to chat, smile, and interact. Obviously, I don’t run a promotion, but if I did, my belt would be one the guy who acts like a World Champion and seems like he wants to be there.

Meet and Greet Price Gouging
The NWA set up two neat fan interaction opportunities over The Crockett Cup weekend. The first was a dinner with the Marty Scrull, Nick Aldis, Willie Mack, Kamille, and David Lagana. For $150, you got to spend three hours with the wrestlers, eat food, get a pin, and take photos with all the wrestlers.

The second was a VIP Experience the day of the event that lasted from 11 AM to 4 PM. For $150, you got to meet a majority of the wrestlers for the event, attend four panels, take photos and get a single autograph from each of the wrestlers, take your photo with Billy Corgan and The Crockett Cup. Overall it wasn’t a terrible deal, but $150 is a lot of money and it’s even worse if you attend the event with someone who doesn’t necessarily care about meeting all these wrestlers like I did and have to pay double.

I don’t have any issue with VIP Experiences and in fact, I like them. It’s a great opportunity for the fans and the promoters to make money. However, I do have an issue when these “Experiences” are used to price gouge the fans.

The NWA waited until just two days before The Crockett Cup to release any information on any additional meet and greets, a standard at most wrestling events. Once they finally released the “limited number of meet and greets,” terminology they were using over and over to push fans to do the VIP Experience, we discovered that almost all of the wrestlers would be available with exception of the ROH wrestlers like Flip, Bandido, and The Briscoes. Marty Scrull was available as discussed above.

The prices started off around $30 and went up to $40 for bigger stars like Aldis and Scrull. This is roughly double what it would cost to meet Marty Scrull at a ROH event or Aldis anywhere else.

It was clear that the inflated prices and the restriction of information were put in place to push fans into buying the VIP Experience, which from the pictures on Instagram was not worth it.

This was the NWA’s third event and between the way the Meet and Greets were handled and Nick Aldis general unpleasantness, the whole fan friendly appearance the NWA puts on in its Ten Pounds of Gold series and social media presence really came off like a farce. Putting up a massive paywall between the fans and meeting the wrestlers really is a bad way to go about doing business in the wrestling world in 2019.

The Women’s Match
Madusa was a last minute addition to the card and she was scheduled to present the NWA Women’s belt to the winner of the vacated title. It was clear when Madusa came out that she wasn’t prepared. She kept looking at her phone for notes and well… it was one of the worst parts of the show. She struggled to complete sentences and the fans even began to heckle her. 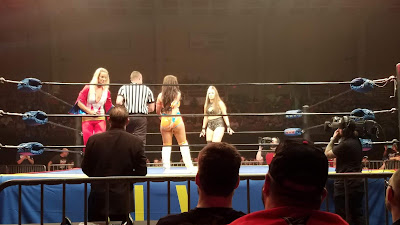 Then came a match with two capable women, who just didn’t click. There was no build up for this match (since Jazz dropped out a week before) and it just came off flat. The crowd was basically silent and I think it might have been smarter to scrap the Women’s Title Match and maybe set up a tournament in the future to build in some reasons to actually watch and take the time to develop some characters.

The Wild Card Tag Team
A tag team consisting of Royce Isaacs and Thomas Latimer (formerly known as Bram) won the Wild Card Battle Royal that began the show and this earned them a spot in The Crockett Cup Tournament. It was one of those situations where since they were unknowns, you’d just assume they would move onto the next round and be eliminated rather quickly. Instead, Isaacs and Latimer ran the board and managed to make it into the finals (though various cheap tactics) which only infuriated the fans.

Now, smart booking says this is great. You get a tag team that everyone hates, watch them cheat their way to the top, and the fans will boo and enjoy it. However, Isaacs and Latimer came across like a couple of jobbers with no charisma, personality, or even noticeable talent. They seemed like two perfectly capable workers, but not someone you want to see running the board and beating talent like Flip Gordon and Bandido.

I was happy with them defeating The War Kings in first round because honestly, I thought the NWA was going to go the predictable way and put the belts on them. So I was legitimately shocked when Isaacs and Latimer won that match. However, that should have ended their run and they shouldn’t have been allowed to continue to win since it really put a drag on the show. The only other time the crowd truly died was in the finals of The Crockett Cup because it looked like Latimer and Isaacs were going to pull this off and not a single soul in the audience cared. Thankfully, that isn’t what happened. But before the NWA starts spotlighting Latimer and Issacs on The Ten Pounds of Gold, I’d recommend they find a way to make to them interesting and not look like two generic indy wrestlers just starting off.

Overall I had a blast at The Crockett Cup. The majority of the card was fantastic and I loved all the nods to the NWA’s past with the legends in attendance and the set design. There is still room for a lot of improvement for the NWA including figuring out to enhance the fan experience without being greedy and developing some stars of their own. 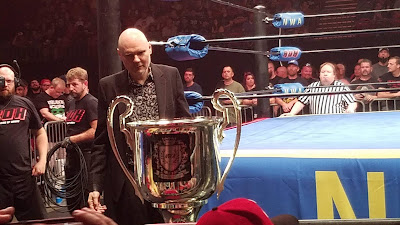 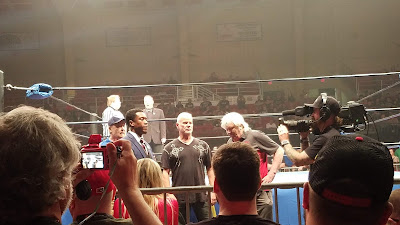 Would I attend another NWA event? Definitely, but I would go into it knowing that I’d just be there for the wrestling and none of the extras that I look forward to at other promotions like AML or Ring of Honor.
Posted by Brandon at 8:51 PM