In this final post of 2017 we take a look at the last signed trading cards that I got in 2017.  All these cards are through the mail success. 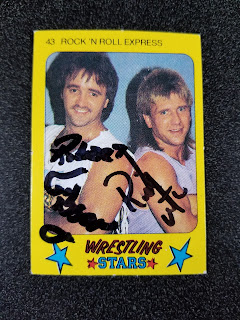 This card is from the 1985 Wrestling Stars set.  I got it signed by Ricky Morton last year.  I mail this October 5, 2017 to Roberts wrestling school and got it back December 20th.  I previously got an NWA Wonderama card signed by Gibson at Carson's Pro Wrestling World in Allentown, Pennsylvania. 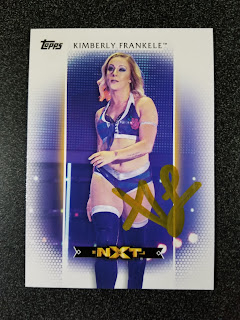 This card is from the Topps WWE 2017 Women's Division.  This card is unique as after it was made her name was changed to Abbey Laith.  I mailed this card to the WWE Performance Center on November 1, 2017 and got it back December 19, 2017. 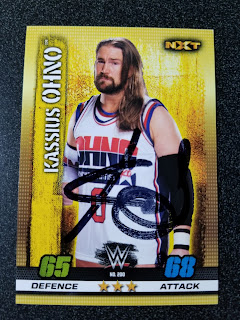 This card is from the Topps 2017 Slam Attax trading card game.  I mailed this to the WWE Performance Center on November 1, 2017 and got it back signed on December 26th.  This is my third card signed by the former Chris Hero, you can see the other two here. 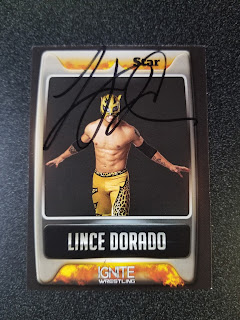 This card was made by the independent promotion Ignite Wrestling based out of Florida.  I had ordered a Martin Stone card from them to hopefully get signed next month at Limitless Wrestling and they sent this card along with it which was pretty awesome.