My Wrestling Year in Review 2017

This blog has 137 posts and we added a contributor in Brandon Myers whose first posts were about his WrestleCade 2017 experience.  I had an article about me and my signed card collection featured in the collectibles column on the Pro Wrestling Torch website and contributed to a year end column.

Speaking of my trading card collection, between through the mail success, live events attended, and a few from my buddy Roy I added pretty near 70 cards bringing my total close to 500.

I made it to eleven wrestling shows this year including: six Limitless Wrestling, two IWE, Chikara, WWE House show in Augusta, and Ring of Honor Best in the World PPV in Lowell, MA.  I took my son Canaan to almost all of these shows and my friends Mikey and Roy were at all of them.  You can follow this link here to read reports of each show.   It was at Ring of Honor that I captured the beat wrestling picture I have ever taken. 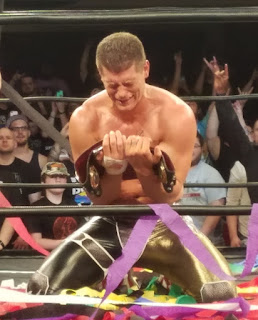 This was captured just after Cody was handed the Ring of Honor World Championship that he had won defeating Christopher Daniels.  The pure emotion that Cody is releasing as his dream of becoming World Champion is attained is tremendous.

New Japan Pro Wrestling had probably it's greatest year ever as far as worldwide exposure and producing some of the greatest matches we've seen.  The trio of matches between Kenny Omega and Kazuchika Okada started off strong at WrestleKingdom 11.  Then their 60 minute draw at Dominion 2017 showed that this style match was still possible in 2017.  Their third match at the G1 Climax semi-final show where Omega pinned the Champion.  As it stands they are 1 - 1 - 1 in their series leaving us with tie-breaker hopefully sometime in 2018.  Incidentally these matches were rated 6 stars by The Wrestling Observer. 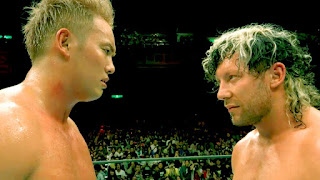 Okada had an amazing year as IWGP Champion with matches not just against Omega but also Katsuyori Shibata, Cody Rhodes, Bad Luck Fale, and Minoru Suzuki.

I got my first completed of Progress Wrestling this year when I watched the Super Strong Style 16 Tournament.  Similar to PWG's Battle of Los Angeles this is a three day event with some of the best in the world competing in a single elimination tournament.  If you have the chance check out Progress Wrestling you will not regret it.

On the WWE side of things I was more impressed with their network products than Raw and SmackDown.  The year started with an amazing United Kingdom Championship Tournament in January and in the Summer another tremendous tournament with the Mae Young Classic.

Pete Dunne & Tyler Bate had their own Trio of matches this year that started in the finals of the UK Tournament with Bate defeated Dunne to become the inaugural champion.  Then at NXT Takeover Chicago on May 20th and finally Dunne retained his championship on the November 29th episode of NXT. 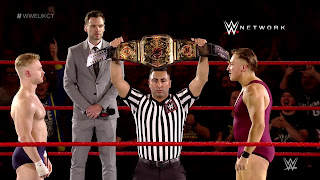 Like I said wrestling 2017 was a great year for wrestling and there was a lot more awesomeness that happened in wrestling than what I briefly mentioned here.  The year 2018 is already shaping up to well for me if my plans hold true.  I have Limitless Wrestling on January 19th and on March 16th I will fulfill a lifelong dream of attending a show at the fabled Madison Square Garden.

Later Readers!
Posted by Michael J. Labbe at 2:00 AM