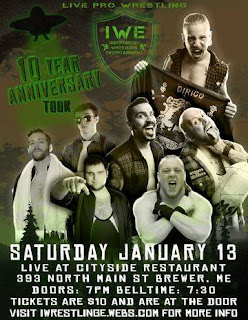 This was awful. Roadblock did give Gleitz a stinkface which was pretty funny.
1/10

In Ring: The Era of Violence come out with Chad Epic and Steven Lust. Bill Vaux says that he has post concussion syndrome and can't wrestle but IWE did allow for a replacement. Out comes Adam Ricker carrying a beaten up Elite Terrell.

Marsh and Ricker dominated most of the match. Chad Epic did get himself thrown out but it didn't matter because his team won after a World's Strongest Slam then a Frog Splash from Marsh.
4/10

Ricky Williams looked good in this match. Decent match that saw Williams get the win after a triple german suplex then a flying headbutt.
5.25/10

In Ring: Sonny Roselli and John Bryer come out for the Circle of Champions presentations. First up was Alexander Lee. He said that he has done a lot of stupid things in his 14 year wrestling career but he still enjoys doing it. Next was Johnny Primer. He talked about all of his different gimmicks then called in Mikey Primer and they hugged. Last was Eric Johnson. He talked about starting IWE and how he wouldn't be Eric Johnson without the fans. He then put Bomb and Sonny on the spot about him coming back and the crowd freaked out. Eric left, then the lights went out. The Mutts with Sarah D'Arrico and August Leon came out. Sarah says that they are back and wishes everyone a happy 10 year anniversary. Ian Griffin then calls Bomb and Sonny the drunks. Alex Caine gets really pissed and freaks out saying they ruled the tag team division but were given a kick in the ass on the way out the door. August Leon then says that they are basically going to take over IWE.

This match didn't really do it for me but it was good to see Shorey get a win.
4/10

Moxie pretty much dominated this match. Ricker did get a brief advantage when Rob Marsh, Bill Vaux and Steven Lust came out allowing him to get a bat out from under the ring, but The Street, Derek Shorey and Ricky Williams came out and ran them off. Moxie then got the bat and hit Ricker multiple times for the win.
4/10

Great match that the crowd was super into. Strange worked the arm throughout the match and Harris did a great job of sellling it. Harris got the win after an RKO then a Dragon Sleeper. Hopefully this match gets released because it was really good.
8/10

In Ring: Todd Harris says that he lost his dad recently but his dad was watching him win tonight. He then made fun of the crowd and rubbed in his victory.

In Ring: Captain comes out and talks about the IWE training school. He then brings out the current trainees. Mason X comes out and destroys them until Mikey Primer makes the save.

This was a massive squash. I'm liking the new Mason X
0/10

Great match that spilled to the floor early. These guys really beat the hell out of each other. Midway through Primer got knocked down from a kick. Gleitz came out but Primer got back up and gave him a cutter. In the end Danger Kid hit a Swanton Bomb on Lee while he was pinning Aggro for the win.
8/10

In Ring: MSP makes up and help Danger Kid celebrate his win, when The Mutts come out. They stare down MSP then the 2 teams start yelling at each other. Alexander Lee spit on Alex Caine then shortly after there was a massive brawl that spilled into the crowd. A bunch of guys came from the back to break it up and a trainee got knocked out. Rob Marsh also got really pissed and wanted to fight The Mutts. This didn't seem like this was supposed to happen.

Overall this show scored a 34.25 out of 80 for an overall score of 42.81%. The first half was lacking a little bit but the 2nd half more than made up for it with two great title matches and an awesome ending. 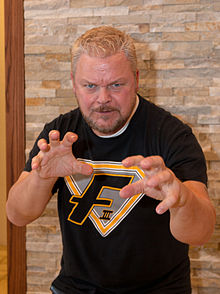