These cards I got signed on September 22, 2017 in Westbrook, Maine at the Limitless Wrestling show "Question the Answers."  You can read my live report about it here. 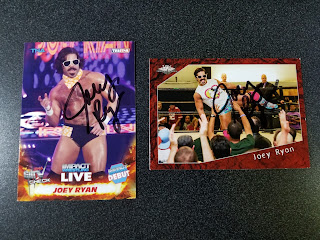 The King of Dong Style made his Limitless Wrestling and I'm pretty sure State of Maine debut at show.  The card on the left is from the 2013 Tristar TNA LIVE set, the card on the right was Independently made in I believe 2013 in the 60 card IPW Trading Cards set. 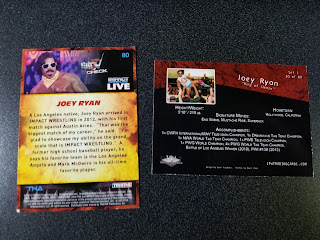 Better known to most as EYFBO Angel Ortiz and Mike Draztik have been in Limitless before and I'm sure will be back in the future.  This card is from a set of 5 cards that were made in conjunction with the State Island Yankees, the Richmond County Bank Ballpark, and Impact or Global Force Wrestling.  They were given out to everyone that attended the house show that was held at the ballpark. 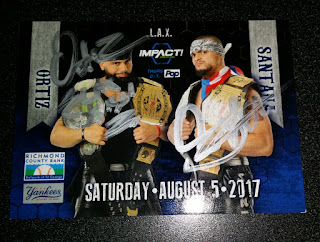 I got a set for myself and Roy when I wrote the ballpark and they gave them to me.  TNA wanted $5 for the set, EYFBO actually had them for sale as well for $5.  Other wrestlers in the set include Allie, James Storm, Bobby Lashley, & EC3.  This is the first TNA trading cards since 2013. 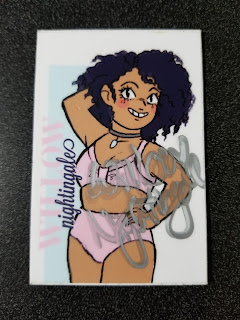 This isn't a trading card but a sticker, it is a little smaller than trading card size but it works for me.  I can't say enough positive about Willow.  This was my first time seeing her in person in the ring and she is really good, not to mention a fantastic personality and a pleasure to talk to.  She's coming back to Limitless next month and I look forward to seeing her in the ring again.

Later Readers!
Posted by Michael J. Labbe at 6:32 AM