If you're anything like me the name Mark Young probably doesn't ring any bells.  Then you find out he's a second generation wrestler and the mystery continues.  Is he related to legendary referee Tommy Young, to the Youngblood family, or perhaps even the Great Mae Young?  Incidentally he is not.  Maybe his given name will give it away, Luke Joseph Scarpa Jr.  That's right Mark Young is the son of Chief Jay Strongbow.

Mark Young was born April 23, 1967 and began is wrestling career in 1986 training with the legendary Stu Hart in his infamous dungeon.  He debuted for Stampede Wrestling in late 1986 as Mark Scarpa.

Over the next couple years he would tour the territories with stops in the WWF, Continental Wrestling, AWA, Portland Wrestling, and WCW.  In the Summer of 1989 he began a near year long run with the WWE competing as enhancement talent on TV shows and trading wins on house shows with other enhancement talents. 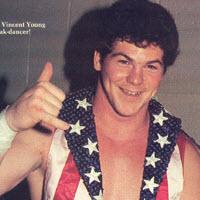 The biggest win of his WWE tenure came on September 30, 1989 in his Madison Square Garden debut in a televised win over Barry Horowitz.

From May to June 1990 he embarked on a three week tour of All Japan Pro Wrestling competing in the Super Power Series as Mark Scarpa.  He wrestled in singles and tag team matches teaming with Dustin Rhodes, Johnny Smith, Terry Gordy, & Abdullah the Butcher.

This is where the information gets a bit sketchy.  Online world of wrestling reports that Mark Young contacted them directly and stated that he broke his neck on the All Japan tour continued to wrestle for a month after the incident.  He then returned home to the US, got surgery, and retired.

However other information on the internet states that when he returned from Japan he competed in the Global Wrestling Federation under the name Todd Overbow out of Dallas, Texas. 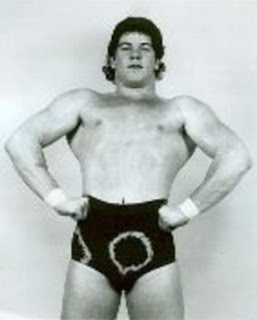 His matches lessened in 1991 - 1993 where he had sporadic matches for WWE, WCW, GWF, & Mid-South Wrestling.  His last match was on May 8, 1993 in Highlandstown, Maryland for Mid-Eastern Wrestling Federation teaming with Trent Young as Vince Young in a losing effort to Joe Thunder & Johnny Blaze.