Who is the most prolific tag team wrestler

In my lifetime there have been a few teams with longevity that is unreal.  For example The Rock n' Roll Express have been teaming since 1983 and are still going strong and The Road Warriors and The Dudley Boys were together for twenty years. 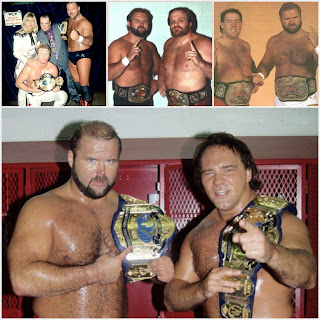 Once he arrived in the Carolina's he began teaming with Ole Anderson as The Minnesota Wrecking Crew.  Together the Anderson's captured the NWA National Tag Team Championships on April 28, 1985 holding them until early 1986 when Ole was injured.  The titles were later abandoned and replaced with the United States Tag Team Championships.

In total Anderson had 11 reigns as Tag Team Champion with 7 different partners. 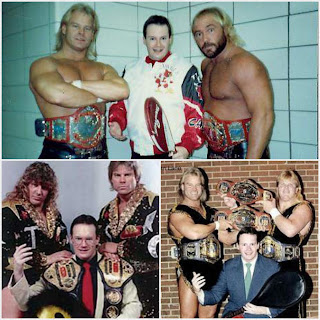 Stan Lane
Stan Lane was a Fabulous One, a Heavenly Body, a former member of the Midnight Express, and a 33 time tag team champion.

From 1982 until 1987 Steve Keirn and Stan Lane teamed as the Fabulous Ones touring the Southern territories and setting them on fire.  They captured the tag team championships twenty times in four different promotions including becoming 15 time AWA Southern Champions.  After breaking up they reunited briefly in 1991 in the USWA adding championship to their Legacy.

Lane joined the Midnight Express in early 1987 and it didn't take long for the duo to win tag team gold as he and partner Bobby Eaton defeated Ronnie Garvin & Barry Windham just four months after their formation.  They would hold the US Tag Team titles twice and the World Tag Team Championships one time during their near four year run as partners.

April 9, 1992 Lane arrived in Smoky Mountain wrestling teaming with Tom Prichard to form The Heavenly Bodies managed by Jim Cornette.  The were the first ever SMW Tag Team Champions and just over a year later in May 1993 Lane left the team having held the titles five times.

In an interesting twist, Stan Lane wrestled his first match as a member of the Midnight Express on January 1, 1987 in Atlanta for Mid-Atlantic Championship Wrestling and is final match as a member of The Fabulous Ones in a Barbed-Wire Cage Match in the CWA on February 16, 1987. 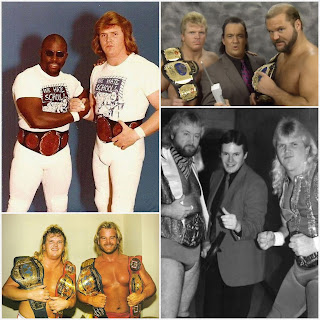 "Beautiful" Bobby Eaton
Best known as being one half of the Midnight Express with "Loverboy" Dennis Condrey and later "Sweet" Stan Lane, Eaton has 23 reigns as tag team champion with ten different partners. 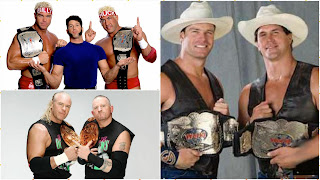 Gunn first teamed with Road Dogg Jesse James on the October 4, 1997 episode of Monday Night Raw.  over the next 18 years the duo would team on and off in multiple promotions including the WWE, TNA, and a few dozen independent promotions.  Known primarily as New Age Outlaws and being a part of Degeneration-X they also teamed under the names James Gang and Voodoo Kin Mafia in TNA.

In between his time teaming with Road Dogg, Gunn teamed with Chuck Palumbo under the tag team Billy & Chuck.  The duo were only together for about a year holding the World Tag Team Championships two times.  They created a tremendous buzz as their characters portrayed being in a relationship together.


Thanks for reading, please leave a comment, read my other posts, and like my blogs Facebook page and while you at it check out my weekly podcast Podcast of 1,000 Holds on the Nerdy Legion Podcast Network.