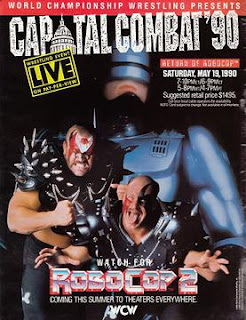 I host a wrestling podcast on the Nerdy Legion Network called Podcast of 1,000 Holds.  Recently my co-host Aaron and I decided to watch a Pay-Per-View to discuss along with the second, quarter, and semi finals rounds of the Mae Young Classic.  We randomly selected WCW's Capital Combat talk about some bad luck.

Tony Schiavone welcomes us to the event

Gary Michael Capetta handled the ring announcing duties.  Capetta truly has a unique voice and I always associate him with that time frame of wrestling in the NWA/WCW.

Warriors come out on the backs of motorcycles while Norman comes out on a scooter.  I wonder if the Warriors was just as confused that they had to team with Norman as I was that they were.  I remember Bigelow being in JCP/WCW in 1988 for a short time, but I don't recall this run here in 1990.  It appears he wrestled three matches in 1990 in WCW April thru June. 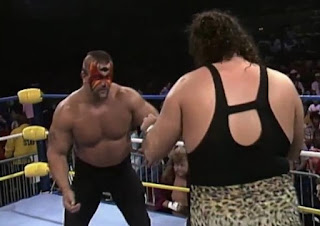 Cactus took a wicked beating from Hawk including being through over the guardrail and having the wooden stairs thrown on him.  In an impressive show of strength Bigelow overhead suplex the 400lb Norman.  Hawk pinned Sullivan after a clothesline off the top rope.

It's weird seeing the Undertaker with no tattoos.  This match wasn't anything special.  Finish came when Marc dropped an impressive elbow drop off the top rope after taking two steps down the rope.  This move registered an unbelievable 8.2 on the slam-o-meter!

Gordon Solie lowers himself and does a backstage segment looking for Robocop and talking about the Sting and his little Stingers.

As and kid and even now I just love the name The SST.  I was actually disappointed to find out that, that wasn't their name that it stood for something.  Savage is Sam Fatu better known as The Tonga Kid or Tama of the Islanders.

As good as Rich and Rotunda are individually there is no way they should win this match as the SST are not only a team but family and an established team should always beat two random guys thrown together.

At one point Rotunda was caught in a front face lock, Randy Anderson checked his hand and it dropped five times, yet he never called for the bell.  So Rotunda takes a beating for ten minutes or better, finally tags in Rich who after a couple minutes slaps on a sleeper, gets hit from behind and is promptly pinned.

Missy Hyatt was the special guest ring announcer
Ok, a hair match where one of the competitors is not just balding, but the top of his head is completely bald, the just had the crown around the sides and back.  Ellering is already in the ring, Long gets the full music introduction, he comes out wearing boxing gloves and head gear.  Long tries to cheat, but Ellering pulls off the loaded boxing clove eventually knocking Long out with it. 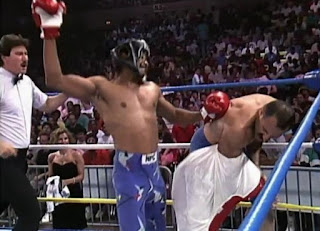 The stylist quickly cuts off a few clumps but doesn't shave it all off.  Also Capetta announced the winner so apparently Hyatt only had introduction duties.

Cornette was to be locked into a cage at ringside, but of course he refused.  Z-Man and Pilman dispose to the Midnights and lock him in it much to the delight of the crowd.  Instead of being suspended above the ring, it was on wheels and pushed halfway down the aisle.

I really dislike that the Midnight Express' theme is dubbed over with the worst generic rock music.  The me their theme is one of the more iconic themes in wrestling. Late in the match Eaton landed a spectacular Alabama Jam onto Pillman.

Good match when The Midnights picked up the win when Lane "loaded up" his boot and kicked Z-Man on his shoulder and he fell right into a small package from Eaton who got the pin.

We got to Gordon Solie in the back where Robocop is ready to come to the ring.  For some reason the cop of the future as a security force.  The camera breaks up and we catch glimpses of Robocop before we lose the feed.  We lost the feed from out back.

Sting comes the ring, I like when Capetta introduces Robocop he lists his prime directives.  As Robocop is making his entrance the Horsemen lock Sting into Cornette's cage.  Robocop then easily bends two bars in the center of the door which pops open as.  Robocop then pushes the door closed and "rips" it off the hinges.  The Horsemen run, Cops left leg panel half breaks off and they leave. 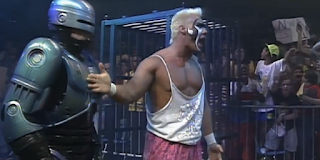 Robo never said anything neither did Sting.  I wonder what he wanted.

Tony Shiavone interviews The Junkyard Dog who's happy to be back in WCW.  Cornette comes out

The Express comes out on a motorized platform that has a jukebox on it.  This is a standard tag team match with leather straps attached to each ring post so they can use them whenever they want.

A few minutes into the match the Rock n' Rolls got their hands on the straps and let the Freebirds feel the leather.  Then for some reason they put the straps back on the ringposts and went back to having a standard tag team match. 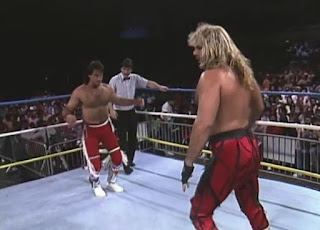 Eventually Hayes and Gibson are in the ring together and bot have a strap however it's not long until the Rock n' Rolls get them and chase the birds out of the ring.  And then the put the straps away, seriously this is dumb.

Hayes has Gibson set up for a DDT, Morton came off the top rope with a sunset flip getting the three count.  They barely used the straps, they shouldn't have been in the match.

Tony Shiavone interviews Doug Furnace, they don't talk about him but about Lex Luger.  Furnace leaves and Sting comes out.  He also talks about Luger.  The angle is that Luger just got out of the hospital and has been advised by doctors not to compete.

This was four guys basically barely selling anything.  We saw repeated bodyslams on the floor, and yet the finish is when Rick Steiner is going to belly to belly suplex Reed from the second rope and Simmons pulls Rick down by the hair and Reed falls on him for the pin.

The story they keep selling is that Luger just got out of the hospital and shouldn't be competing. This is not a typical cage that is up against the ropes, it sits on the floor outside the ring like Hell in a Cell, however it has bars similar to the old WWF Blue Steel Cage.

The referee checks Woman and finds a foreign object in her glove.  I'm surprised that she is staying inside the cage on the floor area.  Decent enough match I guess, Flair works hard, gets busted open and bleeds a pint. 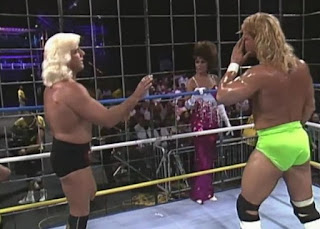 The Horsemen: Arn, Ole, & Sid come to ringside trying to get in the cage, they can't.  Sting comes to stop them and doesn't fare well.  El Gigante comes out to aid Sting in chasing off the Horsemen.  Ole get's control of the cage and raises it up so Windham can get in, Luger has Flair in the torture rack and Windham attacks for the DQ.  The rest of the Horsemen get under the cage and Ole lowers it.

Finally the cage raises and and Sting gets in, El Gigante just stands there.  The Horsemen calmly leave and Flair is interviewed in the aisle by Tony Schiavone and he cuts and unintelligible promo until Sting attacks Flair and the Horsemen retreat.


Thanks for reading, please leave a comment, read my other posts, and like my blogs Facebook page and while you at it check out my weekly podcast Podcast of 1,000 Holds on the Nerdy Legion Podcast Network.