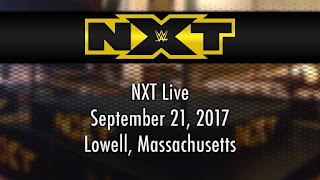 Here is my review of NXT in Lowell, Massachusetts on September 21, 2017

Match 1: The Street Profits: Angelo Dawkins & Montez Ford defeated Riddick Moss & Tino Sabbatelli
About as basic of a tag team match they could have possibly had. Not the way I would have opened the show.
5/10


Match 2: Lars Sullivan defeated Oney Lorcan
This was a 3 minute squash but Oney did get in a little bit of offense before he got annihilated. Great ovation for Lorcan before and after the match.
4.5/10

Match 4: Roderick Strong defeated Hideo Itami
Solid match but not nearly as good as I would have expected. Roddy hit a couple sick backbreakers.
6/10

Match 5: The Undisputed Era: Adam Cole, Bobby Fish & Kyle O'Reilly fought Sanity: Eric Young, Alexander Wolfe & Killian Dain to a no contest
This was a good match until the awful ending. Fish and O'Reilly were double teaming Dain when the referee called for the bell. It seemed that it was a DQ but it was ruled a No Contest which made no sense.
6/10

Match 6: Johnny Gargano defeated Raul Mendoza
Awesome match. These guys really put on a show and it really stood out on a show that was full of average at best wrestling. Mendoza even hit a coast to coast which was pretty sweet. Match of the night by about 10 miles.
9/10

Match 7: Kiri Sane defeated Sonya Deville
Solid match with both impressing just the match had to many awkward spots. In the end Sane got the win with her sick top rope elbow.
6/10

Match 8: NXT Champion Drew McIntyre defeated Andrade Almas to retain
This was your typical WWE house show main event. They did just enough to get by and nothing really more.
5.75/10

In Ring: After the main event, The Undisputed Era came out and attacked Drew Mcintyre. Johnny Gargano, Oney Lorcan and The Street Profits tried to make the save but they got beat down too, until Sanity came out and chased off Fish and O'Reilly leaving Cole to get wrecked by everyone in the ring.

This show scored a 46.25 out of 80 for an overall score of 57.81%. After the first match was so average and basic, this show just became a typical WWE house show, except for Gargano vs. Mendoza, that was pretty awesome. If NXT comes back to New England again I won't be in attendance. I was really disappointed with this show.